No damage or injuries have been reported 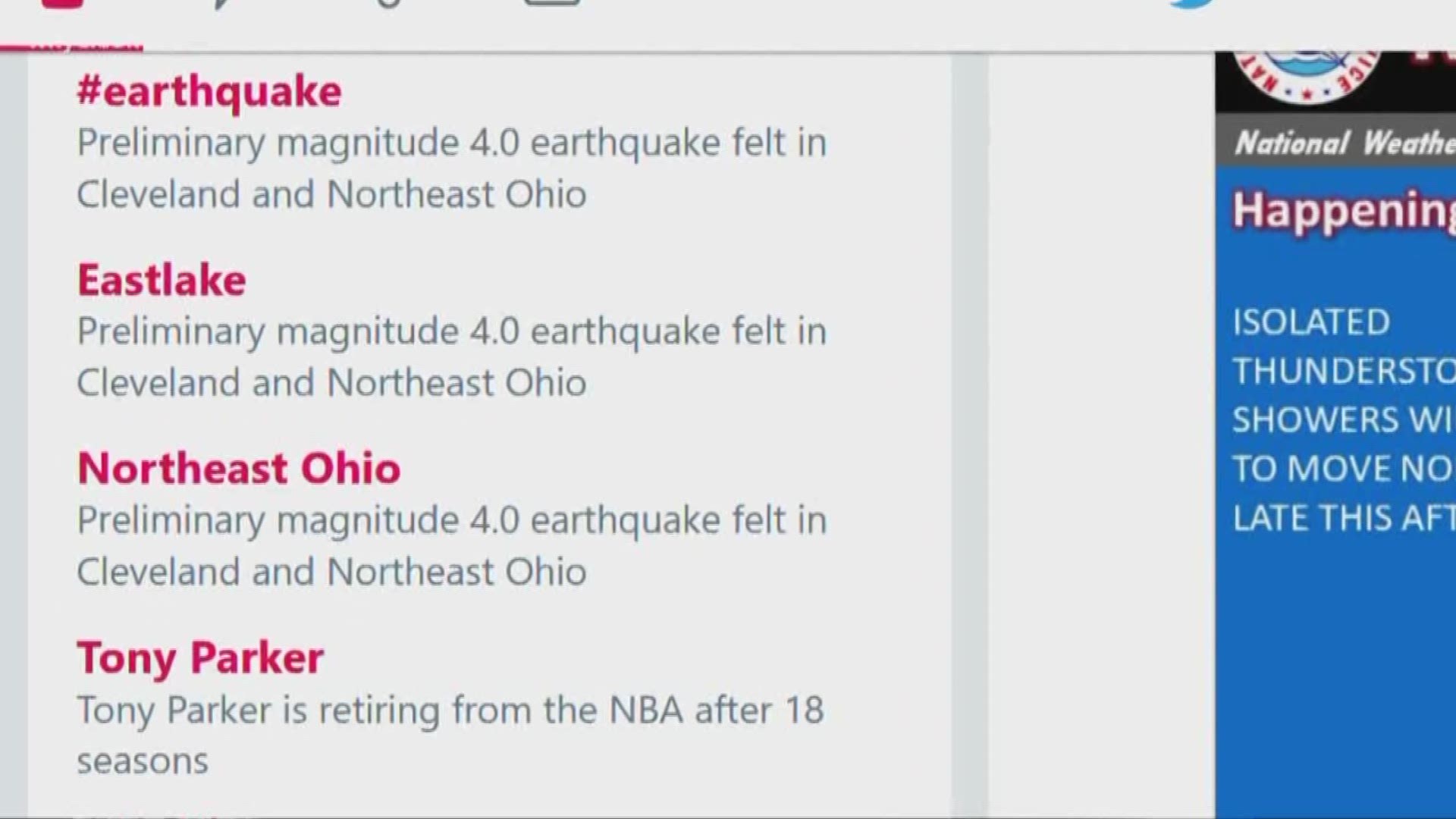 LAKE COUNTY, Ohio — Did you feel it?

WKYC Chief Meteorologist Betsy Kling confirmed that an earthquake did indeed occur on Monday at 10:51 a.m. According to the U.S. Geological Survey, the quake had a magnitude of 4.0.

“I felt a shake but heard something different than normal,” Kling tweeted.

Kling said the quake itself was recorded 3.1 miles deep and 2.5 miles from Eastlake.

The Ohio Department of Natural Resources reported that a 'naturally occurring' earthquake struck a half-mile off the coast of Eastlake along the south edge of Lake Erie. The earthquake registered at 4.2 and was followed by a series of aftershocks ranging from 2.1 to 2.5.

Not long after the quake took place, Betsy went live on WKYC's Facebook Live and YouTube to answer questions and give a report as to what happened. 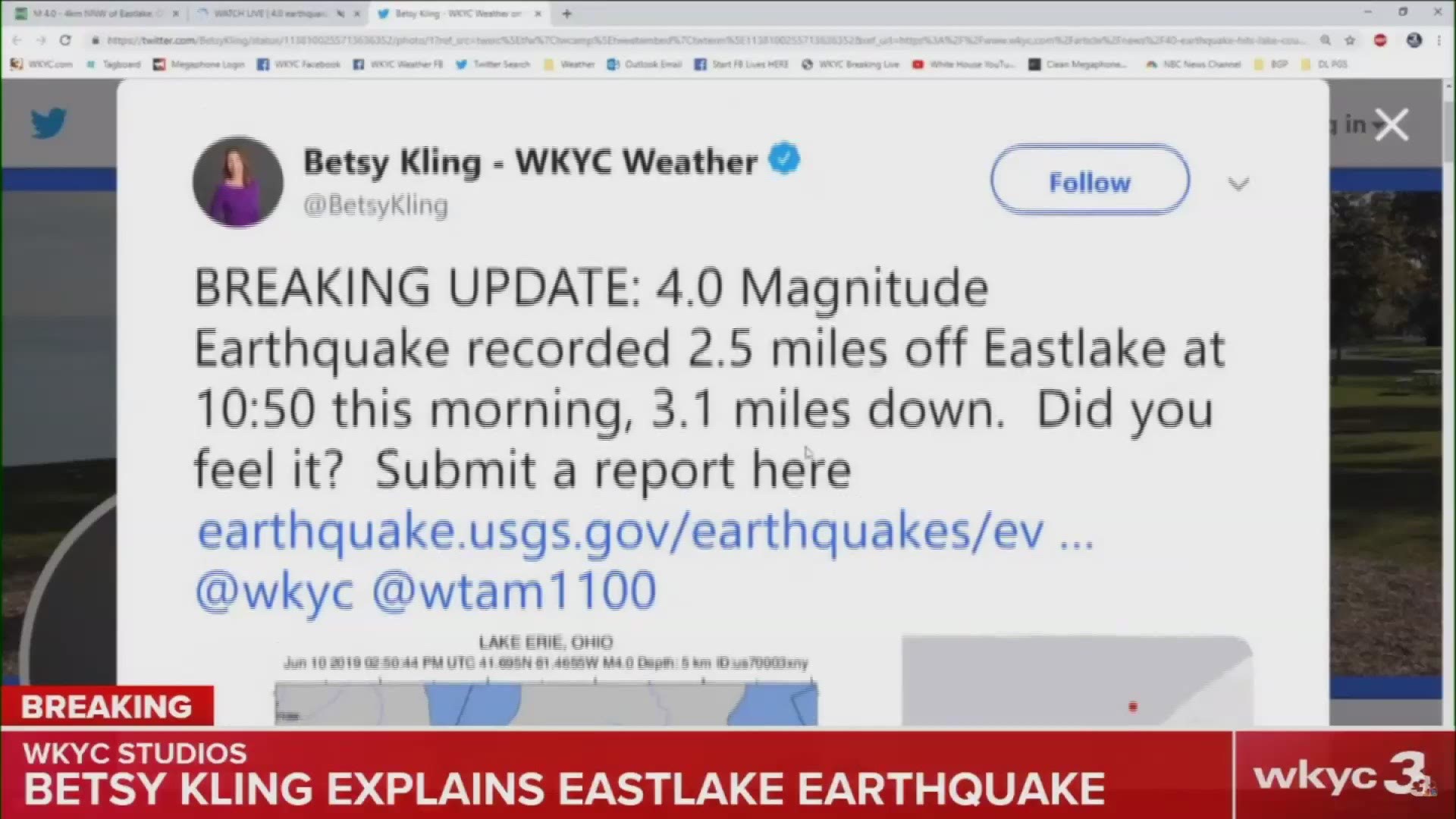 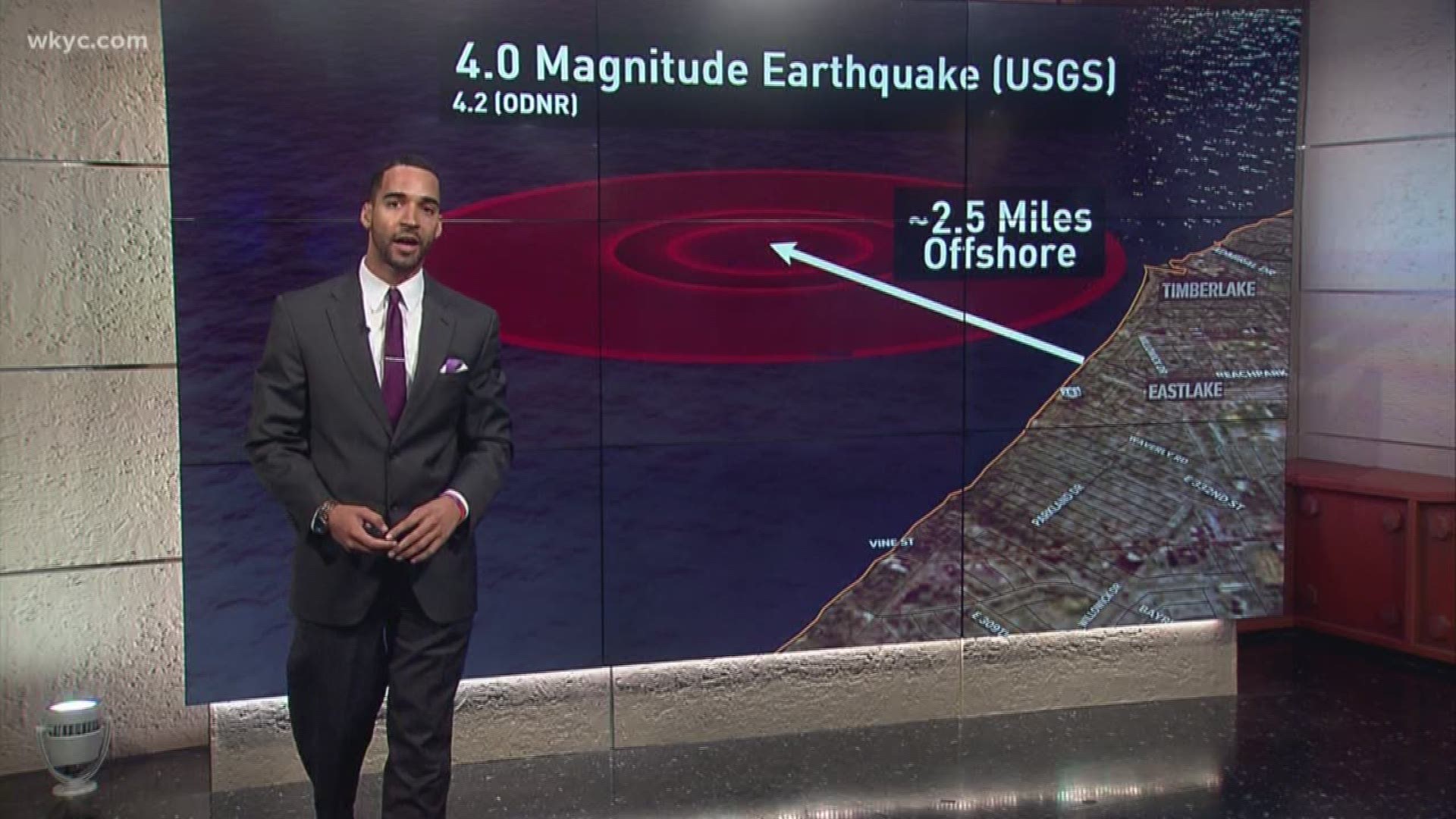 RELATED: 5 things to know about Dr. Richter and his scale

According to the Cuyahoga County Office of Emergency Management, there have been no reports of any injuries or damage.

Lake County authorities said their 911 dispatch has been overwhelmed by calls as a result of the quake. Mentor Dispatch fielded 182 calls in 20 minutes following the earthquake. A dispatcher would normally receive 200 calls during their entire eight-hour shift.

Not far from Eastlake is the Perry Nuclear Power Plant. We reached out to FirstEnergy to see how conditions were at the plant following the earthquake and were told: "Our plant workers have completed their inspection of the plant after this morning’s earthquake. No seismic activity was recorded on the plant’s geological equipment, and the plant inspection revealed no issues. The plant is designed to withstand an earthquake measured at 6.0 at the plant site, and continues to operate at 100 percent power. "

Also near Eastlake is the Morton Salt mine in Fairport Harbor. Senior Communications Manager Paul Jackiewicz tells us the mine was "unaffected by the earthquake reported in the Northeast Ohio region today. All of our employees who were on-site at the time of the earthquake are accounted for and safe. At Morton Salt, nothing is more important than the safety of our employees, so we are performing comprehensive inspections on the surface and underground to assess the potential impact of the earthquake to confirm it did not compromise the integrity of our operations.”

We also reached out to Cargill Salt, which operates a mine directly below Lake Erie. "We are aware of the earthquake and our Cleveland team are all safe and the mine is operating as usual. We constantly monitor the mine and have rigorous safety protocols in place to ensure a safe environment for our team at all times," according to a company spokesperson.

Want to hear what the earthquake sounded like? The Incorporated Research Institutions for Seismology has enabled us to listen to the quake from the nearest available seismic station at Standing Stone, Pennsylvania. Click here

Social media reaction has been pouring in:

- Jewels Johnson in Euclid: "The wall behind me shook & it felt like someone was jackhammering in the garage. Couldn't figure out what was going on! Happy to know I didn't imagine it!"

- Karen Vitello: "I felt it in Mayfield Heights! I thought someone was breaking into my apartment!"

- Dennis Miller: "Felt it in Copley, very light but the house shook."

- Casey Fister Moser: "I felt it @ Akron Children's Hospital. I thought my mind was playing tricks on me!"

- Indira Gatlin: "My dog went crazy a few seconds before ....then it shook."

The great people at Mentor Family Foods posted this video on their Facebook Page: 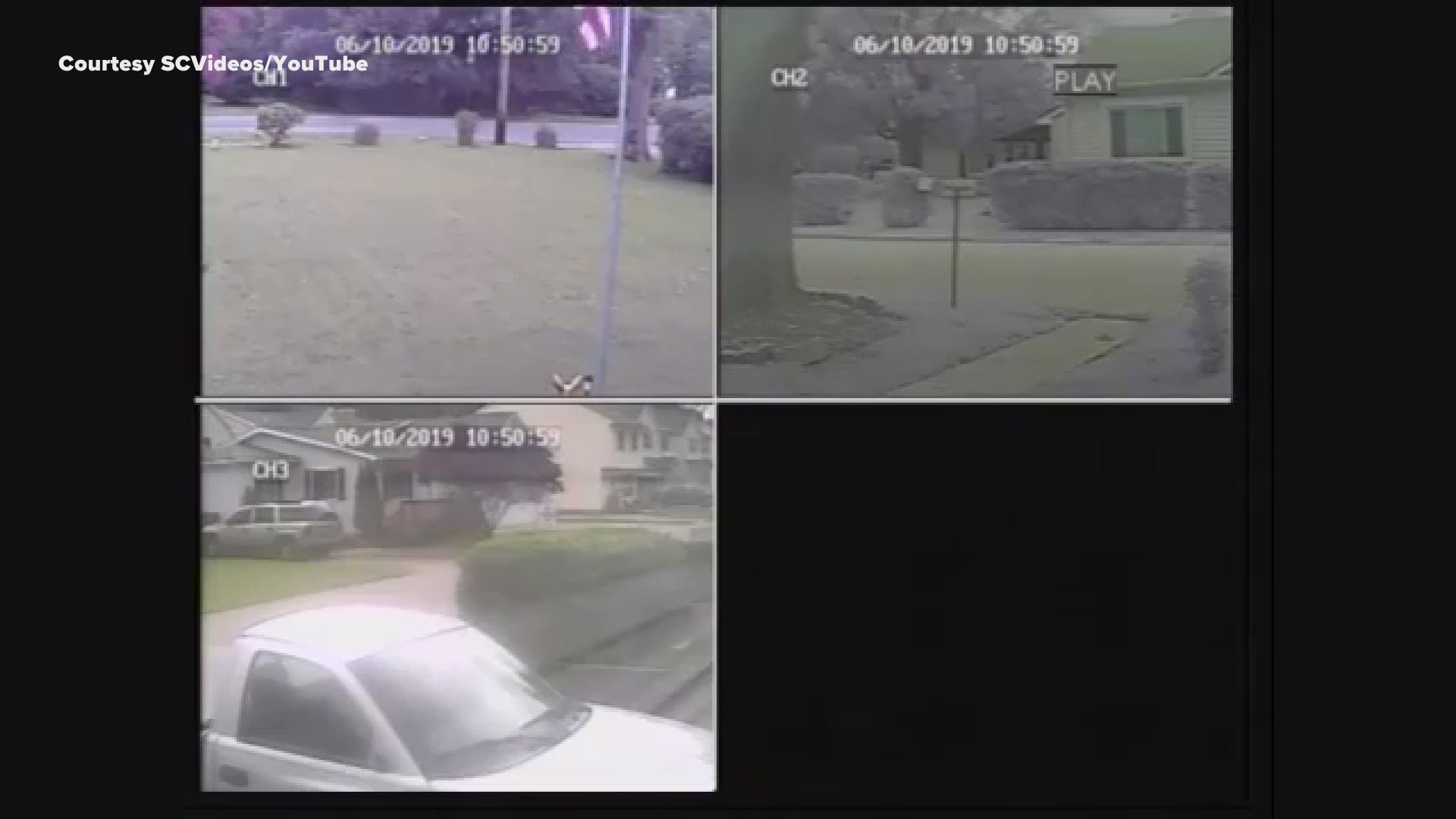