Former President Trump reinvigorates his base in Wellington rally, remains critical of election, opponents and immigration

Trump was in Lorain County campaigning for Max Miller, who is trying to unseat U.S. Rep. Anthony Gonzalez after the latter voted to impeach Trump back in January. 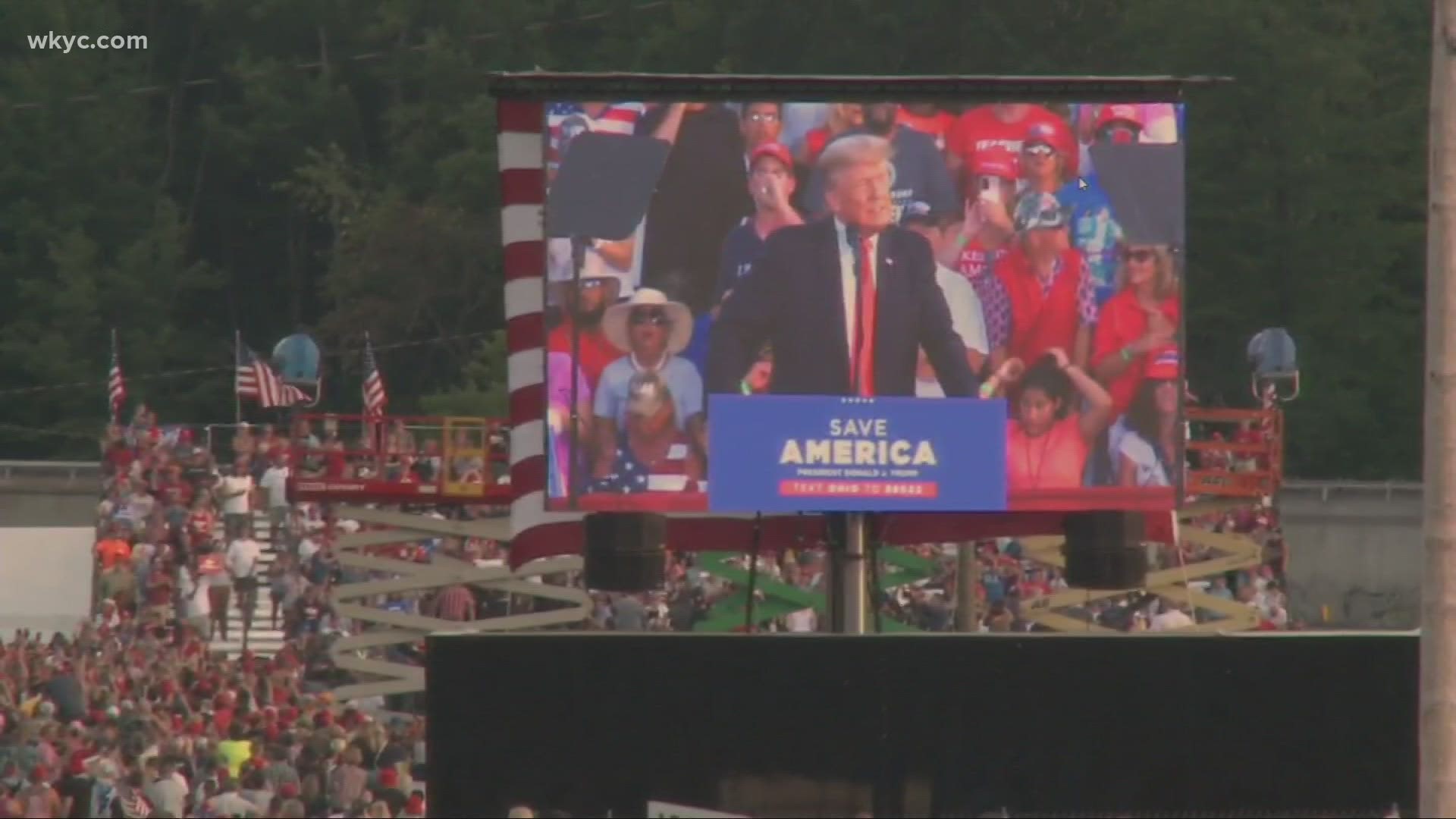 WELLINGTON, Ohio — Speaking to thousands at the Lorain County Fairgrounds, former President Donald Trump rallied his base of supporters with the same attacks on Democratic policies he made during the 2020 campaign, many of equally exaggerated or false.

He thanked Ohio for backing him in the 2020 election, but continued to push the conspiracy – refuted by elections officials and judges – that he won the election.

"Thank you for letting us win in the great state of Ohio," Trump said Saturday in Wellington. "We have won in a lot of places they haven’t figured out yet."

For more than 90 minutes, Trump followed prepared remarks from a teleprompter, but at times admitted to just "winging it." He complained that Democratic polices on energy, China and the economy are harming America. He also complained about "critical race theory" – a new cultural wedge issue involving the history of race.

The former president spent more than 15 minutes talking about immigration – an issue that was key to his 2016 presidential win and one that remains top of mind among those at the rally.

"We built almost 500 miles of beautiful and very successful southern wall," he remarked.

Columbus' Judy Lageman brought he family – including grandchildren – to the rally, in part to show support for the former president's immigration policies.

"We just have stick together and unite in a peaceful and organized way and he will bring it," she told 3News. "We knew we had to come, and this is our first rally, and it won’t be our last."

Trump also talked up candidates for Congress, including a former aide Max Miller, who is running in Ohio's 16th congressional district against fellow Republican Anthony Gonzalez. The incumbent Gonzalez is under fire for voting to impeach Trump after the Jan. 6 attack on the U.S. Capital.

"You have to deliver a massive majority in Congress," Trump told the crowd. "Max Miller, he loves our country, and [was a] trusted aide in the White House. ... We had some real losers, [but] we had some real great people

Gonzalez has remained relatively quiet, but issued a statement days before the rally calling Miller "an errand boy who fetched Diet Cokes" while he himself was working hard in Congress. Meanwhile, the ex-president kept circling back to the midterms in 2022.

Trump did not announce that he plans to seek the White House again, and he is facing potential legal trouble that could hinder another run. The Manhattan District Attorney is considering filing charges against the Trump Organization soon related to long-standing criminal probe of his tax issues.

But for now, crowds like this are willing to send him back to Washington.