Lorain teachers push for change, call out CEO for 'power play' in battle against school board

The attorney for the school board indicated that according to state law, employees must be paid

LORAIN, Ohio — It has been messy beginning to the school year in Lorain, where teachers are concerned that they may not get paid.

On Tuesday, there were two meetings to try to set things right.

The first involved the Academic Distress Commission, where the agenda was dropped in order to make room for public comment.

Teachers had a lot to say.

First, there is the treasurer who accepted another job. Though the district’s CEO, David Hardy Jr, approved it, the Lorain School Board sued to keep him in place.

This week Hardy sent a letter, in turn, saying that pay for the district’s 900 employees could be in jeopardy since he cannot hire a new treasurer due to the lawsuit.

At the Academic Distress Commission meeting, some teachers called that a power play.

“At the end of that letter it basically said, 'Stand with me or stand with the board' and I choose to stand with our kids,” said Jessica Castro, “Because that’s what’s important.”

Teachers also called out House Bill 70, which allowed the state to assume control over the district when it was under performing.

“We were moving in the right direction,” said teacher Tony Dimacchia. “But the people in Columbus want to ride out this guy’s contract while he devastates this district even further. That is an issue.”

Similar comments were heard at the school board meeting.

According to the board's attorney, by state law employees must be paid.  The treasurer is currently still showing up for work in Lorain.

District employees were happy to hear their pay is not at risk.

"A lot of us are like paycheck to paycheck so that would really be rough for us but hearing this, that's a big help, it's great, it's a weight off our shoulders," explains president of the custodian union, Verena Edwards.

Late Tuesday night, Lorain City Schools Board of Education President Mark Ballard delivered a strong rebuke to Hardy's contention that the restraining order would stop staff and teachers from being paid.

“This is yet another scare tactic and fabrication from Mr. Hardy, designed to deflect blame for his failures,” said Ballard in a release. “The fact is, any responsible leader would not leave a school district in this much turmoil, without a treasurer. It is irresponsible and harmful for Hardy to release one of the only district employees left who understands where the money went. If Hardy wants a renewal levy, this was the exact wrong way to show our community that he respects us and is a good steward of our local funding.”

You can read the entire statement below. 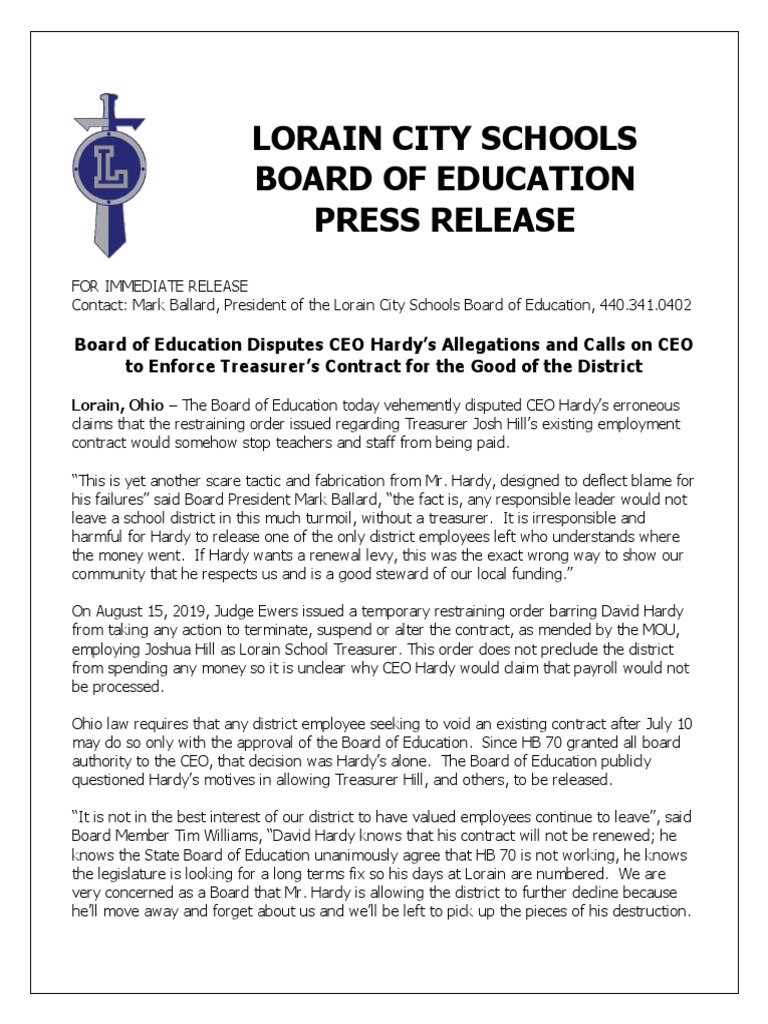 Lorain School Board President gives response to CEO allegations | Government | Politics
BOARD OF EDUCATION PRESS RELEASEFOR IMMEDIATE RELEASEContact: Mark Ballard, President of the Lorain City Schools Board of Education, 440.341.0402 to Enforce Treasurer's Contract for the Good of the District Lorain, Ohio - The Board of Education today vehemently disputed CEO Hardy's erroneousclaims that the restraining order issued regarding Treasurer Josh Hill's existing employmentcontract would somehow stop teachers and staff from being paid.