There's a troubling cycle inside our addiction epidemic. 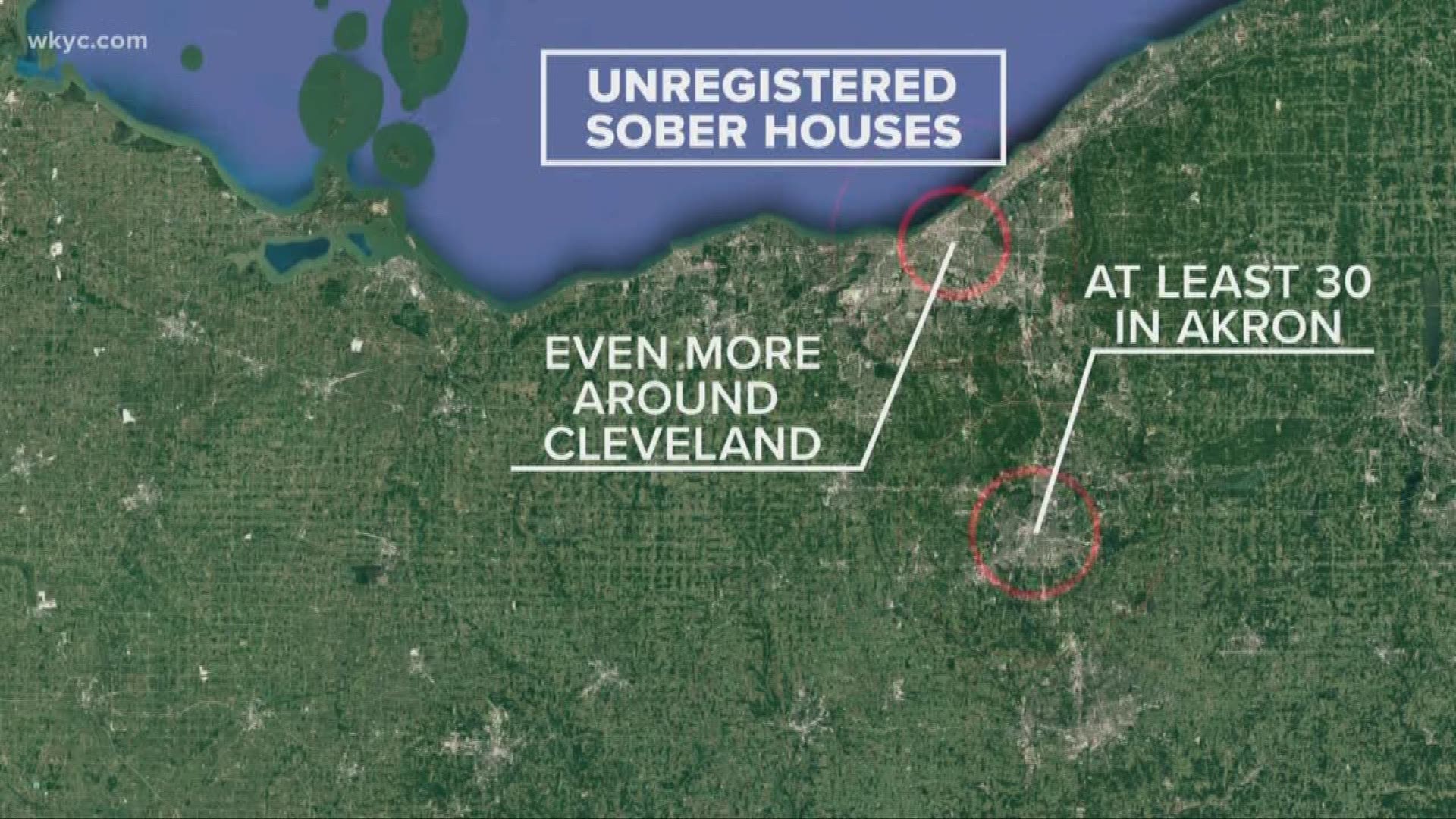 AKRON -- His recovery from addiction almost killed him.

“I relapsed, and it got so bad that I got into such despair I was going to take my own life," Bruce Watson said.

His demons reemerged, not at a bar or on the streets, but inside a recovery home near Youngstown, billed as a sober living house.

These are group homes where addicts recover together. And they’re popping up all over Ohio.

The fact that his “rock bottom” came inside a place where Watson went for help underscores a troubling cycle inside our addiction epidemic.

While many sober houses help addicts in recovery, other facilities do little more than provide profits for landlords.

“It’s about the money,” Watson said.

The fact is, basically anyone in Ohio can open a sober house, renting rooms for hundreds of dollars a month. Inside, there’s often no counseling, no programming, but plenty of temptation.

“Heroin, meth, you want to smoke a joint you can probably sneak one out back, ya know,” said David Webb, a former sober house resident. "So, it was easier to go find the drug dealer than it was to see the counselor.”

Those within the recovery network say sober houses are popping up all over Northeast Ohio, often in low-income neighborhoods where property values are low.

The houses are often unkempt, unsafe and unsanitary, some say.

And because they’re not required to register with the state, it’s unclear exactly where and how many are operating.

Sobriety advocates say there’s at least 30 around Akron; even more around Cleveland. And scores of others in between.

For the operators, that’s thousands in profits.

For drug dealers, it’s a captive audience to target.

And for the addicted, it’s a game of Russian roulette.

Judge Jill Lanzinger has seen the epidemic's death toll, as an attorney and from her bench on the Summit County Common Pleas court.

"My concern is that they're unregulated, that someone could start a sober house with bad intents and take advantage of a very vulnerable population, and that is people that are addicted to drugs," she said.

The opioid epidemic has killed thousands of Ohioans over the past decade. As a result, recovery has turned into a multi-million dollar industry that involves detox, treatment and recovery.

Ohio Recovery Housing is the state agency that oversees sober houses, but only those that voluntarily choose to register. Those registered houses generally accept some form of government funding.

ORH will inspect the sites, as well as their policies and procedures.

For unregulated houses, there are no inspections or oversight. And that, some contend, is where the abuses come.

"There's a passion that I have. How can I help somebody else coming out of addiction as they live their lives," said Perry Clark, founder of Truly Reaching You, an Akron-based recovery provider.

His agency, registered with the ORH, has a solid reputation of helping hundreds of men and women overcome drug and alcohol use. His agency provides job skills training, counseling and housing.

Because of his success, Clark says he routinely takes phone calls from individuals looking to enter the recovery business. For some, they’ve stopped selling drugs and have focused on selling recovery.

“It’s just a new way of hustling,” he said. “These guys are no longer selling drugs, but they think I can make money because I have these rental properties and I can house them.

“But I need you to tell me where the money is and how I can get the money.”

Many of these new providers do nothing except collect rent, he said.

"There’s no structure,” Clark said. “For us to come clean, we must have a structure. Without it, you have sober houses that I like to think they're flop houses, a place to sleep and leave."

In Akron's North Hil neighborhood, Kent Keesy runs Sterling Sober Resources. He has four converted sober houses on York Street and a staff of two, including his girlfriend and a friend. He calls it a "sober campus" where men and women pay about $500 a month for a bedroom.

"If I was in it for the money, I needed to be out of it a long time ago," Keesy said.

Keesy no longer accepts government funding, and therefore is not subjected any regulations by ORH. There are no counselors, although Keesy points out that he, as a recovering addict of 27 years, is available to any of his two dozen clients.

Clients are required to remain drug and alcohol free and attend meetings. Counseling is outsourced, he said.

"There's some who are trying to make a lot of money off people in need. They say there's a lot of drug use at sober houses and certainly those people are absolutely correct--- at some sober houses," Keesy said.

Denny Wilson, of F.I. Community Housing agrees. He’s in the process of raising awareness locally and in the State House to bring tighter scrutiny of the wayward sober houses.

He said without more oversight, clients like Wilson will be come more commonplace.

And more will wind up in prison or the morgue.