The announcement comes following tweets by President Trump on the matter. 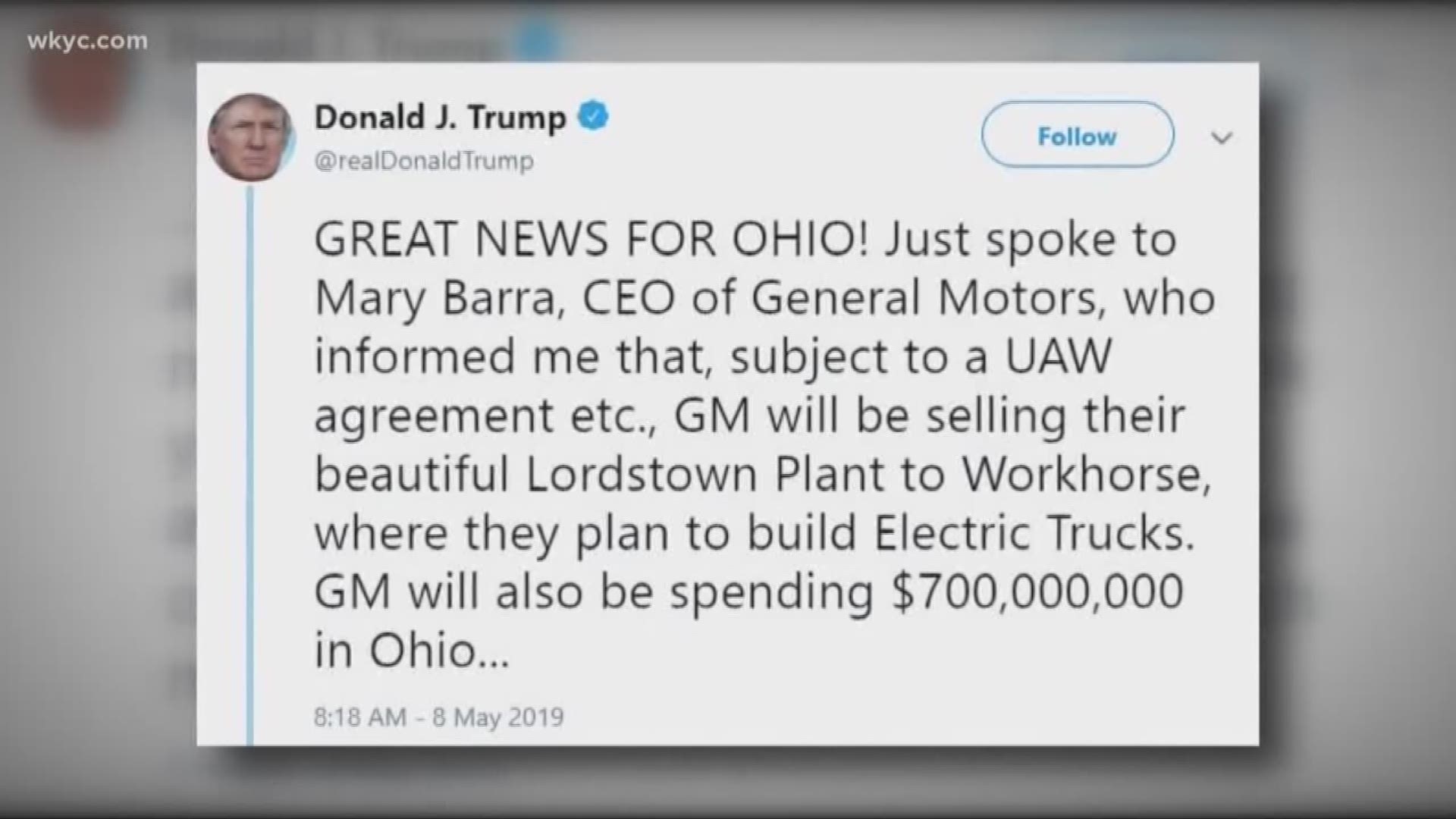 It appears Lordstown's now-vacant auto manufacturing plant could be getting a second life.

President Donald Trump tweeted Wednesday that General Motors has agreed to sell its idled Lordstown plant to the Cincinnati-based Workhorse Group, which will build electric trucks at the site. In addition, GM has agreed to invest $700 million in Ohio "in 3 separate locations, creating another 450 jobs."

The president tweeted that he had spoken to GM CEO Mary Barra directly about the developments. Here is his full statement:

"GREAT NEWS FOR OHIO! Just spoke to Mary Barra, CEO of General Motors, who informed me that, subject to a UAW agreement etc., GM will be selling their beautiful Lordstown Plant to Workhorse, where they plan to build Electric Trucks. GM will also be spending $700,000,000 in Ohio in 3 separate locations, creating another 450 jobs. I have been working nicely with GM to get this done. Thank you to Mary B, your GREAT Governor, and Senator Rob Portman. With all the car companies coming back, and much more, THE USA IS BOOMING!"

Trump has been one of GM's harshest critics since the company announced last year it would close the plant and eliminate 14,000 U.S. jobs. The last Chevy Cruze came off the plant line back in March, while the facility officially closed a month later when workers ceased making replacement parts. The plant had been down to one shift at the time it was shut down.

GM later confirmed it is "in discussions" to sell the plant to both Workhorse and "an affiliated, newly formed entity" which Workhorse would hold a minority stake in. Workhorse CEO Duane Hughes said the first vehicle to be produced at the plant would be a commercial electric pickup truck "blending Workhorse’s technology with Lordstown’s manufacturing expertise."

"This potential agreement creates a positive outcome for all parties involved and will help solidify the leadership of Workhorse’s role in the EV community," Hughes said.

In addition, GM confirmed the addition of 450 new manufacturing jobs at already-existing facilities in Parma, Toledo, and Moraine, along with 1,800 planned jobs in Michigan and Kentucky.

"We remain committed to growing manufacturing jobs in the U.S., including in Ohio, and we see this development as a potential win-win for everyone," Mary Barra said. "Workhorse has innovative technologies that could help preserve Lordstown’s more than 50-year tradition of vehicle assembly work."

"GM’s decision is a true testament to the Parma Metal Center’s workers, the management team and the partnership the two share. This is a major commitment that further secures the plant’s future—critical for the workers employed here and crucial for our city and Northeast Ohio. As mayor, I’m proud to serve in a General Motors town. I personally drive a GMC, and the city only buys GM vehicles. This announcement is a huge win for our city."

In regard to Lordstown, any sale would need the approval of the United Auto Workers union, which released a statement saying it "will monitor this situation as it develops":

"In response to General Motors’ announcement today, the UAW’s position is unequivocal: General Motors should assign a product to the Lordstown facility and continue operating it.

"A federal lawsuit filed by the UAW over the closing of the Lordstown, Baltimore and Warren facilities is still pending, and the UAW will continue its effort to protect the contractual rights of its members at these locations.

"The parties regularly discuss product placement issues during National Negotiations which will begin in July of this year.  We will monitor this situation as it develops to determine what course of action will most benefit UAW-represented workers at General Motors."

Local UAW 1112 later held a press conference from Lordstown to discuss the news, referring many questions to the International UAW.

Ohio Gov. Mike DeWine held a press conference Wednesday afternoon to discuss the latest developments. While he said the confirmed 450 GM jobs were "certainly good news," he also seemed to walk back the president's claim of an "agreement," saying it was "probably not yet the date to celebrate." However, he remains hopeful.

Rumors regarding the future and possible reopening of the plant have been discussed for months, with one report even stating Cleveland car dealer Bernie Moreno had a plan to save it that was ultimately rejected. Gov. DeWine had stated his belief GM would not revive the plant on its own, and joined several lawmakers on both sides of the aisle in urging action.

At least one company has already pledged to bring jobs to the area, with TJX Companies purchasing approximately 290 acres of land for a distribution center. DeWine has also asked President Trump to designate Portage County's Camp Garfield as a missile defense site, which he believes would offer relief to the Lordstown area.