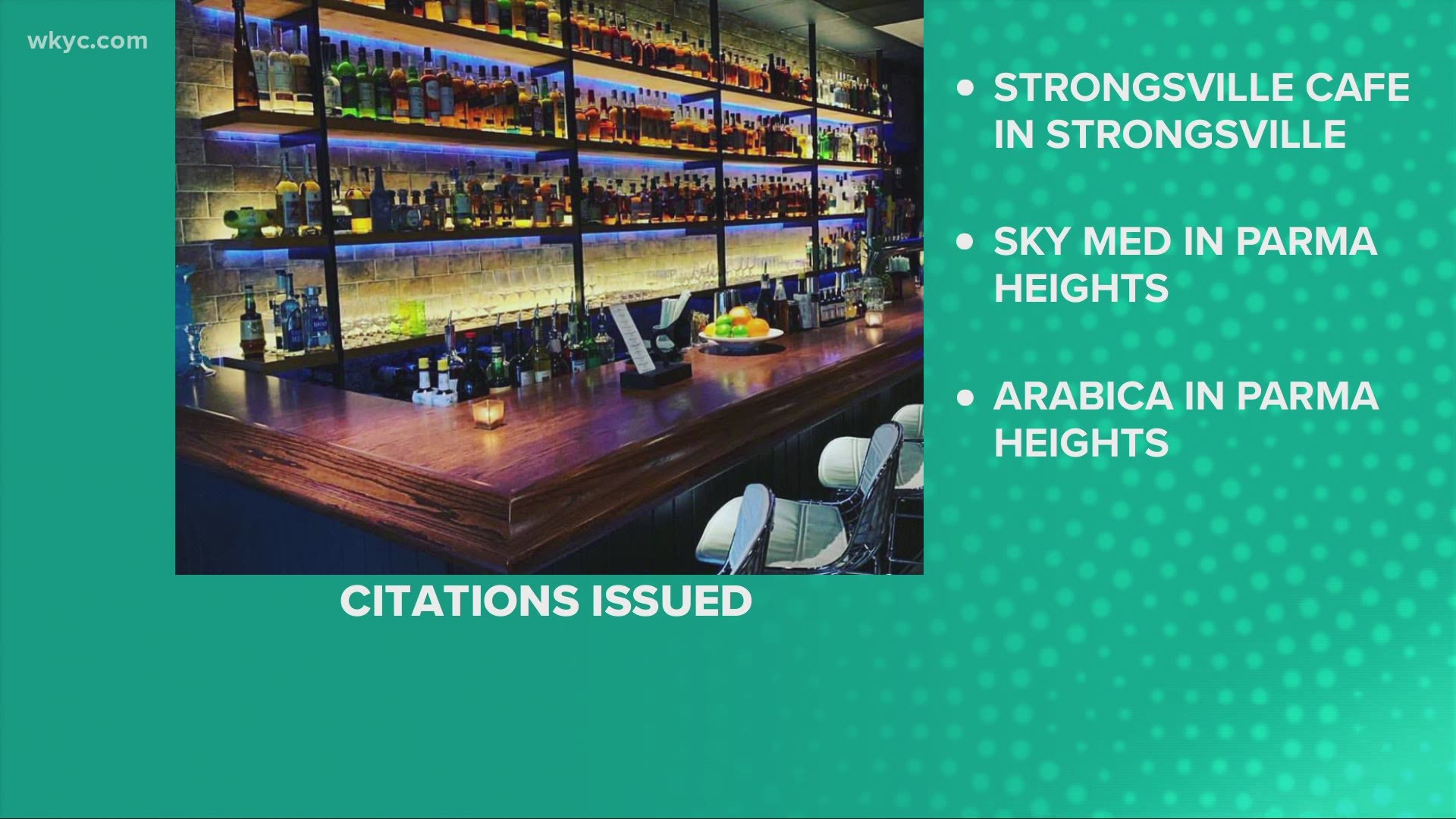 OHIO, USA — As the state of Ohio continues to see a surge in the number of newly reported Coronavirus cases, agents with Ohio's Investigative Unit are still working to enforce health orders issued by Gov. Mike DeWine in an effort to stop the spread of the disease.

On Friday, agents cited four Ohio businesses for failing to comply with the orders in effect. Of the four, three of the establishments are located in Northeast Ohio.

The businesses will now go before the Ohio Liquor Commission and could face the revocation of the liquor license, a suspension or fines of varying amounts depending on offences.

TM Clark LLC., known as Strongsville Café, Strongsville, received a citation for improper conduct – disorderly activity and after hours consumption – Rule 80. At 11:25 p.m., agents found 20 to 25 patrons and the liquor permit holder inside the establishment consuming alcoholic beverages. The patrons were closely gathered with no identifiable safety measures in place throughout the premises to promote social distancing.

MMD Entertainment LLC., known as Sky Mediterranean, Parma Heights, received a citation for improper conduct – disorderly activity, after hours sale – Rule 80 and after hours consumption – Rule 80. Just before midnight, agents found the establishment was heavily occupied with widespread alcoholic beverage consumption and continued beverage sales. There were approximately 150 patrons inside, with egregious violations of health orders. Agents observed little to no social distancing or physical barriers in place as patrons stood and walked freely while consuming alcoholic beverages. Due to the large number of patrons inside, agents were unable to move about the premise without direct physical contact. The liquor permit was cited on October 31 for similar violations.

FOUAD HAFEZ (sole proprietor), known as both Arabica and Dance.com, Parma Heights, received improper conduct – disorderly activity. Agents visited the establishment and observed approximately 125 patrons present with more attempting to enter. Few of those patrons were wearing masks and there were no safety measures in place throughout the premise to promote social distancing . Patrons gathered closely on the dance floor and in the seating areas.

James Sweet LLC., known as Dexter’s Bar, Maumee, received a citation for after hours sale – Rule 80, after hours consumption – Rule 80, and improper conduct – disorderly activities. At 10:50 p.m., agents visited the establishment and observed bar staff serving a beer to a patron. There were numerous patrons inside the bar consuming alcoholic beverages. Groups of patrons congregated in front and on the stage, drinking alcohol past 11 p.m. and not social distancing, while some were dancing.

In addition to the citations above, Officials also visited SED Group Inc., known as V Lounge in Cleveland. The business was found to be violating several health order and operating without a liquor license. They will now faces charges Cleveland Municipal Court.