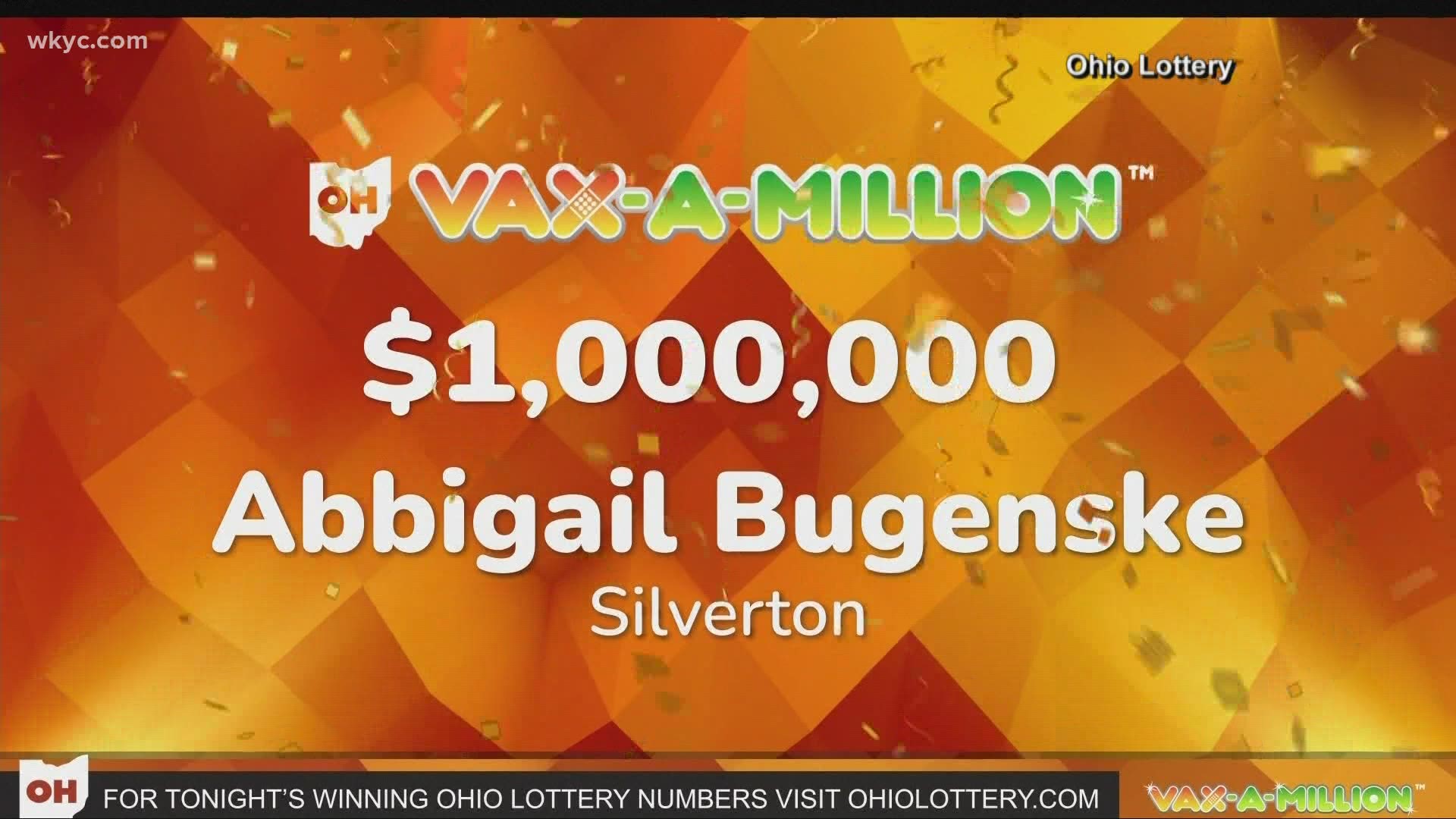 OHIO, USA — On Wednesday, the state of Ohio announced its first $1 million winner in the Vax-a-Million lottery, a unique incentive from Gov. Mike DeWine to encourage more residents to get the COVID-19 vaccine.

Abbigail Bugenske of Silverton in Hamilton County captured the first million-dollar prize. Turns out, she is originally from Shaker Heights, graduating from the high school in 2016.

3News was able to speak with Abbey's family, and while they did not want to go on camera at this time, they did say they are "overwhelmed" and that Abbey called her mom screaming when she found out she had won the money, and wanted to emphasize she got vaccinated before the Vax-a-Million contest was even announced. She earned her college degree from Michigan State just last year, and currently works as an engineer in the Cincinnati area.

In addition to the $1 million drawing, one vaccinated resident between the ages of 12 and 17 won a four-year college scholarship to a state college or university, including room, board and tuition. The first winner of that award is Joseph Costello of Englewood in Montgomery County.

DeWine and his wife Fran visited Joseph and his family Wednesday evening after the results were made public.

Congrats, Joseph! You just won a full-ride college scholarship! If you’re between 12 and 17 years-old and had at least one dose of the vaccine, you could be next! Sign up at https://t.co/ZmJ8iKoSlV! pic.twitter.com/StHlWewhW5

Wednesday's announcement comes two days after state officials pulled the first winner's name Monday afternoon from a pool of 2,758,490 entries. The reason the drawing isn't held live is so state officials have time to verify the winner's information -- including proof of vaccination.

The next four winners will be announced on the following dates:

Here's how the drawing works: Each person who enters is assigned a unique number. A computer then randomly picks one of those numbers as the winner, according to Pat McDonald, who is the Ohio Lottery's director.

DeWine announced on Monday that 2,758,490 of the 5.17 million Ohioans who have begun the process of receiving the vaccine have opted into the lottery for this week's drawing. That means the odds of winning are relatively much better than the Mega Millions lottery, which carries winning odds of 1-in-302-million.

Still, you'd have a better chance at getting struck by lightning, with 1-in-15,300 odds, according to the National Weather Service. Your odds of winning the Vax-a-Million prize are more on par with getting dealt a specific royal flush in poker, with odds of 1-in-2.6-million hands according to Bicycle Cards.