"This is not the way democracy works": Gov. Mike DeWine addresses protests and chaos at U.S. Capitol with 3News' Russ Mitchell

DeWine said the chaos at the Capitol "looked like something that came out of a Third World country, not the United States of America." 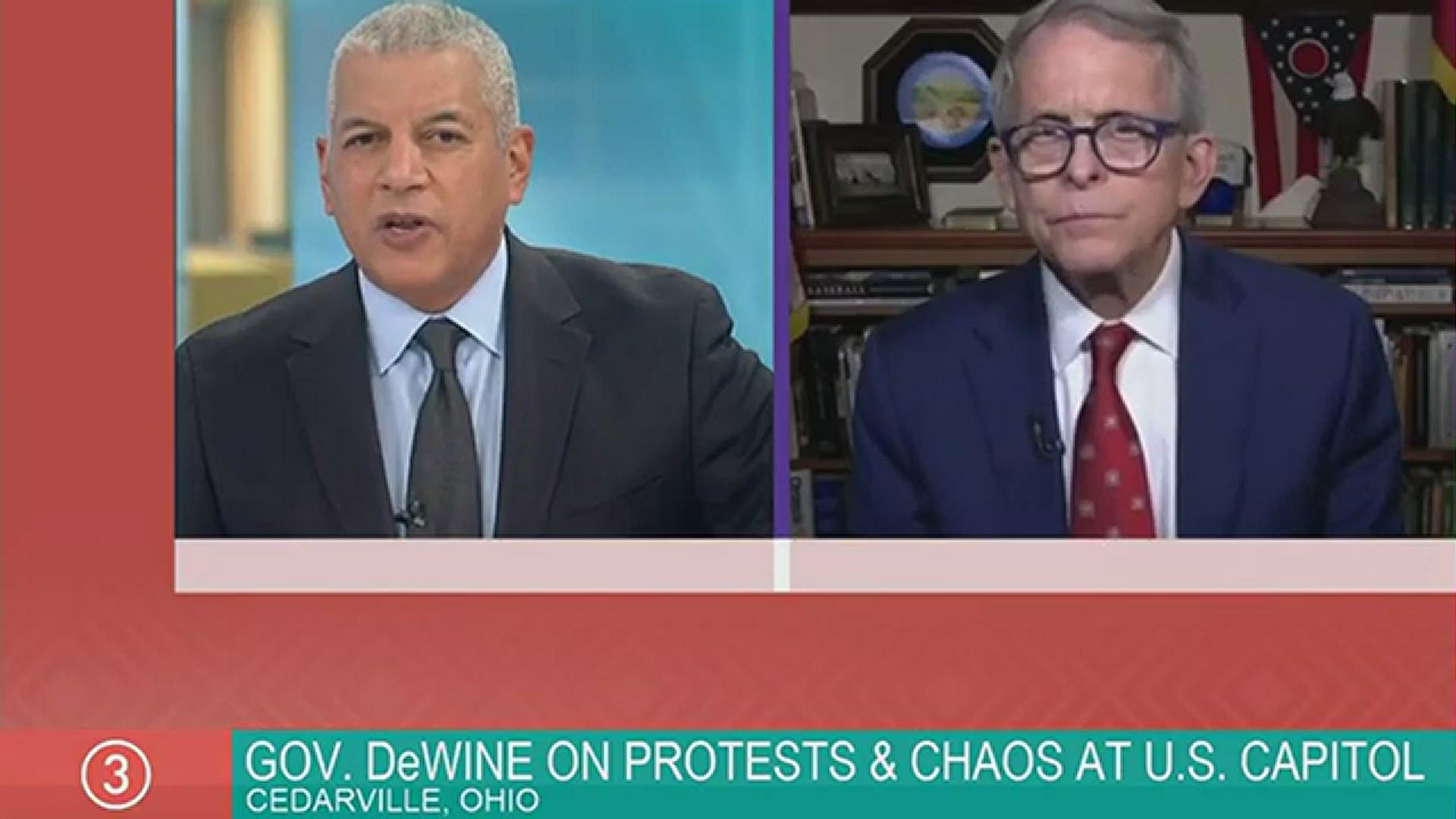 CLEVELAND — Ohio Governor Mike DeWine joined Russ Mitchell for a special one-on-one interview on Wednesday evening to react to the violence and chaos that took place at the U.S. Capitol earlier in the day.

As a joint session of Congress began its deliberations over challenges to Joe Biden's Electoral College victory this afternoon, angry supporters of President Donald Trump stormed the U.S. Capitol marching through the building, shouting and waving Trump and American flags.

The unrest forced a halt to the proceedings and put the Capitol on lockdown. One person was fatally shot, with at least 5 others hospitalized.

"This is a sad day for our country," DeWine told Mitchell. "People who storm the Capitol not only were endangering police officers, but it was a direct attack on our Constitution."

Before becoming Ohio's governor, DeWine spent time both in the House and Senate and got emotional when asked what he felt when the Capitol was breached.

"This is not the way democracy works. Even people who believe President Trump should have been elected or was elected can't be in favor of this," DeWine said. "It looked like something that came out of a Third World country, not the United States of America."

DeWine was among the Ohio politicians to put out a statement condemning the violence, saying the following: "This is an embarrassment to our country. This must stop immediately. The President should call for the demonstrators to leave our Capitol Building. The final step in the constitutional process of electing our president has been disrupted. The stopping of the count of the Electoral College votes has occurred because the security of the U.S. Capitol has been breached by a violent mob. As a nation of laws, this is simply not acceptable. Lawlessness is not acceptable. This is an affront to our Constitution and everything we hold dear. Those who breached the Capitol breached the Constitution. Peaceful demonstrations outside the Capitol are an exercise of the demonstrators’ First Amendment rights. Stopping the constitutional process by which we elect the president is not."

President Donald Trump, in a video message, urged supporters to “go home” but continued to push out false attacks about the presidential election.

Trump opened his video, saying, “I know your pain. I know your hurt. But you have to go home now.” He also went on to call the supporters “very special.” He also said, “we can’t play into the hands of these people. We have to have peace. So go home. We love you. You’re very special.”

"You can love people," DeWine said in response to President Trump's message to his followers. "But you don't want them to break the law."

MORE: Gov. Mike DeWine to 3News on President Trump's message following chaos at Capitol: 'It would have been better if it was just a call to go home'

President-elect Joe Biden referred to the incident as an “unprecedented assault unlike anything we've seen in modern times.” He added that what unfolded was, “an assault on the rule of law like few times we have ever seen it.”

You can watch the entire interview in the player below:

You can see coverage of the violence at the Capitol in the player below: