The Statehouse, other state buildings as well as city buildings in downtown Columbus will be closed through Inauguration Day due to the possibility of protests. 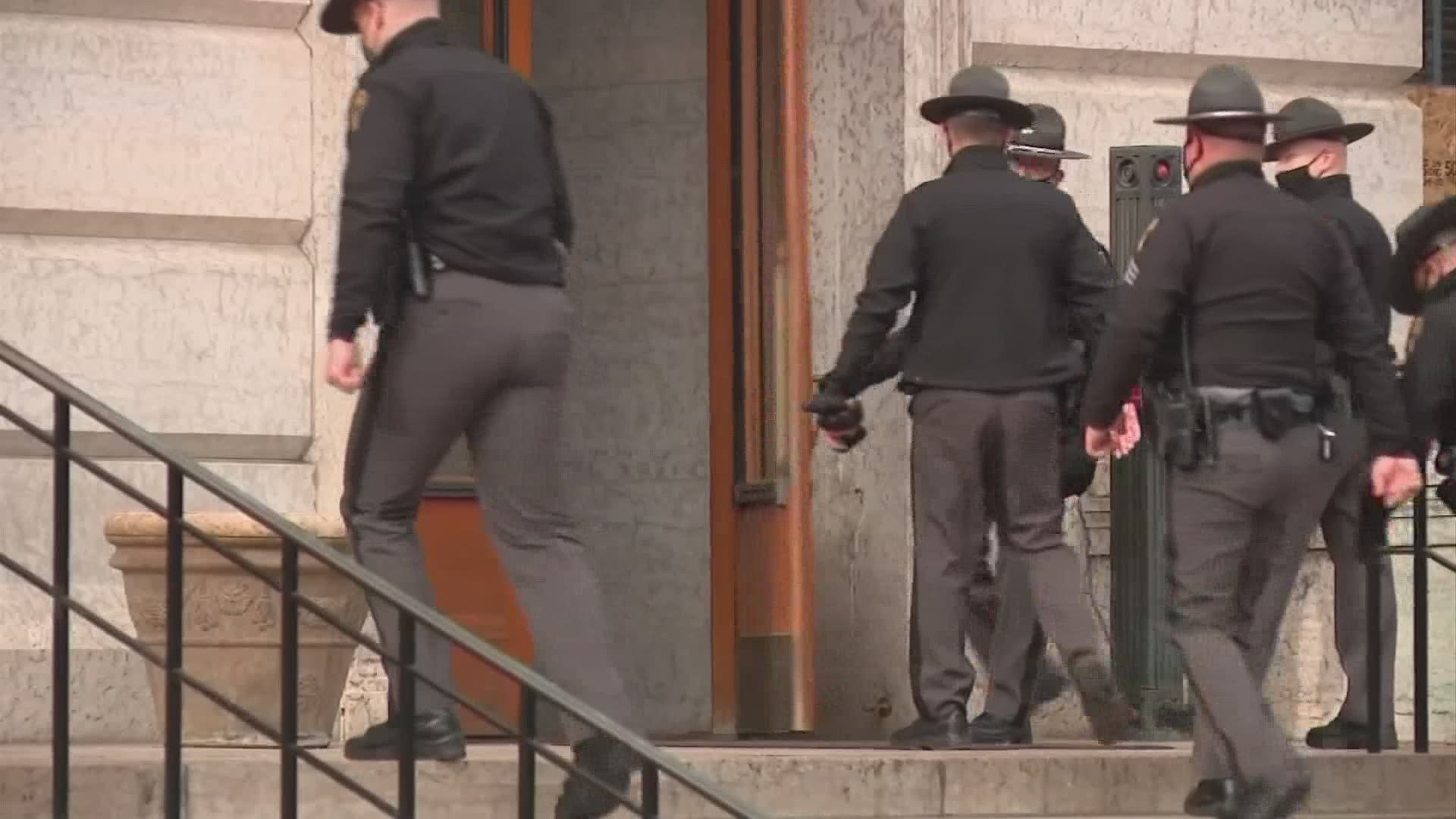 Columbus Mayor Andrew Ginther and several other leaders and officials in the city addressed the potential protests this weekend at the Ohio Statehouse and in downtown Columbus, at a press conference Friday morning.

The Statehouse and other state buildings in downtown Columbus will be closed through Inauguration Day as police officers, National Guard members and state troopers provide security and authorities prepare for possible protests by supporters of President Donald Trump, Gov. Mike DeWine said Thursday.

The city said in a release that city buildings downtown will be closed through Wednesday as well.

This comes after the riot at the U.S. Capitol on Jan. 6.

Ginther and Quinlan advised again Friday that people avoid the planned protests this weekend and up through Inauguration Day.

"In the coming days, we will not allow hate, violence and destruction to be a part of our city," Ginther said.

"It is our responsibility as Americans, elected officials and community leaders to protect the safety of our residents and defend the city we love against those who seek to tear it down," Ginther continued.

"Hate has no place in Columbus or these United States of America," Ginther said.

Quinlan said Friday police will protect people who choose to peacefully decide to exercise their right to express free speech.

Both Quinland and Ginther do not want the violence that happened at the Capitol brought to Columbus.

"Jan. 6 made it very clear that everyone, all responsible police chiefs in this country are put on notice that there are people willing to go above and beyond anything I have ever seen in my career," Quinlan said.

“The sad truth is that there are people in our country who want to turn peaceful protests into an opportunity for violence,” said DeWine, a Republican, at a news briefing Thursday. “These are violent people, and their violence will not be tolerated in Ohio.”

The governor was joined Thursday by Ginther, a Democrat, and leaders of the state’s highway patrol and National Guard forces to announce further restrictions after a violent mob loyal to Trump stormed the U.S. Capitol last week, forcing congressional members to take cover and resulting in the death of five people, including a Capitol Police officer.

At the Friday press conference, U.S. Congresswoman Joyce Beatty (D-Ohio) described her experience Friday at the Capitol riot on Jan. 6

She was barricaded in her office with young staffers who were "frightened, panicked, crying, huddled together on the floor under a wood desk."

She said they could hear a gunshot and glass breaking.

"Today I come to ask us to listen, to protect each other, to stand together because this is no time for the hatred that we saw at the United States Capitol in Washington, D.C.," Beatty pleaded.

DeWine had authorized National Guard members from Jan. 14 to Jan. 21 to conduct training and be prepared in case called upon to police armed protests authorities say are planned at the U.S. Capitol and the Ohio Statehouse leading up to the Inauguration of President-Elect Joe Biden.

More than 1,000 National Guard members in Ohio will be sent to Washington. Inauguration Day is Wednesday, Jan. 20.

But the governor and other state and local officials did not disclose any details about the anticipated size of the protests or how they have determined there will be any.

Many online platforms the groups used to share information have been banned in recent days, and it’s unclear what might happen in coming days.

Regardless, Adj. Gen. John Harris, the head of the Ohio Guard, said the force is prepared to handle whatever comes its way.

“We’re the fifth-largest National Guard in the country, so we have a significant set of capabilities available to us and to the governor,” Harris said during the briefing.

The Statehouse has seen several protests in the past year related to the coronavirus pandemic and concerns over racism and police brutality.

In mid-April, protesters angered by the governor’s coronavirus shutdown orders converged on the Statehouse, pounding on windows and leading the governor to shift a media center for pandemic questions to a windowless area on the first floor.

In late May, people protesting the death of George Floyd smashed 28 Statehouse windows; damaged doors, light poles and flags; and dumped several garbage cans. One person briefly entered an office through a broken window but retreated before troopers within the building could catch him.

In June, the Statehouse was defaced with red handprints and the phrase “hands up, don’t shoot” in protest of police brutality.

No change in Statehouse weapons policy will be made, unlike in Michigan, which banned the open carrying of weapons in its capitol. Ohio already bans weapons in the Statehouse except for law enforcement officers with proper permission.