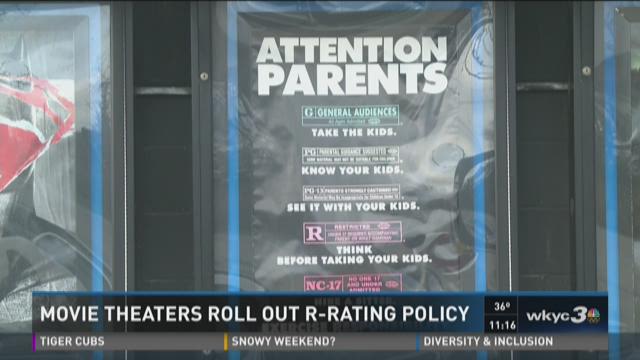 If you want to visit the movies this weekend, there are some little-known policies you may want to become familiar with before you buy your ticket. It could affect your viewing experience and who you take with you.

An R-rating on a movie means children under the age of 17 can get in only with a parent or guardian who is over the age of 21. But some theaters are tightening their rules.

Children under the age of six are not allowed into R-rated movies at Regal Cinemas, even when they're accompanied by an adult. You may think it's because these movies aren't appropriate for someone that age, but it's a policy the theater implemented to benefit the adults.

Regal released this statement to us, saying, “At Regal, it is our job to provide the best movie-going experience for our patrons and want to make sure there are minimal interruptions during R-rated movies. We best achieve this through controlling the number of young children in films with an ‘R’ rating.”

We talked with many people, most of whom think little kids have no business in R-rated movies anyway.

"I don't think that they should see that kind of thing at that age. They wouldn't understand it anyway. So why scar them?" said Nancy Born.

"With the violence in movies today, that's what you're subjecting your child to," said Chuck McIntire who has a young daughter.

Tabitha Polachek told us, "I have girls that are under the age of six and I would never. I can't imagine. It's R-rated for a reason."

This isn't a new policy. It's been in place at Regal for about a year. AMC and Cinemark have implemented a "No 6 After 6" rule, which means those kids can accompany adults to R-rated movies during the day, but not after 6 p.m.