Kirkpatrick is a nationally known nutrition expert, who grew up right here. She's a woman who's spent her lifetime answering the questions that pop into most our heads when we're faced with a mirror. 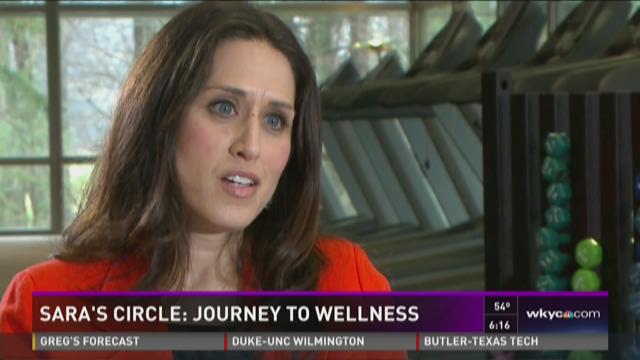 We all have to eat, but for Kristin Kirkpatrick, food is work. Food is science. Food is fuel. But food is still complicated.

"I try really hard to eat well every day, but I also work here, and I have a three-month-old and a three-year-old. So life is busy! And sometimes really challenging," said Kirkpatrick. "My goal is for me and my family, for my husband, for my boys, if I can get four to five colors in everyone throughout the day, then I'm doing something right."

Kirkpatrick is a nationally known nutrition expert, who grew up right here. She's a woman who's spent her lifetime answering the questions that pop into most our heads when we're faced with a mirror.

She contributes to The Dr. Oz Show, and shares her advice through lots of other national outlets. But her current job title says it best: Wellness Manager at the Cleveland Clinic Wellness Institute.

We're starting a new series Thursdays on Channel 3 News at 6 about the women in Northeast Ohio's communities who make things happen. These are women who see the possible, women you'd like to have in your group, women we’re bringing into Sara’s Circle

"Wellness is looking at your entire circle and can you cross off all the boxes and say: I took steps today to help myself live longer and live better," she said.

The Clinic feels like home to Kirkpatrick, whose cardiologist father has worked there for 40 years. It’s also where her own journey to wellness started as a teenager.

“My blood sugar was out of control. I was very overweight, so that prompted them to then send me to endocrinology. It was this whole thing about, 'Now it's time to lose weight,” she said.

She was brave enough to share this photo, of a 17-year-old who saw the world differently.

“Sometimes I say that I always have the fat girl within,” she said. “I'm proud that I was able to get to the point where I am today. A lot of times when I look at this, and I look at how overweight I was, a lot of times, people say, 'How long did it take you to lose the weight?' My answer is usually it took me about ten years. and I'm still figuring out the maintenance part. Still figuring that out.”

“So I often tell women have the courage, be courageous enough to try and change things around for a little bit. See if you can change the norm. And you might be surprised at how great you can feel.”

1. Get rid of anything that lists sugar of any form (including honey, agave or any artificial sweeteners) in the first five ingredients. Bread is the only exception, because it takes sugar to feed yeast during the rising process. Kristin tells her female patients to eat only 100 calories per day of added sugar, the American Heart Association’s guidelines. This will help reset your taste buds.

2. Make sure 90 percent of your diet is real food. Kristin borrows Michael Pollan’s definition for real food, “something that comes from nature, was fed from nature and will eventually rot.” Processed food is not real food. Starting your day with protein is also crucial to avoiding cravings.

3. Eat until you’re no longer hungry and not until you’re full. Think of your hunger like a scale, says Kristin, with 1 being hungry enough to eat your arm, and 10 being unbutton-your-pants stuffed, like on Thanksgiving. You always want to be between a 4 and 7. Late night snacks and other times we tend to eat without being hungry we might be thirsty, or simply bored. If you are craving something, but not truly hungry, she says distract yourself. Often times, the craving will pass in 5 minutes or less.

On what it really takes to lose weight

“I think you have to open your heart to the possibility that not everything will change in your diet, but if you can change certain things that may prompt you to change other big things…I do think it takes courage, I really do. It takes a lot. It takes strength to make changes in your diet, it’s not easy. So if can have that courage and we can say, I want to do this for my health, I don’t want to repeat some of the mistakes I’ve seen other people repeat, and I want to live long, but I also want to live good. That’s really the mindset you have to have in order to make change.”

On where women need to start, mentally

“I think what we need to do, what women need to think about in particular is what can I do today that I can do 20 years from now? That’s really it. When you look at people who have really healthy habits. They’re doing it year after year after year. They’re not thinking about it. They’re not stepping on a scale. They aren’t obsessing over a number. So what is my comfortable point, where I can start making these changes, where they don’t seem like changes anymore?”

“My nonnegotiable is I still like my coffee creamer in my coffee every morning. Is it a good choice? Absolutely not. But it’s the one thing that is not the best food in my diet the majority of the day.”

On where she loves to shop

“I was in Washington D.C. for ten years, and I always wanted to move back to Cleveland. I met a D.C. boy and he was brave enough to come back home with me. I thought where can I take him to really wow him about Cleveland? And I took him to the West Side Market. And he just thought it was the coolest place in the world. West Side Market really kind of shows who Cleveland is, and the type of people that we are, and I sold him on Cleveland at the West Side Market.

On choosing a life partner

“Whomever you partner in life with, that’s going to make a big difference in whether you’re able to maintain your health. Our partners are so influential. My husband is incredible. He’s a marathon runner. I often say I’m trying to reach his level with being able to run and to exercise. I don’t exercise every day. I try to. I don’t, but he’s my motivation for that.”

“[My two sons] are both hilarious, and I feel like I never grasped the huge responsibility it is to raise humans. We don’t think about it that way. [My husband and I] have dogs, and we have goats, and we have all these animals. We thought, well when kids come along, it will just be like everything else. I also felt like I had this incredible pressure because my parents were just amazing in the way they raised me and my brothers. The opportunity they gave us I’ve taken that example and said: How do I turn these two boys into amazing men?”

On her favorite part of the day

“There’s no better part of my day than, when I go pick my three-year-old up and he runs to me. It’s just the best part of my day. And there’s nothing that can match it. It’s like a drug. And you can’t match that feeling.”