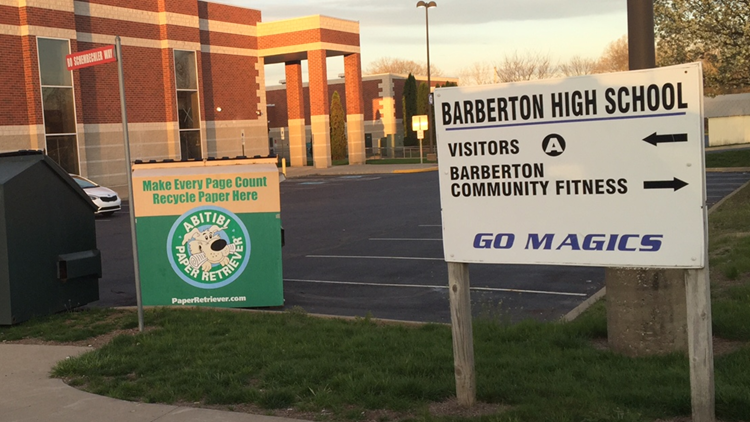 BARBERTON, Ohio — A local school district has responded after some of its student athletes did not stand for the United States national anthem before a game.

In a statement released Saturday afternoon, the Barberton City School District confirmed some players did not stand and that it "supports every student’s right to free speech." Officials cited the U.S. Constitution, Ohio law (forbidding schools from forcing students to perform acts of patriotism like reciting the Pledge of Allegiance), and the 1943 Supreme Court case West Virginia State Board of Education v. Barnette that protected students from being forced to salute the American flag.

"While many people may not share this student’s point of view, as a public school district we are proud of all of our students who are learning important lessons about life that public schools are uniquely suited to teach—that people can hold different beliefs and can still coexist, get along, and even work together toward common goals."

3News later reached out to Barberton Superintendent Jeffrey Ramnytz, who said two members of the high school boys basketball team have declined to stand all season. He stated the district knew of their intentions beforehand, and reaffirmed their right to do so.

"It did not disrupt the game," Ramnytz said. "We have a really good team, great students and a great community."

The decision of some athletes to not stand for the anthem first gained national attention in 2016, when then-San Francisco 49ers quarterback Colin Kaepernick first sat and then knelt during the pregame playing of The Star-Spangled Banner in protest of racism and police brutality in the U.S. Several athletes in the NFL (including multiple Browns players in 2017) and other sports later followed his lead, and a national conversation began about patriotism and racial issued in America.

Barberton schools responded to several outraged community members on the Facebook post with the initial statement, with one comment reading, "The reason [for not standing] is personal to the student. From a district standpoint, we must follow the law."