It is not known at this time what caused the fire. 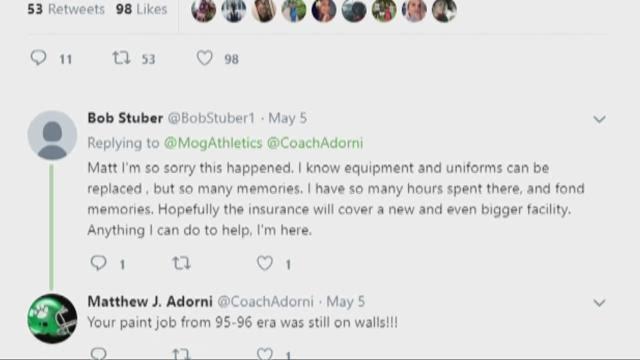 Parents and students said there were coaches' offices, meeting rooms, the player's uniforms and sports equipment inside the field house. They were quite shocked, wondering what could have caused the fire.

Vivian McDonald runs for Mogadore High school's track team. She told Channel 3 she was at track practice at another location when her coach got the call.

"A lot of us have memories in there, so to hear about it being on fire, it was just terrifying,” said Vivian McDonald, student.

One parent told Channel 3 the field house is very special to the Mogadore community because many folks had donated their time and money to build it decades ago.

The roof of the building had collapsed from the strong blaze. School officials say no one was hurt, but the field house was badly damaged in the flames.

Fieldhouse took it on the chin today. Thankfully everyone is safe. Great job Mogadore fire department with help from surrounding departments. pic.twitter.com/0hCR1HnE3V

It is not known at this time what caused the fire. The Athletic Department thanked crews for their help.