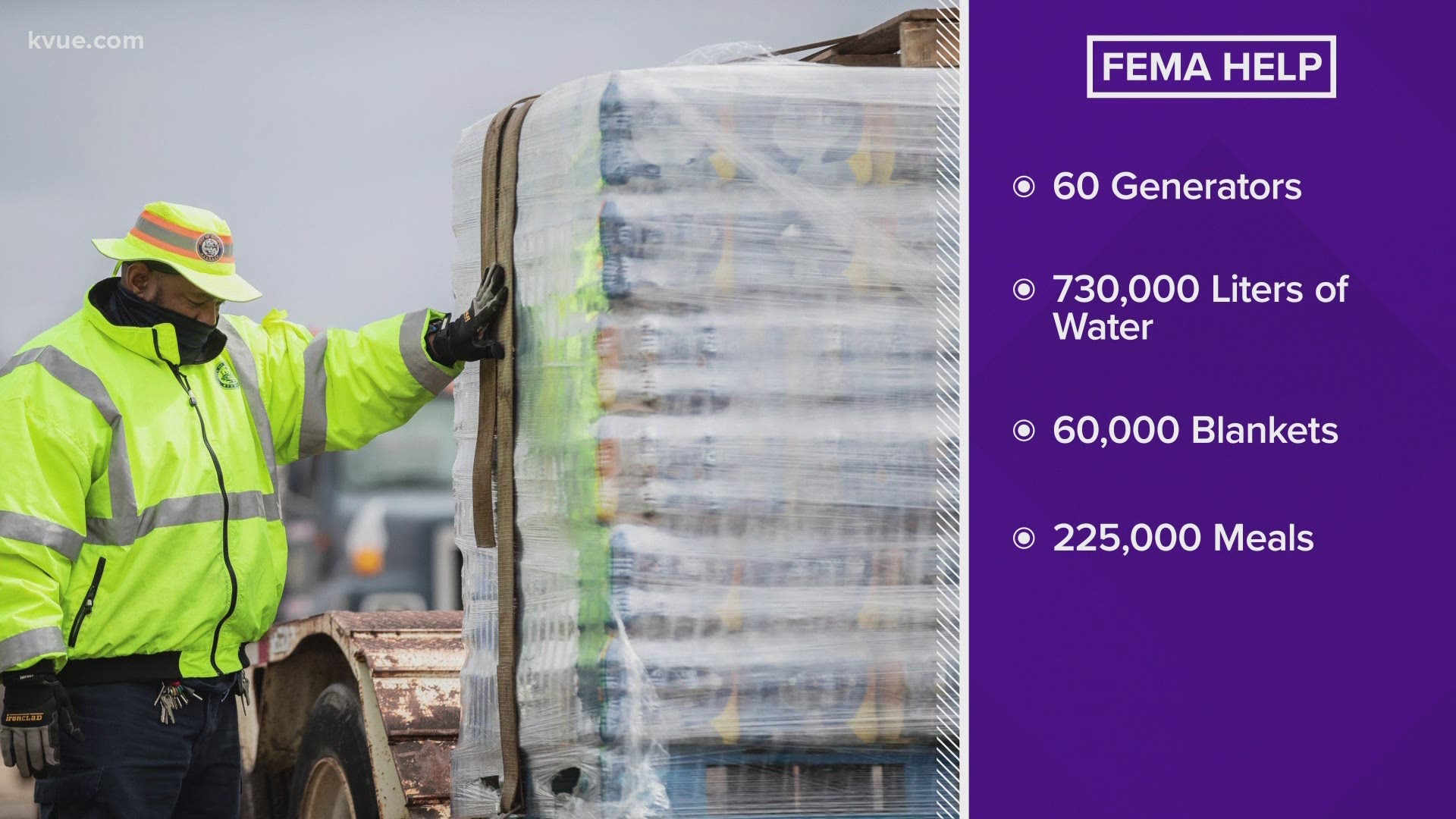 FORT WORTH, Texas — Editor's note: This story originally stated that FEMA sent over 60,000 generators, but the correct amount is over 60.

FEMA sent over 60 generators along with fuel, 729,000 liters of drinking water, 60,000 blankets and 225,000 meals. The Texas Department of Emergency Management will now decide where it will be distributed across a state heavily impacted by power outages, boil water notices and sub-freezing temperatures.

Texas had previously requested assistance on Saturday. The generators provided are to be sent to police, fire stations and hospitals, a FEMA spokesperson said.

CORRECTION: to this tweet.. Texas received "60" generators. I apologize for my typo, which of course changes the numbers significantly. 60 generators is the correct number. @KVUE @KHOU @FEMARegion6 https://t.co/egKDB7OpJe

While the full distribution plans have not been confirmed, hospitals, nursing homes, water treatment plants and communication facilities will be first priority. Some items have already been distributed, like water and blankets.

White House Press Secretary Jen Psaki reported Wednesday the Biden administration is monitoring the situation in Texas in coordination with FEMA, as well as other states affected by the weather.

"FEMA has supplied generators to Texas and is preparing to move diesel into the state to ensure the continued availability of backup power – which of course is a major issue on the ground – to key critical infrastructure, including communications, hospitals and water," Psaki said.

Some of those supplies reached Austin on Friday evening.

Gov. Greg Abbott and the Texas Division of Emergency Management are encouraging Texans to complete the Self Reporting Damage Survey to help the state identify damages across Texas and help emergency management officials gain an understanding of damages that occurred during the recent winter weather. This data is also needed to provide information to FEMA and highlight the need for federal disaster assistance for individuals.

The voluntary survey, available in both English and Spanish, can be accessed by visiting: www.TDEM.texas.gov/warm. Reporting damage to the Texas Division of Emergency Management is a voluntary activity, is not a substitute for reporting damage to an insurance agency and does not guarantee disaster relief assistance.

"President Biden conveyed his support to the people of Texas in this trying time. He reiterated that the federal government will continue to work hand-in-hand with state and local authorities in Texas to bring relief and address the critical needs of the families affected. He also shared his intentions to instruct additional federal agencies to look into any immediate steps that could be taken to support Texans at this time. The president also expressed that his administration was at the ready should the State of Texas or any other impacted region need additional federal disaster support or assistance as severe storms move across the U.S."

It’s not enough but it’s a good start- the first of the water finally arrived tonight in Travis County from @TDEM @fema @RepLloydDoggett pic.twitter.com/HhFyEC9BRL

Texplainer: Why does Texas have its own power grid?