"It means that we are remember the fallen, our children and others who have died for our country and served our country. And its important to never, ever forget their service." 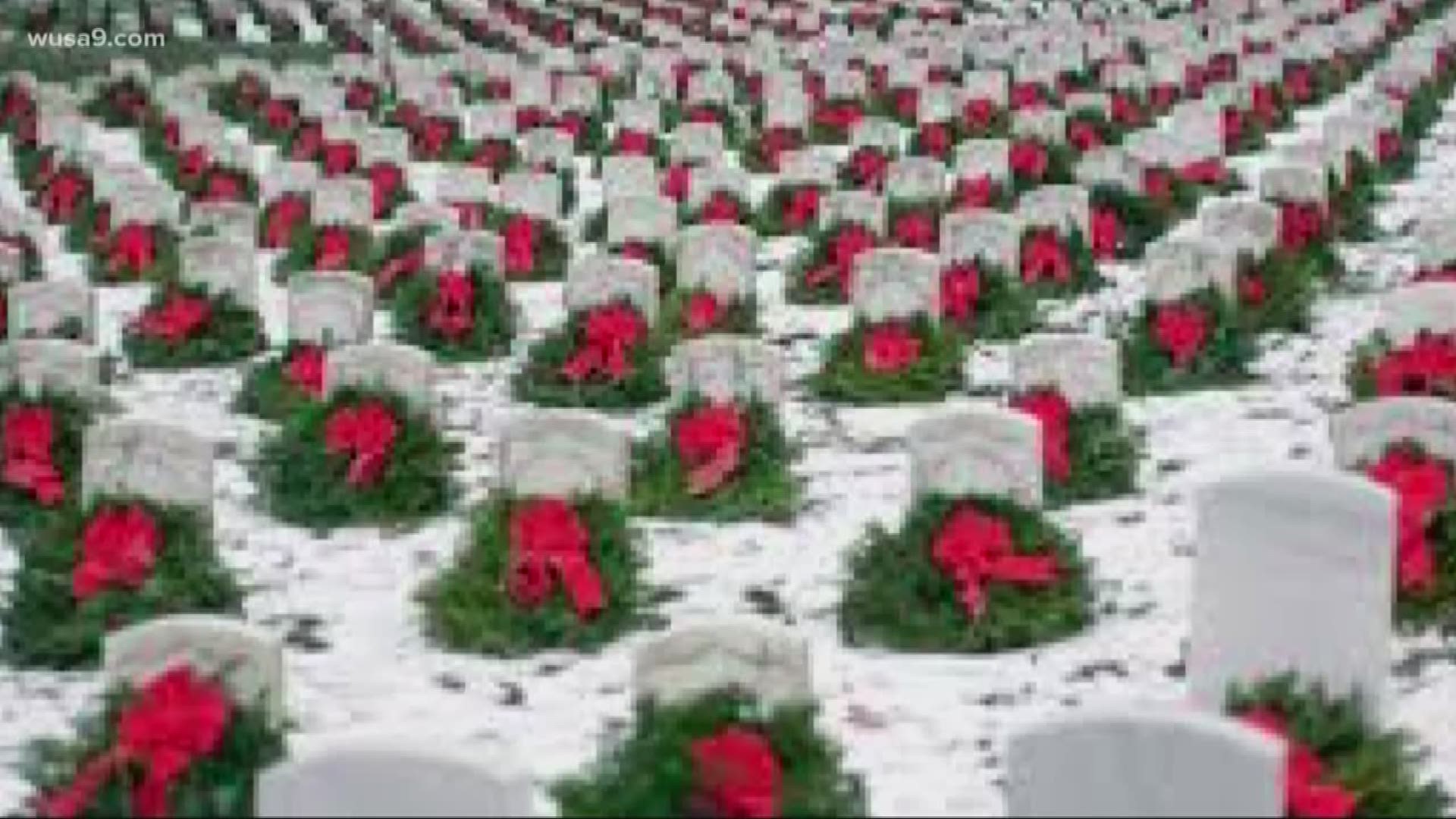 ARLINGTON, Va. -- Thousands of volunteers will descend upon Arlington National Cemetery on Saturday for Wreaths Across America Day to lays wreaths at every grave.

The convoy of trucks, wreaths and volunteers from Maine arrived on Friday and paid tribute at all of the war memorials and at the Pentagon's 911 Memorial.

"We started on Sunday morning to come down here to place wreaths along the way, ending ultimately at Arlington National Cemetery. To honor our fallen, remember and teach people along the way to never forget," said Blaine Silk, a trooper from Maine State Police.

He was part of a five-day caravan that stopped at veterans cemeteries along the way to D.C., laying wreaths.

It's all part of Wreaths Across America, founded by Morrill and Karen Worcester of the Worcester Wreath Company of Harrington, Maine.

Back in 1992, when they had wreaths left over, they brought them to Arlington, and it was so well received they kept doing it year after year.

Honoring those who gave the ultimate sacrifice. #WreathsAcrossAmerica today remembers 184 victims of the 911 terrorist attack at the Pentagon. Tomorrow wreaths will be laid at Arlington National Cemetery. It all started with Morrill and Karen Worcester of Maine @wusa9 5pm pic.twitter.com/Kur7Ot0mLg

"You couldn't help, every time you placed a wreath, not say the names. And every time you said a name it became more and more personal," said Karen Worcester, executive director of Wreaths.

Then, a picture of the wreaths in the show went viral, and the interest exploded, and the non-profit organization was born.

"This American way of life was built on the backs of those families. So it's our responsibility to teach the next generation," said Karen.

A group of Gold Star moms, each remembering a son killed serving, joined the caravan from Maine to D.C.

"To see the people on the street, and the children waving their flags, and saying, 'thank you, thank you thank you!' And I said, 'this is America. Of all the divisiveness going on, we were United. We love America. It's still the greater place to be in the world,'" said Jan Tan.

She lost her son Jesse, a captain in the Marine Corp when he was killed serving in Afghanistan. He was 29.

Wreaths Across America is a national event, as wreaths as laid in more than 1,600 veteran cemeteries across the nation. More than 50,000 volunteers are expected Saturday at Arlington National Cemetery.

"Tomorrow when we have those thousands of volunteers over in Arlington placing wreaths along with us, you're going to see children out there. And I'm so happy when parents bring their children out so they can go and learn about our service men and women," said Gold Star Mom Mona Gun.

"It means that we are remember the fallen, our children and others who have died for our country and served our country. And its important to never, ever forget their service," said Gold Star Mom Becky Christmas.

Volunteers are welcome to take part in Saturday's wreath-laying, it's free and all are welcome.

The opening ceremony takes place at the McClellan Gate at 8:30 a.m.