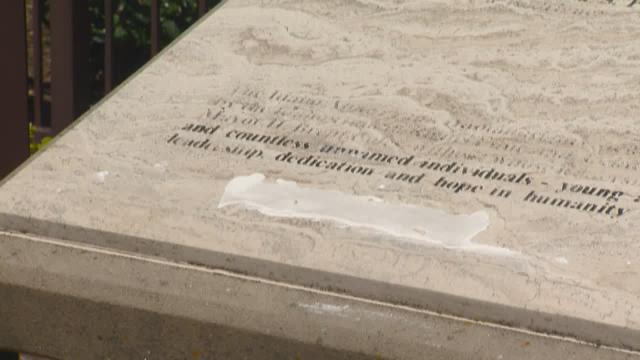 Police say at least three different areas on and near memorial were defaced with racist and anti-Semitic graffiti this week.

Dan Prinzing, the executive director of the Wassmuth Center for Human Rights, finds this devastating, but he says it's not the vandalism that defines this community, it's the reaction the community has had.

"This week the memorial is experiencing something we never had happen before," Prinzing said.

Anti-semitic and racist slurs found on the memorial is something Boise police are not taking lightly.

"I think this is a cowardly, criminal act committed because somebody hates others simply because of who they are, and really it's out of ignorance," said Boise Police Chief Bill Bones.

While police are investigating, the community is stepping up and showing support.

"It's that love of a community that's rallying now to replace, repair and enhance that,” said Prinzing. “This does not go away. Somebody tries to attack but they cannot etch away at the meaning of the memorial."

It will cost an estimated $20,000 to repair the memorial. Dena Gray told KTVB she just couldn't sit back and since she had the money, she couldn't think of a better way to spend it..

"My first feeling was sick at my stomach. I just couldn't see this," Gray said.

She wanted to help after she heard about the vandalism.

"When I finally saw a figure that they said it was going to take, I jumped on it," Gray said. "I had the money to do it and I thought what better place to spend it?" Gray said.

"She said, 'I'm a Christian woman and I'm going to stand up and recognize that this attack on Boise’s Jewish community and the community at large, this is not us,'" Prinzing said.

"You can't sit back and let things like this happen or you're just going to end up in a mess, and I just felt that somebody's got to do something," Gray said.

Gray says she knows the money will be put to good use. She also hopes whoever is responsible for the vandalism is caught and punished.

Bones says they treating this case as a possible hate crime.