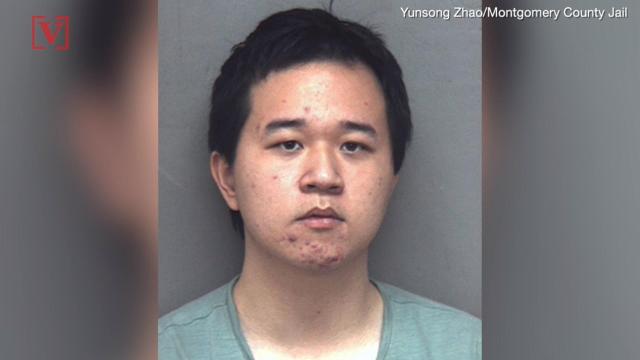 A freshman at Virginia Tech, where a gunman killed 32 people in 2007, has been arrested for possessing an assault rifle, according to local media, He also tried to buy 5,000 rounds of ammunition, police said.

In court documents seen by local TV station WDBJ, police said Yunsong Zhao, a 19-year-old student from China, also was researching bulletproof vests and had bought a former police car and outfitted it with special bumpers.

The arrest was made on Monday after an investigation lasting more than a week.

Credit: Montgomery County Sheriff
Yunsong Zhao, a student at Virginia Tech, has been arrested for possessing an assault rifle and trying to buy 5,000 rounds of ammunition.

Zhao was charged with possessing or transporting an assault firearm while not being a U.S. citizen or while not being lawfully admitted for permanent residence to the U.S., according to the Collegiate Times, a newspaper serving the Virginia Tech community. Zhao was an undecided business major, the paper reported, and is no longer enrolled at the university.

According to the complaint, Virginia Tech police said they were alerted to Zhao after he bought a 30-round rifle magazine on January 22 and Bushmaster XM-15 semiautomatic rifle on January 25.

Under Virginia law, possession or purchase of such firearms is legal, but not to people holding student visas, WDBJ reported, citing a section of the Virginia code.

How the arrest happened

After checking out his Bushmaster XM-15 from the student gun locker at the Public Safety Building on January 26, university police asked Blacksburg Police Department detectives to follow Zhao to a local shooting range.

There, a detective said in the complaint seen by WDBJ, he watched Zhao fire a weapon with a 30-round magazine. According to local TV station WSLS, Zhao is in the Montgomery County, Va., jail with no bail. A preliminary hearing is scheduled for March 1.

More: 'I think about it every day': Arizona man says he sold ammo to Las Vegas mass shooter

“Today, following a lengthy investigation,” Kevin Foust, chief of the Virginia Tech Police Department said in a statement, “VTPD served an arrest warrant on a student for a firearms violation … and took him into custody earlier today without incident.”

In April 2007, a 23-year-old Virginia Tech student, Cho Seung-hui, shot and killed 32 people on campus before taking his own life.

On Tuesday, Virginia Tech officials played down the threat that Zhao may have posed, according to the nearby Roanoke Times. “[A]t no time … did police believe there was any threat to our community, nor is there one now,” said a university statement posted online Tuesday night.

The statement, the paper reported, followed online complaints that the university did not use its alert system to tell students and staff about Zhao’s arrest because there was no danger to warn about.

“Right now, there is no threat to our community. And because there was no threat a VT Alert was not sent Monday,” the statement said.