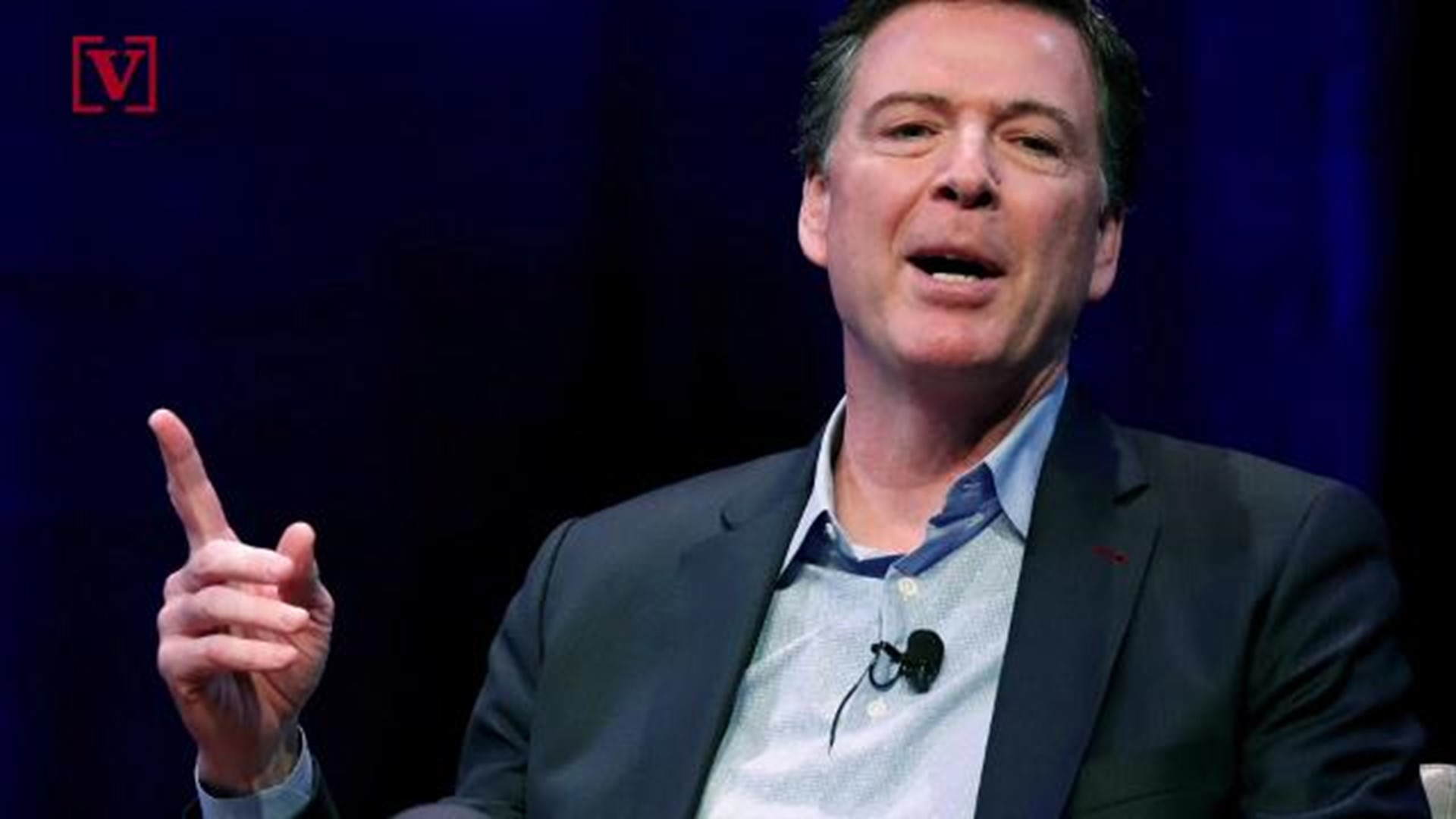 WASHINGTON – Former FBI Director James Comey broke FBI and Justice Department protocol in his handling of the 2016 investigation of Hillary Clinton's email scandal, but Comey was not motivated by political bias when he cleared Clinton of criminal wrongdoing, according to a long-awaited report released Thursday by a watchdog official for the Justice Department.

"While we did not find that these decisions were the result of political bias on Comey’s part, we nevertheless concluded that by departing so clearly and dramatically from FBI and department norms, the decisions negatively impacted the perception of the FBI and the department as fair administrators of justice," Inspector General Michael Horowitz concluded in the report. The 568-page document focused on the FBI's handling of the investigation of Clinton's use of a private email server while she was secretary of state.

Comey wrote on Twitter that he thought the report's conclusions were "reasonable," even though he disagrees with some of them.

I respect the DOJ IG office, which is why I urged them to do this review. The conclusions are reasonable, even though I disagree with some. People of good faith can see an unprecedented situation differently. I pray no Director faces it again. Thanks to IG’s people for hard work.

While Horowitz didn't find political bias by Comey, he did uncover more anti-Trump emails from a pair of FBI officials who were involved in an extramarital affair.

The report says bureau lawyer Lisa Page wrote to counterintelligence agent Peter Strzok in a text message: "(Trump's) not ever going to become president, right?" In response, Strzok, who helped oversee the Clinton email investigation, wrote: "No. No he's not. We'll stop it."

Horowitz acknowledged in December that his inquiry into the Clinton case had unearthed anti-Trump text messages between the two. Horowitz notified special counsel Robert Mueller about the texts because Strzok was on Mueller's team for the separate Russia investigation. Mueller promptly removed Strzok from his staff. Page, who had also been on Mueller's staff, left before the texts became public.

Strzok's attorney, Aitan Goelman, said the investigation "concluded that there is no evidence that the political views of Special Agent Strzok and others in the FBI impacted the handling of the Clinton email investigation."

"As the report notes, Special Agent Strzok in particular was consistently thorough and aggressive, sometimes to the point that put him at odds with senior officials at the Department of Justice," Goelman said. "While pundits and politicians are using this matter to advance their agendas, the truth about Special Agent Strzok’s character and professionalism is found in the fact that every witness asked by the OIG said that Strzok’s work was never influenced by political views."

The report characterized the politically charged text messages as “antithetical to the core values of the FBI.” Still, investigators "did not find documentary or testimonial evidence that improper considerations, including political bias, directly affected the specific investigative actions we reviewed."

The inspector general’s report did not address whether any of its findings would be referred to federal prosecutors for possible criminal action.

However, the findings related to text message exchanges involving Strzok, Page and three other bureau staffers were being passed on to the FBI's Office of Professional Responsibility for possible disciplinary action. Strzok still works at the bureau, but Page left last month.

"We’re going to hold employees accountable for any potential misconduct,” FBI Director Christopher Wray said at an evening briefing. “We’re going to make sure that every FBI employee understands the lessons of this report."

Congress and the White House have been awaiting Horowitz's report, which has taken about 18 months to complete and could affect Mueller’s investigation into Russia's interference in the 2016 election.

President Trump is likely to seize on the report to argue he was right to fire the former FBI director last year. At the time of his firing, Comey had been leading an investigation into Russian meddling in the election.

Rep. Trey Gowdy, chairman of the House Oversight and Government Reform Committee, said he was "alarmed, angered, and deeply disappointed by the Inspector General's finding of numerous failures by DOJ and FBI" in the Clinton inquiry.

"This is not the way normal investigations are run," the South Carolina Republican said.

But Democrats say the report shows Comey's actions helped elect Trump, undercutting the president's accusations that FBI and Justice Department officials were biased against him. Clinton has blamed her election defeat on Comey's public disclosure of a reopening of the email investigation 11 days before the election.

Credit: Jon Elswick, AP
Part of a Nov. 6, 2016, letter from FBI director James Comey to Congress is photographed in Washington, Sunday, Nov. 6, 2016. Comey tells Congress that a review of new Hillary Clinton emails has "not changed our conclusions" from earlier this year that she should not face charges.

What does the report say about Comey?

The report blasts Comey for deviating from DOJ guidelines when he held a news conference July 5, 2016, to announce that there would be no criminal charges brought against Clinton and to accuse her of carelessness in her use of the private email server. Typically, the FBI’s role would be limited to referring its findings to the attorney general. It would then be up to prosecutors to decide whether to bring criminal charges. The Justice Department — not the FBI — would typically make any public announcements about the case.

Horowitz wrote that Comey acted "unilaterally" and outside the scope of his authority when he announced the closing of the Clinton investigation at the news conference.

Separately, Thursday's report rebukes Comey for sending a letter to Congress in late October 2016 telling lawmakers the FBI had reopened its investigation of Clinton. The FBI had found evidence of previously undiscovered emails on the computer of former New York Rep. Anthony Weiner, who was then married to top Clinton aide Huma Abedin.

The FBI found no evidence to charge Clinton, and Comey announced — just two days before the election — that the case was closed.

Comey has said he was prompted to take extraordinary action in the Clinton case, in part because he believed then-Attorney General Loretta Lynch showed poor judgment when she met privately in June 2016 with former President Bill Clinton when their planes were parked on the tarmac in Phoenix.

Lynch rebuffed calls for her recusal from the investigation, choosing instead to assert that she would accept the recommendation of career prosecutors.

Horowitz concluded in his report that there was no evidence  Lynch and Bill Clinton spoke about Hillary Clinton's case. The report criticized Lynch for other failings, however.

Horowitz referred to a near-blackout in communications between Comey and Lynch when Comey abruptly reopened the Clinton investigation.

The report found that top DOJ and FBI officials engaged in cascading errors in judgment compounded by an “extraordinary” lack of communication that risked the institutions’ “reputation for political independence."

Yet for all the individual missteps and institutional breakdowns, Horowitz concluded that they found no evidence of political bias in the investigative decisions that he reviewed.

How could this affect the Russia investigation?

Comey is a witness in the Russia investigation being led by special counsel Mueller. Mueller is looking into whether Trump's firing of Comey in May 2017 was an effort by the president to obstruct justice by derailing the FBI's inquiry into possible collusion between the Trump campaign and the Kremlin.

The inspector general's report could have seriously undercut Comey’s credibility as a witness in the Mueller investigation if it had found that he lied about his actions in the Clinton case or that his actions were politically motivated. It's less damaging to Comey that the report found that his main offense was violating procedural norms.

Still, as Horowitz concluded, Comey's actions "negatively impacted the perception of the FBI and the department as fair administrators of justice."

1 / 14
Jack Gruber, USA TODAY
James Comey, Director of the Federal Bureau of Investigation, left, and James Clapper, Director of the National Intelligence, during hearing regarding Assessment of Russian Activities and Intentions in Recent U.S. Elections before the Senate Intelligence Committee on Jan 10, 2017 in Washington.

How is the Trump administration reacting?

The White House said Thursday that Trump had been briefed on the report.

“It reaffirms the president’s suspicions about Comey’s conduct and political bias among some members of the FBI," spokeswoman Sanders said.

Trump has repeatedly attacked the FBI and Justice Department, which he has denounced as "corrupt."

Attorney General Jeff Sessions on Thursday acknowledged "significant errors by the senior leadership of the Department of Justice and the FBI," which he blamed on the previous administration.

"Accordingly, this report must be seen as an opportunity for the FBI — long considered the world’s premier investigative agency — and all of us at the department to learn from past mistakes," Sessions said. "The department is not above criticism, and it is accountable to the chief executive, Congress, and most importantly, the American people."

Sessions said FBI Director Christopher Wray, who took over the top spot at the bureau last August, has assembled a “new leadership team — one in which the American people can have confidence.”

The inspector general's report comes just two months after the office issued a related review, concluding that former FBI Deputy Director Andrew McCabe misled investigators about his role in providing information to the media about a separate FBI investigation of the Clinton Foundation before the 2016 election.

In McCabe's case, the inspector general determined that the former FBI official "lacked candor" when he was questioned multiple times under oath about sharing information about the Clinton Foundation inquiry with a Wall Street Journal reporter in October 2016.

The matter has been referred to federal prosecutors to determine whether McCabe should face criminal charges. McCabe's attorney, Michael Bromwich, has called the referral "unjustified."

How is Congress reacting?

Even before the report was released Thursday, Republican Reps. Andy Biggs of Arizona and Ron DeSantis and Matt Gaetz of Florida sent a letter to Horowitz expressing concern that it may have been watered-down from the original version during an internal review process. They asked Horowitz to provide them with his original drafts.

House Judiciary Committee Chairman Bob Goodlatte, R-Va., said the report "confirms that former Secretary of State Hillary Clinton received special treatment from the Obama Justice Department during its investigation of her use of a private email server."

"The Justice Department and FBI didn’t treat her like any other criminal suspect and didn’t follow standard investigative procedures," Goodlatte said

"They should not have revealed that they had reopened the case just days before the election," Cummings and Nadler said. "These actions violate longstanding guidelines designed to protect citizens from unfair attacks and avoid influencing elections."