Baby dugong, separated from mother, gets survival training from humans

Marine experts in Thailand are trying to nurture Marium in hopes of returning her to the wild. 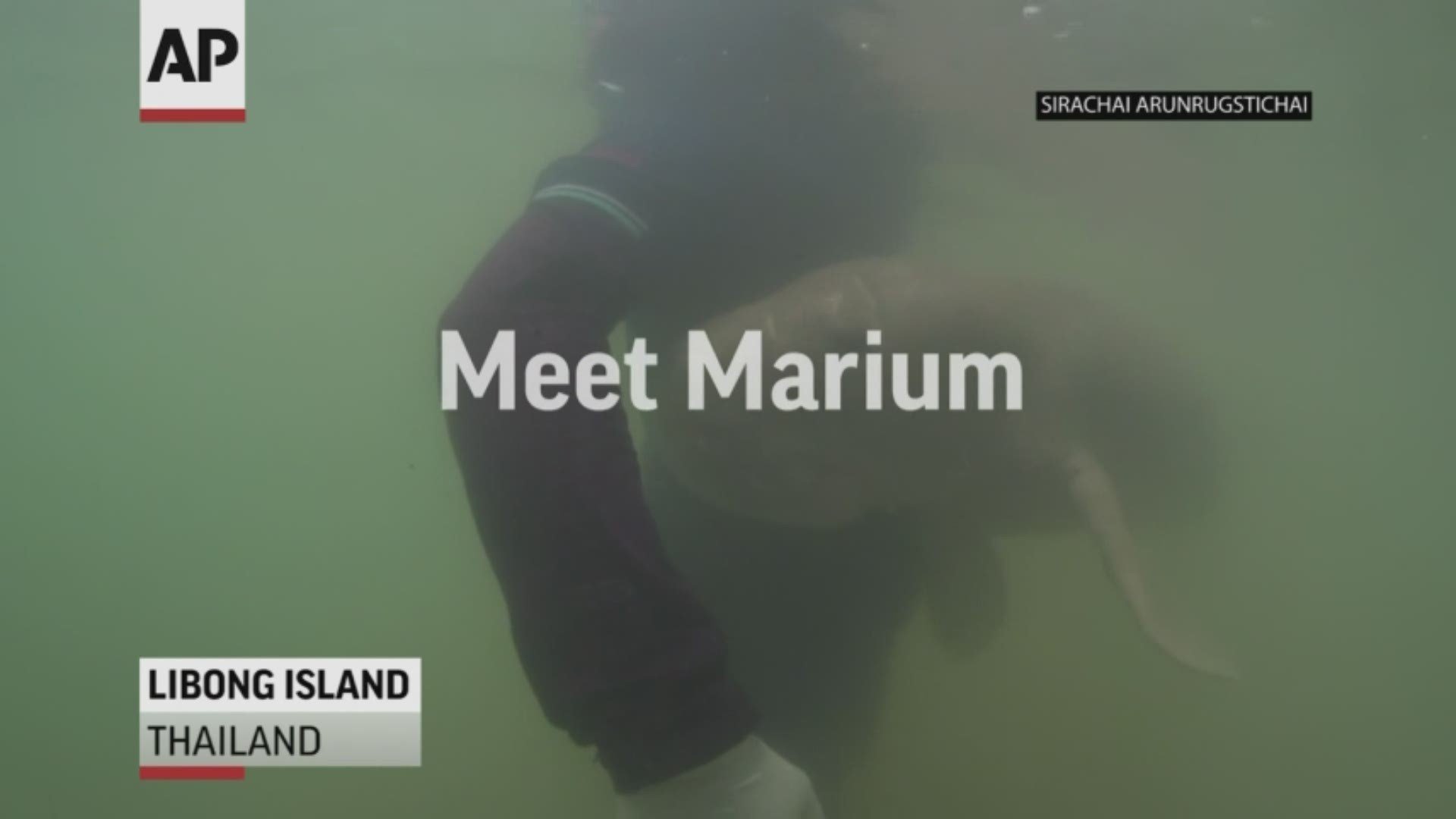 BANGKOK, Thailand — A baby dugong, a large ocean mammal, that has developed an attachment to humans after being separated from its mother and getting lost off southern Thailand is being nurtured by marine experts in hopes that it can one day fend for itself.

The estimated 5-month-old female dugong named Marium has become an internet hit in Thailand after images of marine biologists embracing and feeding it with milk and sea grass spread across social media.

The dugong is a species of marine mammal similar to the American manatee and can grow to about 3.4 meters in length. Its conservation status is listed as vulnerable by the International Union for the Conservation of Nature.

Marium was spotted alone near a beach on Ko Poda island in Krabi province in April. Officials later tried to release it into a dugong habitat off the coast of another island but it swam away.

Veterinarians and volunteers set out each day in canoes to locate Marium near the dugong habitat off Ko Libong island. It does not swim with the herd and usually comes straight to them, then follows them into shallower water, where it is fed milk and sea grass, similar to her natural diet, for up to 15 times a day while also receiving health checks.

Credit: AP
In this Thursday, May 23, 2019, photo, Marium, an estimated 5-month-old female dugong baby separated from her mother, swims under a boat hull near the Libong island, in Trang province, southern Thailand. (Sirachai Arunrugstichai via AP)

Marium's caretakers believe it has formed a bond with humans but is also drawn to the shape of the underside of canoes, perhaps seeing it as a mother substitute.

"She's attached and tries to swim and cling to the boat as if it was her mother and when we are swimming she would come and tuck under our arms. It's almost like the way she would tuck under her mother," said Nantarika Chansue, director of the Aquatic Animal Research Center of Chulalongkorn University's Faculty of Veterinarian Science, who advises Marium's caretakers.

"So I think it's not only humans but anything that looks like another dugong that she would be attached to," Nantarika said.

Marium has attained fame on social media, and images of it bonding with its human guardians have been widely published by Thai media. It also attracts crowds on Libong island, where its feeding is often watched by scores of people crowding the seashore.

Credit: AP
In this Thursday, May 23, 2019, photo, officials of the Department of Marine and Coastal Resources feed milk to Marium, a baby dugong separated from her mother, on Libong island, Trang province, southern Thailand. (Sirachai Arunrugstichai via AP)

Veterinarians say they need to continue looking after Marium for at least another year until it can be weaned off of bottled milk, after which they hope it will be able to look after herself without their help.

Nantarika said dugongs typically stop feeding on milk at around 18 months and usually spend around eight years under their mothers' care. She said Marium would have to be trained later to detach herself from humans but, at this point, the emphasis should be on her survival.