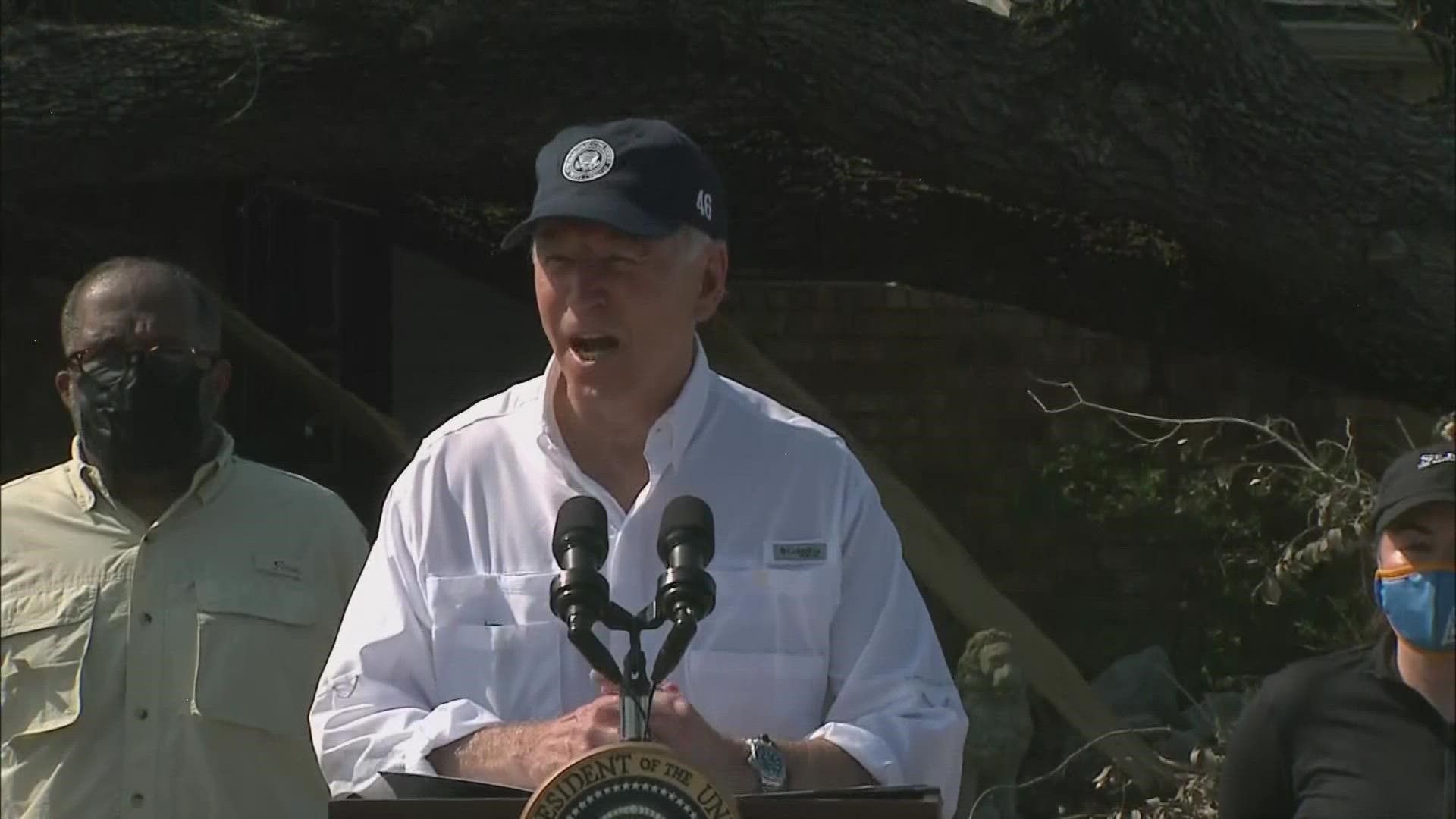 Biden pledged robust federal assistance to get people back on their feet and said the government already had distributed $100 million directly to individuals in the state in $500 checks to give them a first slice of critical help. Many people, he said, don't know what help is available because they can't get cellphone service.

Residents welcomed Biden's presence, one of them drawing a sign with his last name and a heart for the dot on the “i.” They laughed and posed for selfies.

More formally, Biden met with state and local officials in LaPlace, a community between the Mississippi River and Lake Pontchartrain that suffered major wind and water damage and was left with sheared-off roofs and flooded homes.

“I promise we’re going to have your back,” Biden said.

He also planned a flyover tour of pummeled areas including Lafitte, Grand Isle, Port Fourchon and Lafourche Parish, where Parish President Archie Chaisson said 25% of the homes in his community of 100,000 were gone or had catastrophic damage.

The devastation was clear even as Air Force One approached New Orleans, with uprooted trees and blue tarps covering shredded houses coming into view. The road to LaPlace exhibited power-line wood poles jutting from the ground at odd angles.

Trips to natural disaster scenes have long been a feature of U.S. presidencies, moments to demonstrate compassion and show the public leadership during a crisis. They are also opportunities to hit pause, however temporarily, from the political sniping that often dominates Washington.

In shirtsleeves and boots, Biden was welcomed at the airport by Louisiana Gov. John Bel Edwards, a Democrat. Several Republicans, including Sen. Bill Cassidy and Rep. Steve Scalise, the House Republican whip, were also on hand.

Edwards said Biden has "been a tremendous partner,” adding that he intended to keep asking for help until the president says no.

In the aftermath of Ida, Biden is focusing anew on the threat posed by climate change and the prospect that disaster zone visits may become a more regular feature of the presidency. The storm has killed at 13 people in Louisiana, Mississippi and Alabama, and at least 48 in the Northeastern U.S.

The president has pointed to that destruction to call for greater public resolve to confront climate change. His $1 trillion infrastructure legislation intends to ensure that vital networks connecting cities and states and the country as a whole can withstand the flooding, whirlwinds and damage caused by increasingly dangerous weather.

At Friday’s briefing with local officials, Biden insisted the infrastructure bill and an even more expansive measure later on would more effectively prepare the country.

“It seems to me we can save a whole lot of money, a whole lot of pain for our constituents, if we build back, rebuild it back in a better way,” Biden said. “I realize I’m selling as I’m talking.”

Sen. Cassidy tweeted later that in his conversation with Biden, "we spoke about the need for resiliency. We agreed putting power lines beneath the ground would have avoided all of this. The infrastructure bill has billions for grid resiliency.”

Past presidents have been defined in part by how they handled such crises.

Seemingly casually, Donald Trump lobbed paper towels to people in Puerto Rico after a hurricane, generating scorn from critics but little damage to his political standing. Barack Obama hugged New Jersey Republican Gov. Chris Christie in 2012 after Superstorm Sandy, a brief respite from partisan tensions that had threatened the economy. George W. Bush fell out of public favor after a poor and unprepared response to Hurricane Katrina, which swamped New Orleans in 2005.

Scientists say climate change increases the frequency of extreme weather events — such as large tropical storms, and the droughts and heatwaves that create conditions for vast wildfires. U.S. weather officials recently reported that July 2021 was the hottest month recorded in 142 years of record-keeping.

Biden's nearly eight-month-old presidency has been shaped in part by perpetual crises. The president went to Texas in February after a cold winter storm caused the state's power grid to fail, and he has closely monitored the wildfires in Western states.

Besides natural disasters, the president has had to contend with a multitude of other challenges. He is searching for ways to rescue the 100-200 Americans stuck in Afghanistan after the longest war in U.S. history ended a matter of days ago. He is also confronting the delta variant of the coronavirus that has plunged the country into an autumn of uncertainty only months after he declared independence from the disease at a July 4 celebration on the White House lawn.

Ida was the fifth-most powerful storm to strike the U.S. when it hit Louisiana on Sunday with maximum winds of 150 mph (240 kph), likely causing tens of billions of dollars in flood, wind and other damage, including to the electrical grid. The storm's remnants dropped devastating rainfall across parts of Maryland, Pennsylvania, New York and New Jersey on Wednesday, causing significant disruption to major cities.