"We still have a town. We still have the residents of Paradise… they're just not at their residences right now. So, we find them." 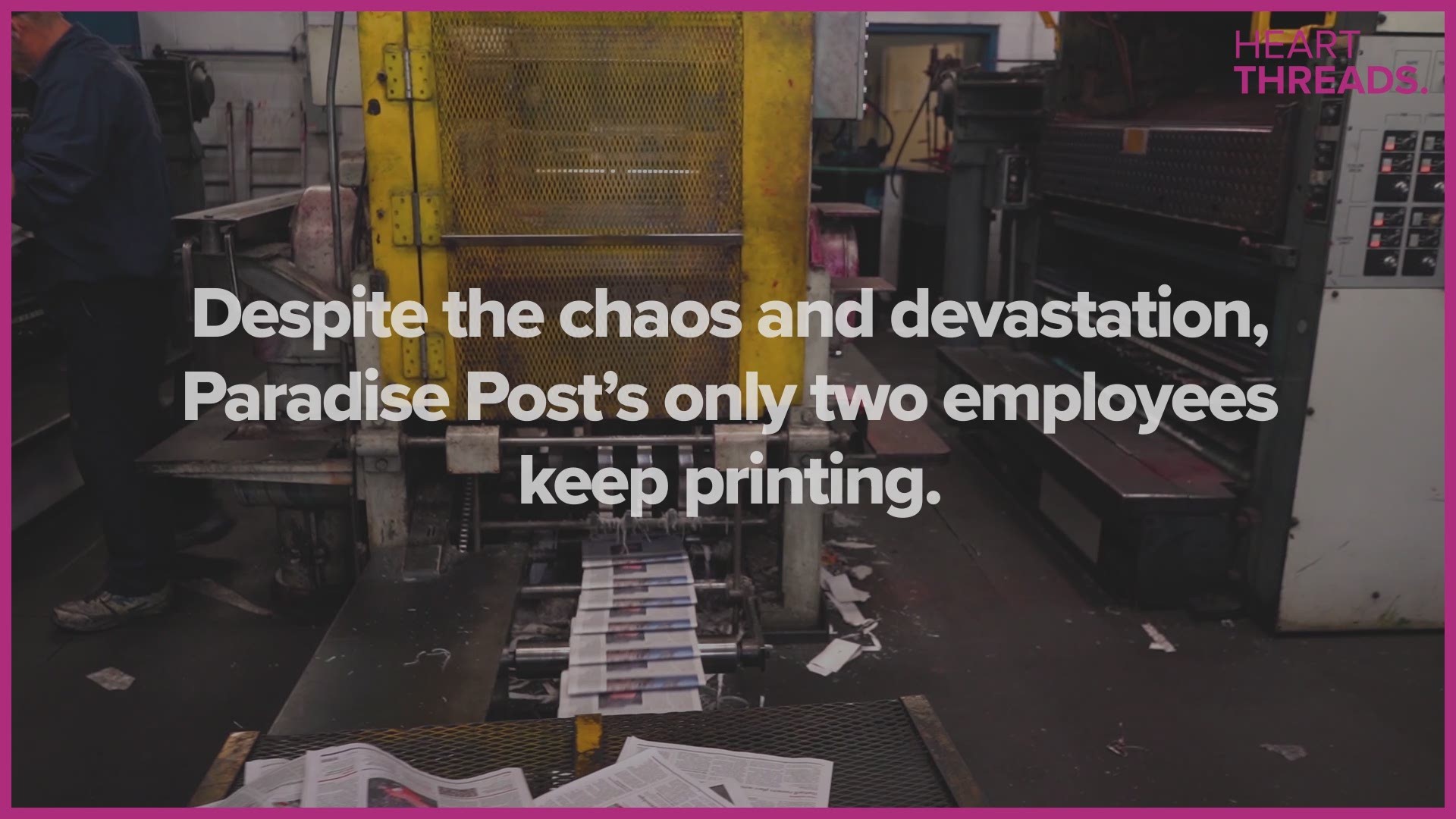 CHICO, Calif. — Two weeks ago, Paradise was every meaning of its name to its 26,000 residing locals.

The tight-knit community relied on two means of communication to get their local news, word of mouth and The Paradise Post.

Since 1947, the newspaper has reported the small town’s latest happenings.

Editor-in-chief Rick Silva knows the importance of local journalism. Born and raised in Butte County, Rick was employed by the Post as a sports reporter after graduating from Chico State. He credits his time reporting athletics as what got him ingrained in Paradise and connected to the residents.

“When you spend as much time in a community as I have, you get to like the community you’re in,” said Rick.

For over eight years, Rick served Paradise by reporting what locals wanted to hear, like transferring coverage from adult softball to little league baseball. Eventually, he was promoted to editor.

Today, he is one of the Post’s two-staff team. His leadership over the newspaper is in direct correlation with the town’s demeanor.

“One of the things I’ve always thought about Paradise is it’s a can-do town,” said Rick. “They want something built, they build it.”

So it’s no surprise that as the world turned its attention towards the tiny town destroyed by California’s most devastating wildfire – there was no question whether The Paradise Post would continue to print.

To Rick, it was more important than ever to continue reporting the news. Unlike the national media that descended upon the area, Rick knew what the people of Paradise wanted and needed to hear as they fled for their lives.

“You have to remember, these are people’s lives,” said Rick. “The reason it was so important to print was we have customers who are displaced. And they’re not just our customers, they’re our neighbors and they’re our friends… this has been their newspaper. Our voice is their voice.”

Just like at the time of the newspaper’s birth year, print journalism is especially relevant now as internet has been non-existent following the fire and many lost their phones while escaping the flames.

But Paradise was evacuated and reduced to rubble and ashes. With no town left, how would The Paradise Post reach the hands of its readers?

The Post’s staff decided to deliver the news. Since the fire, they have been hand-delivering the newspaper to Paradise locals at evacuee shelters, hotels, trailers and wherever their readers may be residing.

“I know there’s the slogan, a newspaper without a town. Well we have a town! It’s just spread out everywhere. We just have to find out where they are, right? We still have a town. We still have the residents of Paradise… they’re just not at their residences right now. So, we find them,” said Rick.

The healing has just begun for the people of Paradise. And as the community rises from the ashes, Rick and The Paradise Post will continue to bring them the news.

We’ve joined forces with HeartThreads to make sure wildfire survivors, their pets and communities, get the help they need. HeartThreads storytellers are focused on positive and uplifting stories, shining a light on those heroes, first responders and helpers in the wake of these devastating disasters.

You can help by share these stories using hashtag #CaliforniaGiving and donating whatever you can to GlobalGiving’s Fire Relief Fund. Click below, or simply text “GIVE 36594" to 80100 to donate $10. Thank you for joining us and sharing the best of yourself with survivors of this terrible devastation.