Death toll of powerful earthquake in Haiti soars to 1,297

Rescuers are racing to find survivors amid the rubble ahead of a potential deluge from an approaching tropical storm. 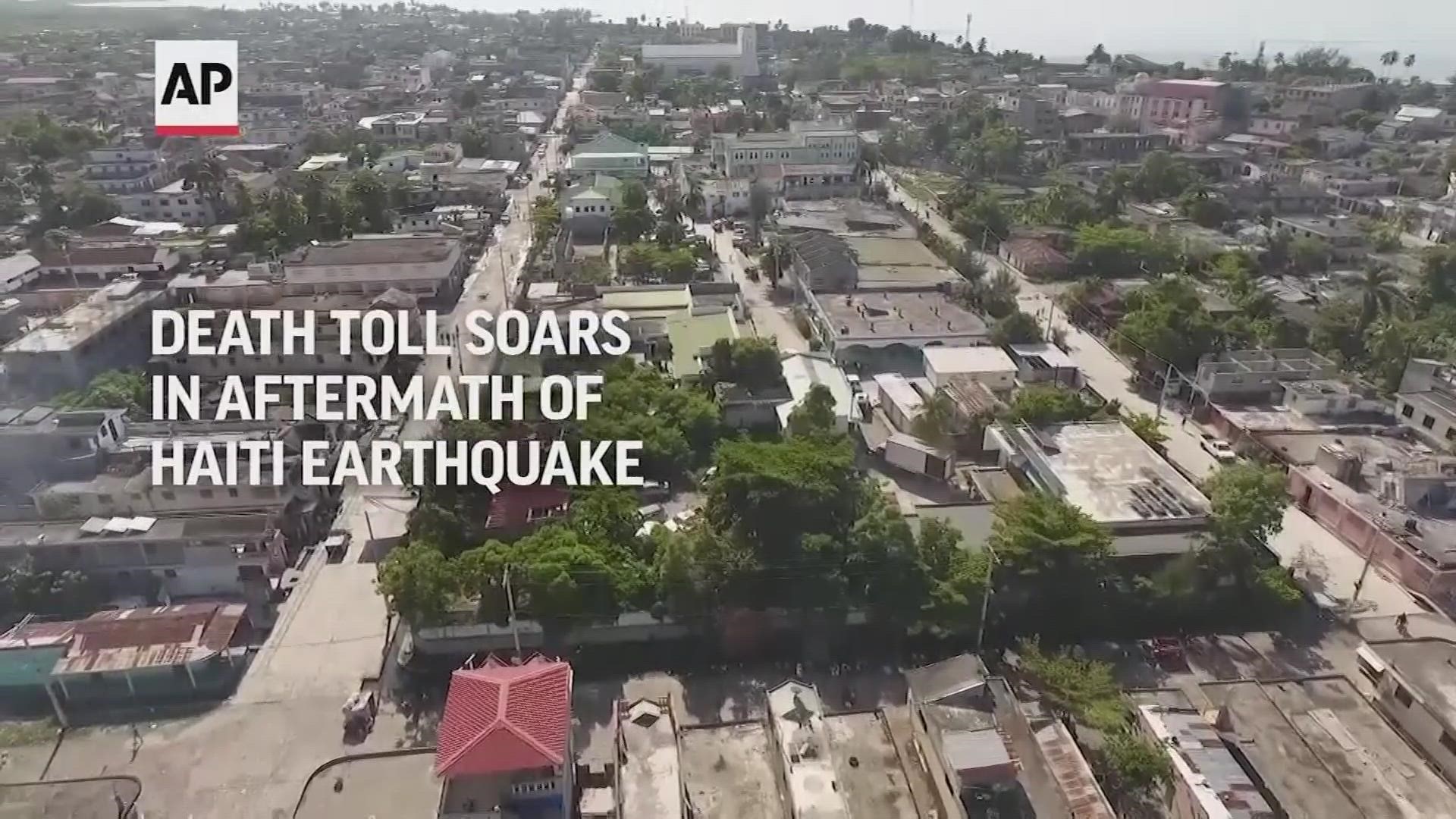 LES CAYES, Haiti — The death toll from a magnitude 7.2 earthquake in Haiti soared to at least 1,297 Sunday as rescuers raced to find survivors amid the rubble ahead of a potential deluge from an approaching tropical storm.

Saturday's earthquake also left at least 2,800 people injured in the Caribbean nation, with thousands more displaced from their destroyed or damaged homes. Survivors in some areas were forced to shelter in streets or soccer fields with their few salvaged belongings while overloaded hospitals scrambled to help those who were injured.

Yet the devastation could soon worsen with the coming of Tropical Depression Grace, which is predicted to reach Haiti on Monday night. The U.S. National Hurricane Center demoted the tropical storm to a depression Sunday, but forecasters warned that regardless, Grace still posed a threat to bring heavy rain, flooding and landslides.

The earthquake struck the southwestern part of the hemisphere’s poorest nation, almost razing some towns and triggering landslides that hampered rescue efforts in a country already grappling with the coronavirus pandemic, a presidential assassination and a wave of gang violence.

The epicenter was about 125 kilometers (78 miles) west of the capital of Port-au-Prince, the U.S. Geological Survey said, and aftershocks continued to jolt the area Sunday.

In the badly damaged coastal town of Les Cayes, some families salvaged their few belongings and spent the night at an open-air football pitch. On Sunday morning, people lined up to buy what little was available: bananas, avocados and water at a local street market.

Some in the town praised God for surviving the earthquake, and many went to the city's cathedral, which appeared outwardly undamaged even if the priests' residence was destroyed.

“We only have Jesus now," said Johanne Dorcely, 58, whose house was destroyed. “If it wasn’t for Jesus, I wouldn’t be able to be here today."

Prime Minister Ariel Henry declared a one-month state of emergency for the whole country and said he was rushing aid to areas where towns were destroyed and hospitals overwhelmed. A former senator rented a private airplane to move injured people from Les Cayes to Port-au-Prince for medical assistance.

“The most important thing is to recover as many survivors as possible under the rubble,” said Henry. “We have learned that the local hospitals, in particular that of Les Cayes, are overwhelmed with wounded, fractured people.”

Hospitals were overwhelmed at a moment when Haiti has been struggling with the pandemic and a lack of resources to deal with it. The country of 11 million people received its first batch of U.S.-donated coronavirus vaccines only last month via a United Nations program for low-income countries.

Medical workers from across the region were scrambling to help as hospitals in Les Cayes started running out of space to perform surgeries.

“Basically, they need everything,” said Dr. Inobert Pierre, a pediatrician with the nonprofit Health Equity International, which oversees the St. Boniface Hospital, about two hours from Les Cayes.

“Many of the patients have open wounds and they have been exposed to not-so-clean elements,” added Pierre, who visited two hospitals in Les Cayes — one with some 200 patients, the other with around 90. “We anticipate a lot of infections.”

Pierre’s medical team was taking some patients to St. Boniface Hospital to undergo surgery, but with just two ambulances, they could transport just four patients at a time.

Small planes from a private firm and the Florida-based missionary service Agape Flights landed at the Port-Au-Prince airport Sunday carrying about a half dozen injured earthquake victims from the Les Cayes area. Young men with bandages and a woman were hoisted on stretchers to waiting Haitian Red Cross ambulances.

Silvestre Plaza Rico, who was supervising one of the volunteer flights, said rescue planes had made several airlifts of about a half dozen injured victims each on Saturday. “There were many, many, many, from different towns,” Plaza Rico said.

The earthquake also struck just over a month after President Jovenel Moïse was shot to death in his home, sending the country into political chaos. His widow, Martine Moïse, who was seriously wounded in the attack, posted a message on Twitter calling for unity among Haitians: “Let’s put our shoulders together to bring solidarity.”

As he boarded a plane bound for Les Cayes, Henry said he wanted “structured solidarity” to ensure the response was coordinated to avoid the confusion that followed the devastating 2010 earthquake, when aid was slow to reach residents after.

Power announced Sunday that USAID was sending a search and rescue team from Virginia at the request of Haiti's government. The 65-person team will bring specialized tools and medical supplies to assist with the disaster response, Power said on Twitter.

Working with USAID, the U.S. Coast Guard said a helicopter was transporting medical personnel from the Haitian capital to the quake zone and evacuating the injured back to Port-au-Prince. Lt. Commander Jason Nieman, a spokesman, said another helicopter was being sent from the Bahamas, along with other aircraft and ships.

Already on the scene were several members of Cuba's 253-member health care mission to Haiti, and the socialist nation's state media showed photos of them giving first aid to victims injured by the quake.

The North Carolina-based aid group Samaritan’s Purse announced Sunday it would airlift 13 disaster response specialists and 31 tons of emergency supplies to Haiti. Those include shelter materials and water filtration units.

The U.N. Office for the Coordination of Humanitarian Affairs in a statement said Haiti's southern peninsula is a “hotspot for gang-related violence,” where humanitarian workers have been repeatedly attacked, including a Doctors Without Borders emergency health center that was targeted in June. The agency said the area has been “virtually unreachable” over the past two months because of road blocks and security concerns.

“All of these factors combined will create significant logistics challenges in reaching the most affected areas,” according to the agency, which added that displacements “has created ripe conditions for a spike in COVID-19 infections.”

Haiti, where many live in tenuous circumstances, is vulnerable to earthquakes and hurricanes. A magnitude 5.9 earthquake in 2018 killed more than a dozen people.

The magnitude 7.0 quake of 2010 hit closer to densely populated Port-au-Prince and caused widespread destruction. Haiti's government put the death toll at more than 300,000, while a report commissioned by the U.S. government placed it between 46,000 and 85,000.

Pope Francis on Sunday expressed his closeness to the people of Haiti, including prayers for the victims and encouragement for survivors. The pope called for the solidarity of the international community “to help alleviate the consequences of the tragedy.”