Saturday marked the first full day of a truce that ended the fourth Israel-Hamas war in just over a decade. 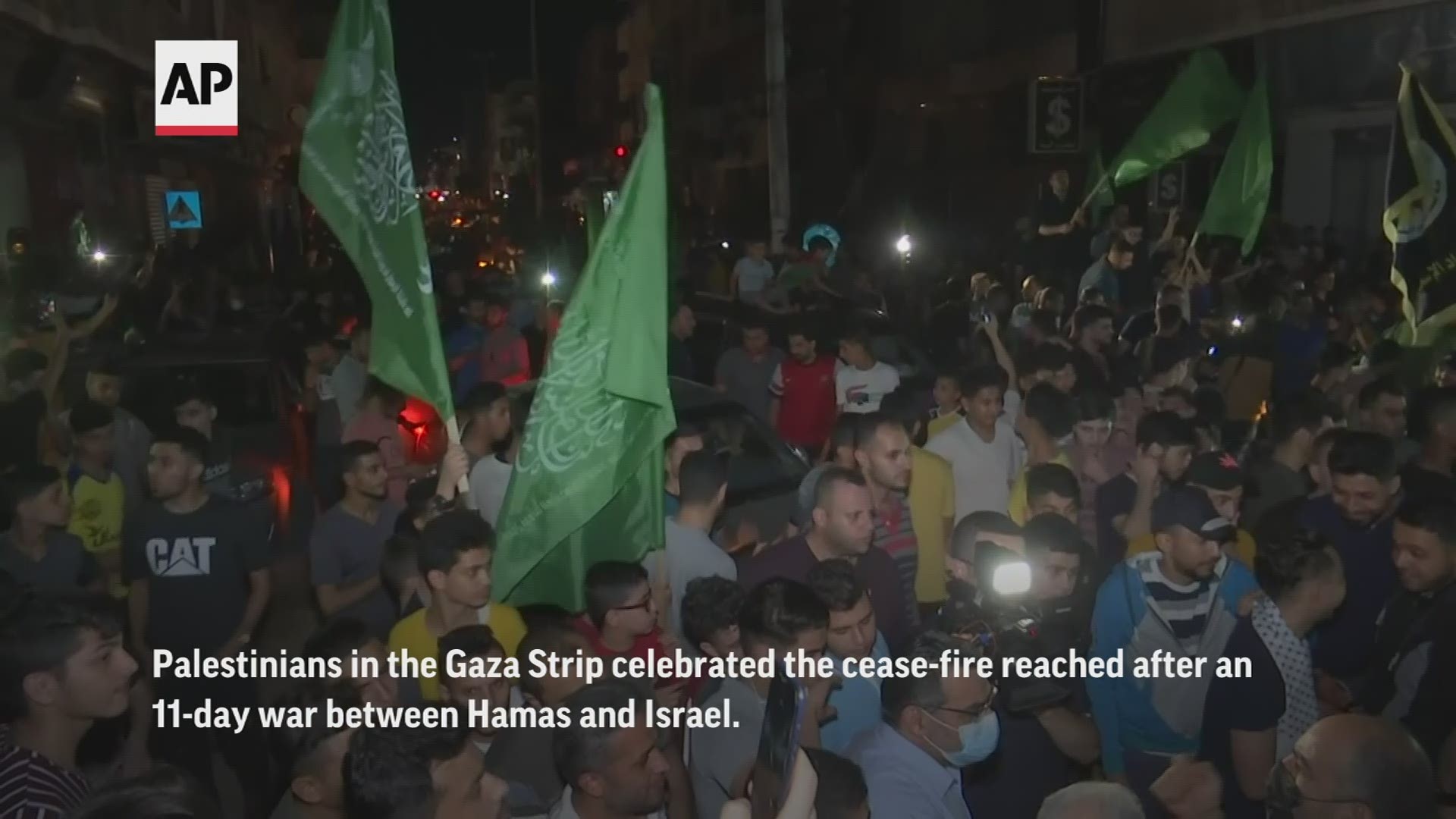 Egyptian mediators held talks Saturday to firm up an Israel-Hamas cease-fire as Palestinians in the Hamas-ruled Gaza Strip began to assess the damage from 11 days of intense Israeli bombardment. A 130-truck convoy carrying urgently needed aid was headed to Gaza.

Saturday marked the first full day of a truce that ended the fourth Israel-Hamas war in just over a decade. In the fighting, Israel unleashed hundreds of airstrikes against militant targets in Gaza, while Hamas and other militants fired more than 4,000 rockets toward Israel. More than 250 people were killed, the vast majority of them Palestinians.

"We really didn't expect this amount of damage," said Ashour Subeih, who sells baby clothes. "We thought the strike was a bit further from us. But as you can see not an area of the shop is intact." Having been in business for one year, Subeih estimated his losses were double what he has made so far.

Both Israel and Hamas have claimed victory. There was a widespread expectation that the cease-fire would stick for now, but that another round of fighting at some point seems inevitable. Underlying issues remain unresolved, including an Israeli-Egyptian border blockade, now in its 14th year, that is choking Gaza's more than 2 million residents and a refusal by the Islamic militant Hamas to disarm.

The fighting began May 10, when Hamas militants in Gaza fired long-range rockets toward Jerusalem. The barrage came after days of clashes between Palestinian protesters and Israeli police at the Al-Aqsa Mosque compound. Heavy-handed police tactics at the compound and the threatened eviction of dozens of Palestinian families by Jewish settlers had inflamed tensions.

The war has further sidelined Hamas' main political rival, the internationally backed Palestinian Authority, which oversees autonomous enclaves in the Israeli-occupied West Bank. It appeared that Hamas increasingly positioned itself as a defender of Jerusalem in Palestinian public opinion.

On Friday, hours after the cease-fire took effect, thousands of Palestinians in the Al-Aqsa compound chanted against Palestinian President Mahmoud Abbas and his self-rule government. "Dogs of the Palestinian Authority, out, out," they shouted, and "The people want the president to leave."

It was an unprecedented display of anger against Abbas. The conflict also brought to the surface deep frustration among Palestinians, whether in the occupied West Bank, Gaza or within Israel, over the status quo, with the Israeli-Palestinian peace process all but abandoned for years.

Despite his weakened status, Abbas will be the point of contact for any renewed U.S. diplomacy, since Israel and the West, including the United States, consider Hamas a terrorist organization.

U.S. Secretary of State Antony Blinken is to meet with Abbas and Israeli leaders when he visits in the coming week. Abbas is expected to raise demands that any Gaza reconstruction plans go through the Palestinian Authority to avoid strengthening Hamas.

Meanwhile, two teams of Egyptian mediators are in Israel and the Palestinian territories to continue talks on firming up a cease-fire deal — and securing a long-term calm, an Egyptian diplomat said Saturday.

The diplomat said discussions include implementing agreed-on measures in Gaza and Jerusalem, including ways to prevent practices that led to the latest fighting. The official did not elaborate. He was apparently referring to violence at the Al-Aqsa Mosque and the planned eviction of Palestinian families from the Sheikh Jarrah neighborhood in east Jerusalem.

The diplomat spoke on condition of anonymity to discuss behind-the-scenes deliberations.

Separately, Egypt said it would send a 130-truck convoy carrying humanitarian aid and medical supplies to Gaza. The convoy is expected to enter Gaza on Saturday.

The bombardment struck a blow to the already decrepit infrastructure in the small coastal territory, home to more than 2 million Palestinians. It flattened high-rises and houses, tore up roads and wrecked water systems. At least 30 health facilities were damaged, forcing a halt to coronavirus testing in the territory.

The Gaza Health Ministry says at least 243 Palestinians were killed, including 66 children, with 1,910 people wounded. It does not differentiate between fighters and civilians. Twelve people were killed in Israel, all but one of them civilians, including a 5-year-old boy and 16-year-old girl.

Israel has accused Hamas and the smaller militant group of Islamic Jihad of hiding the actual number of fighters killed in the war. Prime Minister Netanyahu said Friday that more than 200 militants were killed, including 25 senior commanders.

Islamic Jihad on Saturday gave a first account of deaths within its ranks, saying that 19 of its commanders and fighters were killed, including the head of the rocket unit in northern Gaza.