The blast occurred after police acting on a tip found tons of commercial-grade fireworks at a South Los Angeles home. 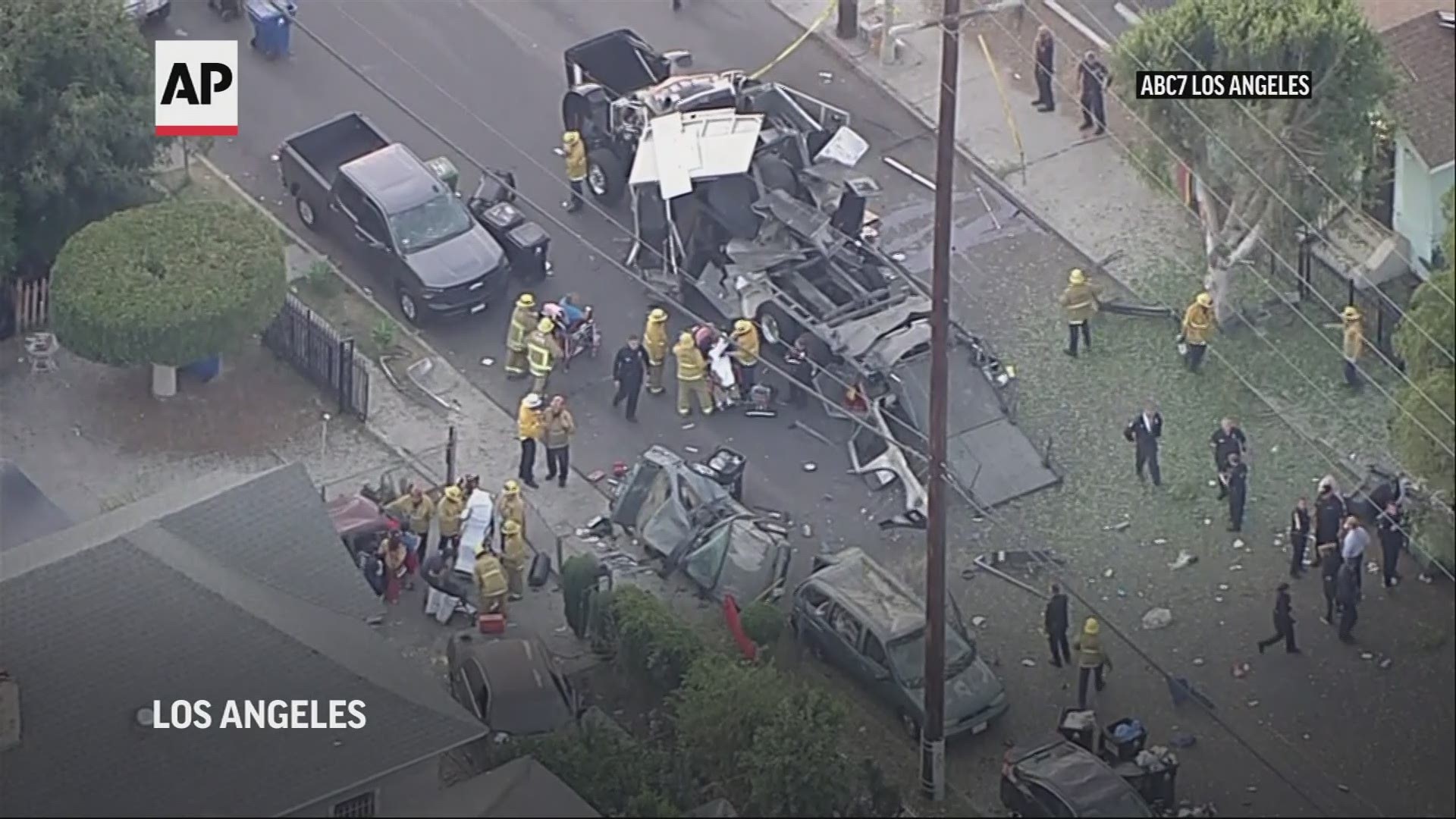 LOS ANGELES — A cache of homemade fireworks exploded as it was being destroyed by a bomb squad, flipping and damaging cars, smashing windows in homes and injuring 17 people including police officers, authorities said.

It could take days to determine why the material exploded inside an iron containment vessel on a tractor-trailer Wednesday night, tearing the rig apart in what was supposed to be a safe operation to handle explosives that were too unstable to remove from a South Los Angeles neighborhood where tons of illegal fireworks were discovered.

“Clearly, protocols were followed and pursued. But something happened in that containment vessel that should not have happened and we don’t know why,” Police Chief Michel Moore said. “But we intend to find out why.”

Homes, cars and a laundromat had windows shattered and one car had its side plowed in and was knocked on its side by the force of the blast, which was heard two blocks away.

Six civilians, ranging from 51 to 85 years old, were taken to the hospital, three with minor and three with moderate injuries, and one person was examined at the scene but wasn’t transported, fire officials said.

News reports showed several women and men on gurneys being taken to ambulances.

Fireworks are illegal to sell or possess in Los Angeles and in unincorporated areas of the county but “every year, we see the devastation and destruction” from them, Terazas said.

Authorities said the blast illustrated the dangers of underground pyrotechnic sales. In March, a massive fireworks explosion at a home in Ontario, east of Los Angeles, left two people dead and caused at least $3.2 million in damage.

The explosion came after police had spent the day disposing of some 3,000 to 5,000 pounds of commercial-grade fireworks that were found in the home following an early-morning tip. Police found some them on a patio in cartons stacked 8 to 10 feet high, Moore said.

A resident, Arturo Cejas, 27, was arrested on suspicion of possessing a destructive device but he also may face charges of child endangerment because his 10-year-old brother was in the home, Moore said.

It wasn't immediately known whether Cejas had an attorney who could speak on his behalf.

The bomb squad was called because the large volume of explosives at the home posed an “imminent and real danger" to the community, Moore said.

The fireworks cartons were marked “Made in China." The police chief said they were bought out of state in order to sell them in the neighborhood for use on the Fourth of July.

Moore said three box trucks and a 53-foot trailer were brought in to load up the fireworks and move them to a safe location. However, “improvised explosives" also were found that were too dangerous to move, the chief said.

He described them as 40 home-made devices the size of Coca-Cola cans with simple fuses and 200 smaller but similar devices.

The material was taken to a “total containment vehicle,” Moore said. The multi-ton semi-tractor trailer rig has a spherical iron chamber that is designed to safely detonate explosives.

Moore said less than 10 pounds of material was placed in the chamber, far less than its safety rating.

“This vessel should have been able to dispose of that material,” he said but instead there was a “total, catastrophic failure of that containment vehicle."

As a safety measure, police had knocked on doors before the blast to evacuate homes on both sides of the street where the truck was parked. But firefighters later found people in some of the homes, Terrazas said.

Despite shattered windows, Terrazas said the explosion seemed to have caused mainly superficial damage to homes and gas and water lines were intact.

Moore said a response team consisting of members from around the country would be arriving in town to examine the site and walk through it for an investigation that could take several days. The chief also said the blast may have thrown debris and possibly dangerous material some distance.

People who spot something suspicious in their yards shouldn't touch it but should call police, he said.