Dana Vann spent six days working on White House decorations for Christmas. She said being chosen for the work was like winning the lottery. 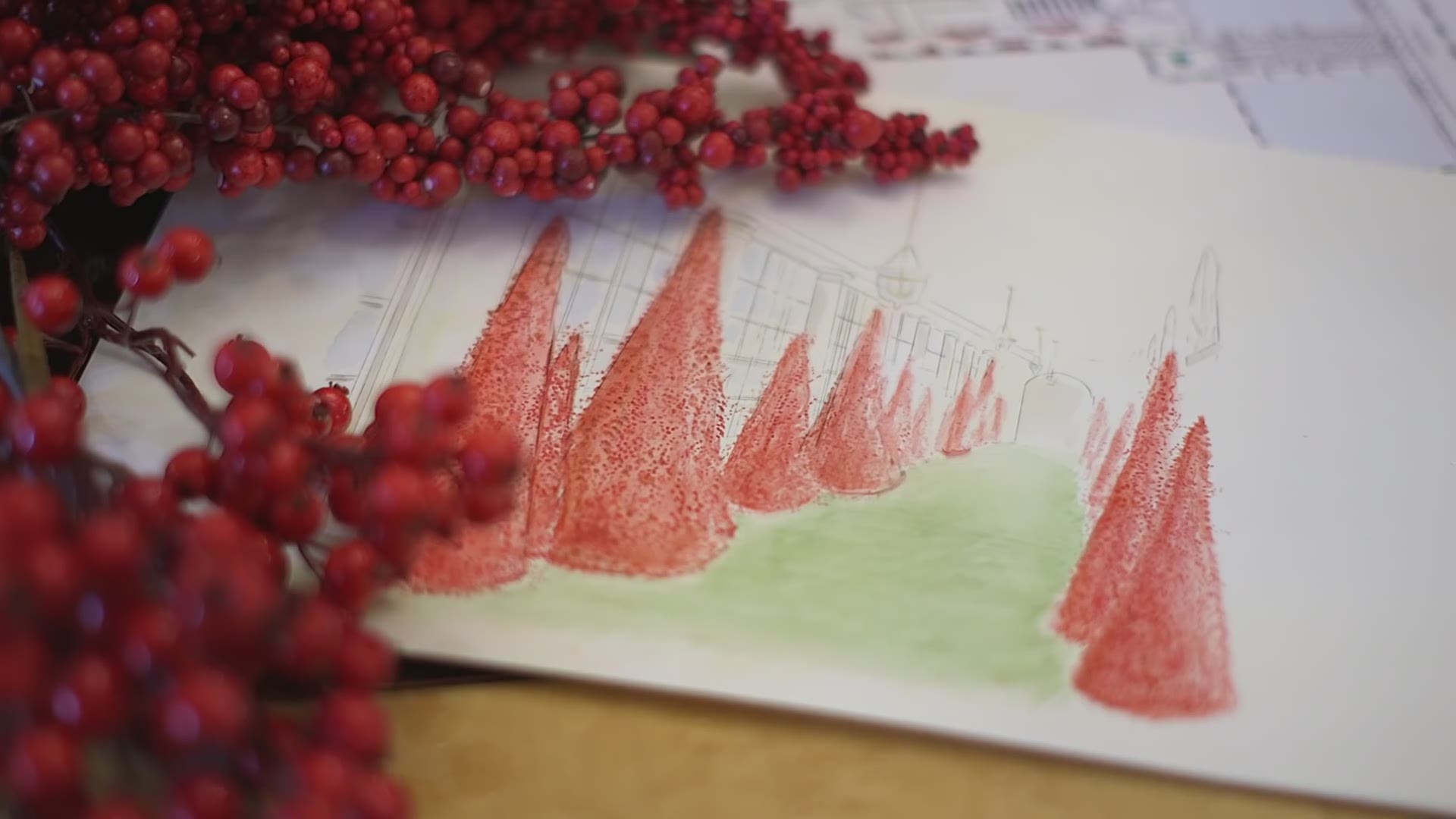 Usually, at least in the past six years, Dana Vann’s trips to Washington, D.C., are whirlwind, one-day deals.

So, when the Gold Star Mother and, since 2012, a lead coordinator for Greater Lafayette’s Honor Flight – taking WWII, Korean and Vietnam veterans on 22 there-and-back trips to D.C. from the Purdue Airport – got an email that she’d be spending six days, three on each side of Thanksgiving, working on the Christmas decorations for the White House?

“I felt like I won the lottery,” Vann said.

While there, Vann was part of the crews that assembled, among other things, the crimson trees that lined the East Colonnade and were part of a motif first lady Melania Trump chose to honor America’s heritage. (“Everybody has a different taste,” Melania Trump said Wednesday during a town hall at Liberty University, as social media and late-night comedians blew up over the sight.)

Vann, who spent three days on that part of the White House decorations, said she didn’t get the criticism. Instead, she was focused on a week she summed up as “an incredible honor.”

Question: How did you get invited to work on the White House Christmas décor?

Dana Vann: I applied to be a White House volunteer to decorate the White House in August. There were over 7,000 applications received, and they selected about 120 to work the three days before Thanksgiving, and about the same to work Friday, Saturday and Sunday after Thanksgiving. I was chosen for both, as were about 40 others.

Q: Tell me about your time at the White House. How long did it take, and what were your chores?

Vann: Our days started at 6 a.m. daily and ended around 5 p.m. The first 2½ days were spent off-site prepping the Styrofoam that would be transformed into 40 red berry trees, ranging from 3 feet to 9 feet. Then we separated over 2,500 stems of artificial berries into small sprigs, as well as individual berries. We loaded the trees and delivered to the White House on Wednesday.

The last three days were spent attaching the berries individually with floral pins. Many other volunteers sorted and assembled other decorations. I was surprised at just how much they reuse decorations from years past. By Saturday, it was evident my “Berry Crew” needed help, and others came to our rescue. We completed the clean-up at 4:45 p.m., knowing the first lady would return at 6 p.m. to tour the decorations.

Q: What were your thoughts when you first saw and heard about the red trees in the White House?

Vann: The red trees are awesome with five different types of berries.

Q: The social media reaction hasn’t exactly been kind. What have you thought about the critiques offered since the decorations were revealed?

Vann: I would say to the critics, unless you have seen them, don’t criticize. Many volunteers spent hundreds of hours on the trees, and they are beautiful. The theme was “American Treasures” and the decor was all red, white and blue. So, the red berries were the perfect choice.

Q: The days you were there, did you ever stop and just ask: Am I really in the White House doing this?

Vann: While we were there, our breakfast and lunch were prepared by the White House chefs. Delicious food, including Thomas Jefferson’s delicious cauliflower macaroni and cheese. During lunch breaks I spent lots of time just admiring the State Dining Room. We were provided with a guided tour. After that, we were able to wander a bit and see the other rooms being decorated. After a couple days, I was totally comfortable there, though I continued to take it all in. No photos were allowed at this time.

I was also allowed to participate in the decorating of the White House Gold Star Tree. I put a cardinal on the tree in memory of my son, Senior Airman John P. Morton Jr. (who died in 2002 during duty in Italy). There were seven Gold Star family members on the decorating team.

I think my favorite room was the library. The combination of all the historical books and the plaid Christmas ribbon with the ornaments from all the states. There are 52 live trees this year, with the large one adorned with banners from all the states and territories. It took the crew who strung the lights several days just to wrap each branch with lights. No wires to show.

Q: Were you able to meet or spend time with first lady Melania Trump?

Vann: We all received an invitation from Melania to a reception on Monday. That is when we were allowed to take photos. I was in the front row when she spoke and thanked the volunteers. That is the point when it became real. I am in the White House. So much history and where so many world leaders have walked. And, the first lady was so elegant and appreciative.

Q: This is going to be on HGTV, right? Are you having a watch party?

Vann: For a close look at our group, watch the White House Christmas on HGTV on Sunday, Dec. 9, at 6 p.m. Unfortunately, I won’t be around to watch it. After 10 days at home, I leave for Maine on Dec. 6 to go on the Wreaths Across America convoy to Arlington National Cemetery on another nine-day trip. We will go through all the New England states, stopping at schools for assemblies, veterans homes and other military organizations. We remember, honor and teach.

Q: You’re busy in town, too. How are things coming for Wreaths Across America here?

Vann: Though I go on the convoy, I am the location coordinator for the Indiana Veterans Home Cemetery in West Lafayette. Thanks to our community, funds were raised to place a wreath on every headstone again this year. Come out on Dec. 15 at noon to lay a wreath and remember a veteran.

Q: After all that, do you have enough left in you to decorate at your house?

Vann: Before leaving, I put up my patriotic Christmas tree and returned home and went right to work putting up two more trees. We love Christmas at my house. I will say after seeing all the elegant decorations at the White House, I may need to update mine.