Authorities say the suspect asked to be excused from his class Friday morning then returned with two handguns. 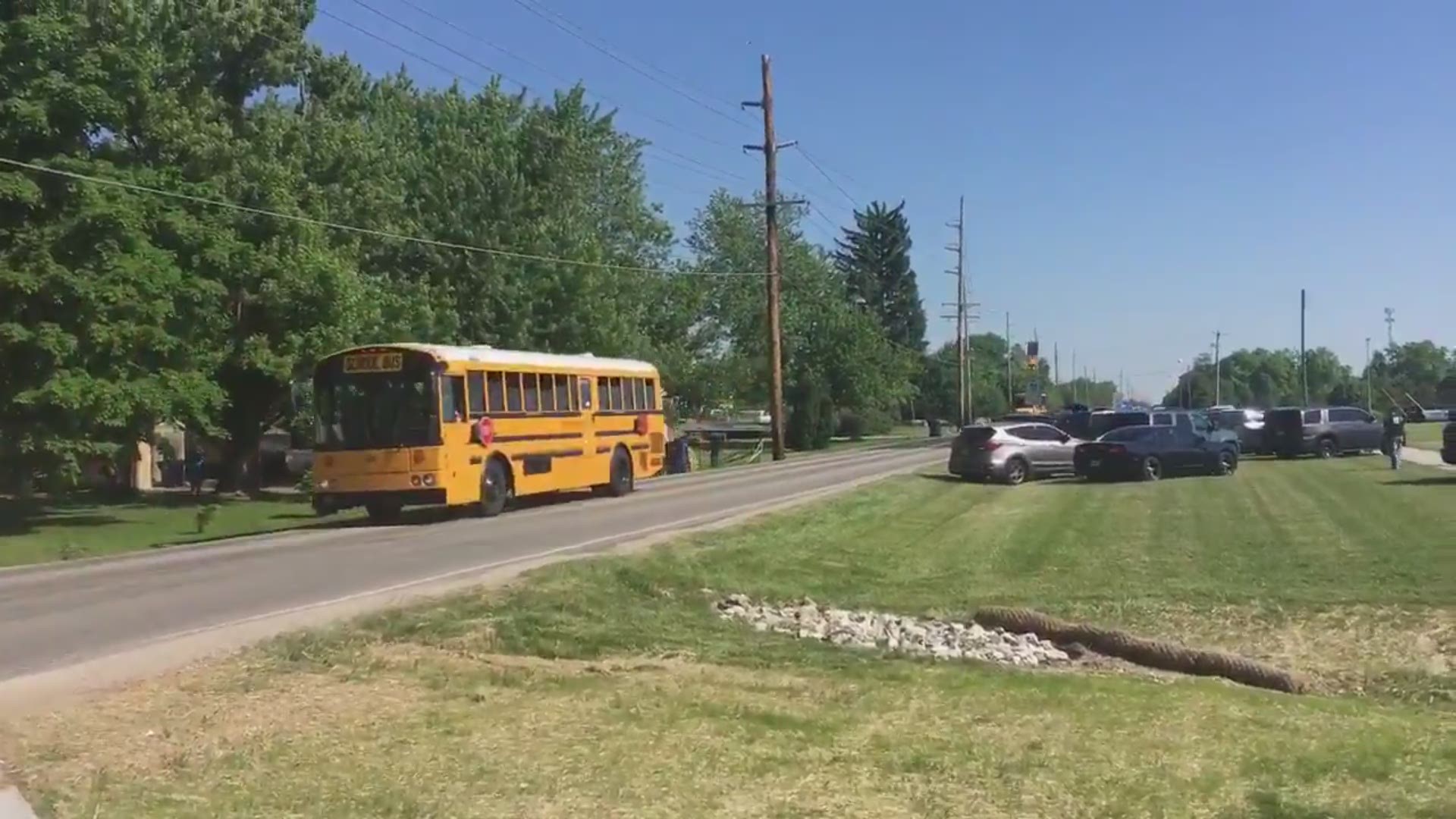 NOBLESVILLE, Ind. — The frequent tragedy of American school shootings came to Indiana on Friday when a student carrying two handguns wounded a teacher and another student at Noblesville West Middle School.

The massive law enforcement response and petrified parents searching for their children stunned the quiet city of 60,000.

"Time kind of stood still," said parent Jesse Lytle, describing the wait to find out that his seventh-grade daughter was safe.

An emergency call about an active shooter came to authorities at 9:06 a.m. Police said the student asked to be excused from the classroom and then returned with the weapons and began firing.

The student, who was not identified by authorities, was apprehended in or near the classroom.

Authorities said warrants were later served at his Noblesville home.

The injured teacher was Jason Seaman, 29.

Teacher out of surgery; teen victim's condition not disclosed

The wounded girl was taken to Riley Hospital for Children. Her identity and condition were not disclosed.

Seaman, who according to his LinkedIn account teaches science and coaches football, issued a statement saying he was "injured but am doing great."

"To all the students," he said, "you are all wonderful, and I thank you for your support. You are the reason I teach."

Seaman was described as a hero by students who said he intervened to help stop the shooter. Exactly how events unfolded in the classroom was unclear Friday.

“It’s not surprising, to be honest,” Jeremy Seaman said of his brother, who is a former football player at Southern Illinois University, husband and father of a toddler son and 1-month-old daughter. “He’s not really ever been the person to run away. When the safety of the kids is at hand, it’s not surprising to me that he was going to do what he had to do.”

Steve Vedder, who lives across the street from Jason Seaman, said that when he heard what happened, "I knew it had to be him." He called Seaman "a hero in my mind."

After the shooting a hectic scene erupted outside the school as school officials worked to lead the 1,300-some students onto buses to evacuate.

The middle school students were bused to Noblesville High School, where an apparently unrelated threat prompted a lockdown there for a period of time.

Parent Jeremie Lovall said his daughter, a seventh-grader at the school, was in the classroom when the shooting started. She called her dad, who lives in Kokomo, to tell him she was OK.

"She kept saying, 'I saw my teacher get shot,'" Lovall said.

Students crouched in classrooms with lights out

Jayden Williams, an eighth-grader, was in the locker room changing out of his gym clothes when an announcement came over the middle school's speaker system: "It's not a drill. Shots have been fired by the seventh-grade hallway."

Williams and classmates escaped through the back of the building and ran through fields to the nearby Fox Prairie Golf Course.

Student Karlie Lytle was in a classroom in the seventh-grade hall when the shooting started. For about 30 minutes, she and her classmates crouched in a corner of the room with the lights out.

A police officer eventually cleared the room and released the students to the buses headed to the high school. But at the time, Lytle's parents still had not heard any news.

"We were scared," said her father, Jesse Lytle. "We were really scared, especially when we heard it was in the seventh-grade hall."

Said the girl's mother, Megan: "You see it on the news. You think you know what it feels like. You have no idea."

Scene at Noblesville High School after an active shooter at the nearby Middle School, Friday, May 25, 2018.&nbsp;(Photo: Kelly_Wilkinson/Indy_Star)

Karlie had left her phone in her locker. On the bus, she borrowed a phone and called her father. When he heard his daughter's voice, Jesse Lytle said, "it was just ... like our prayers had been answered."

'Never thought this would happen ... not in Noblesville'

Parent Maria Rooney echoed a frequent theme among people reacting to the shooting.

"Never thought that this would happen," she said. "Not in Noblesville."

Chad Lancaster, whose eighth-grade daughter called her mother while hiding under a desk, said, "This happens in high school, not here."

The school does not have metal detectors, but it did have a school resource officer inside the school who responded appropriately, police said, though authorities did not elaborate.

"It’s heartbreaking to even imagine what these students and teachers and faculty had to endure," Gov. Eric Holcomb said after returning from an economic development trip to Europe.

Another tally in a list of U.S. school shootings

The incident was the 23rd school shooting in the U.S. this year in which at least one person was shot, according to CNN.

Indiana State Police Superintendent Doug Carter said he can't assure people a school shooting won't happen again in the state. But he praised law enforcement and school officials for their actions in the face of danger.