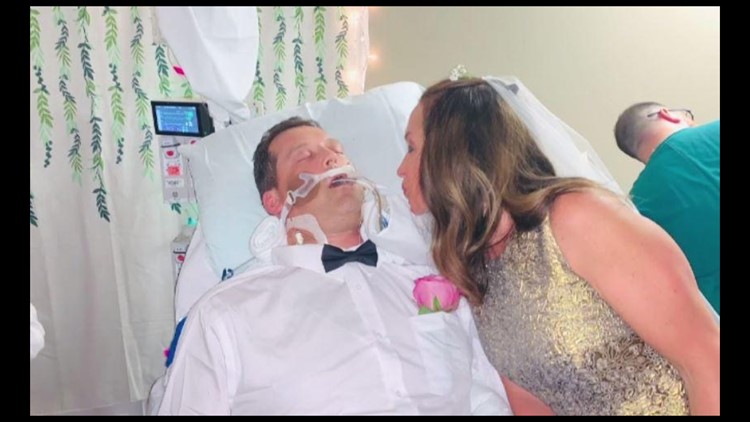 Photo by: Thomas family
Staff at Riverside Methodist Hospital in Ohio help Chris and Jennifer Thomas get married before his final hours.

“It was his heart that won me over that and his goofy personality,” Jennifer said.

The pair dated for years and Jen was unofficially a member of this vivacious central Ohio family, but a back injury hospitalized Chris.

Doctors at Riverside Methodist Hospital later discovered the pain that had lingered for some time was actually a blood clot and his condition was deteriorating.

Staff at Riverside Methodist Hospital in Ohio help Chris and Jennifer Thomas get married before his final hours.
Thomas family

Staff at Riverside knew the pair were set to marry, but Jen and the family were focused on Chris’ recovery — and the group of nurses got an idea.

“It was really overwhelming when we started walking to where they moved Chris to,” said Chad Thomas, the brother of the groom. “More than 100 doctors, nurses and hotel staff had lined both sides of the hallway.”

Dressed in a white shirt and bow tie and surrounded by his daughter Taylor, family and dozens of ICU nurses — was the wedding Chris and Jen hadn’t planned but deserved in what would be Chris’ final hours.

“It gave us all a little bit of strength — what was coming after that,” Chad said.

The family says they are forever bonded by the selfless act performed at Riverside.

Staff at Riverside Methodist Hospital in Ohio help Chris and Jennifer Thomas get married before his final hours.
Thomas family