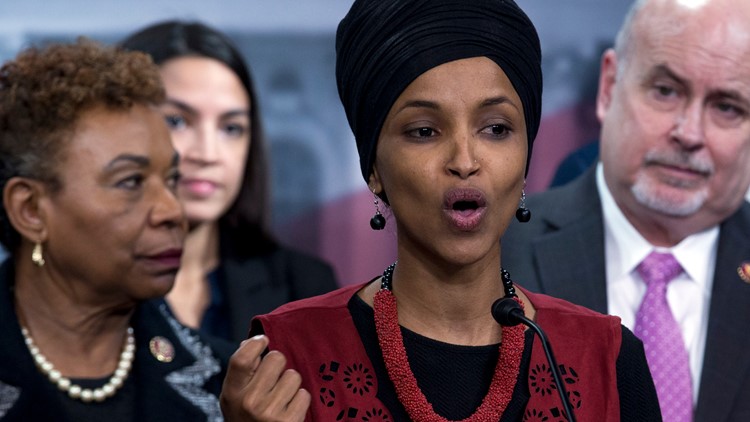 Minnesota Rep. Ilhan Omar said this week that she has found herself "stricken with PTSD," amid America's escalating tensions with Iran. While some have criticized her comments, others have chimed in in support.

"I feel ill a little bit because of everything that is taking place. I think every time I hear about...I hear of conversations around war, I find myself being stricken with PTSD," she explained during a Wednesday press conference. "And I find peace knowing that I serve with great advocates for peace and people who have shown courage against war."

Omar's comments were met with backlash from an Indiana congressman who served in Afghanistan.

"This is a disgrace and offensive to our nation's veterans who really do have PTSD after putting their life on the line to keep America safe," Rep. Jim Banks tweeted.

Omar responded, saying it was "shameful" of Banks to erase the PTSD of survivors. Omar was born in Mogadishu, Somalia in 1981 and fled the country when she was 10 with her family at the beginning of the Somali Civil War in 1991. Her family spent four years at a refugee camp in Kenya before coming to the United States in 1995. She moved to Minnesota in 1997.

PTSD, or Post Traumatic Stress Disorder, is a psychiatric disorder that can occur in those who have experienced or witnessed a traumatic event. It does not only effect combat veterans and the American Psychiatric Association gives natural disaster, a serious accident, a terrorist act, rape and violent personal assault as examples of events that can cause PTSD along with war and combat.

Others on Twitter expressed support for Omar's PTSD comment. Jason Kander, a veteran and former Secretary of State in Missouri said "It's not up to us to decide who is and is not 'worthy' of PTSD."

"Trauma is trauma. A uniform is not required," Kander tweeted.

"Veterans like us know that people wearing uniforms aren't the only ones impacted by war," the organization tweeted.

RELATED: President Trump: Iran appears to be 'standing down' after missile attack