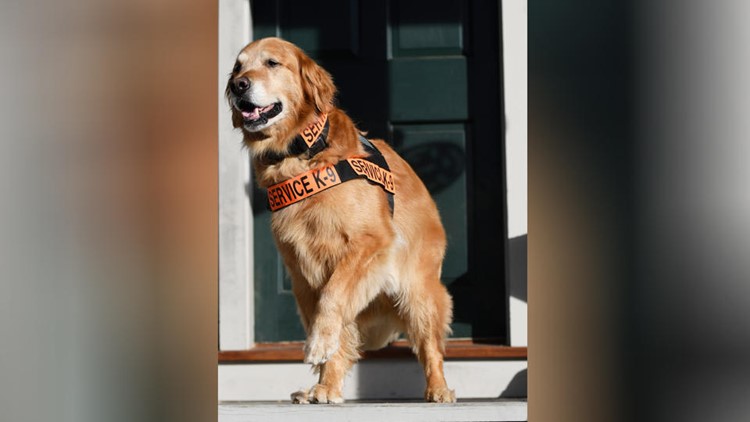 Photo by: Cyrus McCrimmon/Educated Canines Assisting with Disabilities via AP

Service dog whose story raised awareness for PTSD has died

HARTFORD, Conn. (AP) — A service dog named Tuesday who was the subject of several books by an Iraqi war veteran who suffered from post-traumatic stress disorder has died.

The 13-year-old golden retriever died on his namesake day in Burlington, Connecticut, according to Educated Canines Assisting with Disabilities, a service dog training organization that places dogs with veterans.

Tuesday gained fame touring the country with former U.S. Army Captain Luis Carlos Montalvan, who wrote the memoir "Until Tuesday: A Wounded Warrior and the Golden Retriever Who Saved Him."

The book, the first of four written by Montalvan about his life with Tuesday, became a bestseller in 2011. It was credited with helping raise awareness of PTSD and the availability of service dogs for veterans.

Montalvan was a decorated veteran, who was wounded in Iraq and earned two Bronze Stars and a Purple Heart.

After he came home, his extreme PTSD often prevented him from even leaving his apartment, said Dale Picard, co-founder and executive director of ECAD.

But that changed when he received Tuesday.

Picard said the dog would nudge him awake when he had night terrors, or explore the house when Montalvan became concerned someone may have broken in. He also would bring Montalvan his medication case when it was time for him to take his prescriptions.

"Tuesday kept him calm, kept him so he could function," said "He began to participate in life again. Before this story, not a lot of veterans were receiving service dogs, because it wasn't well known how much benefit they would be."

Since the book's publication, ECAD has placed more than 40 other dogs with veterans, Picard said.

Montalvan took his own life in 2016. He had left Tuesday with family members and the dog was not with him at the time.

Tuesday was later placed as a service dog with a Connecticut cancer patient. He died in the arms of that man, Gordon Schafer, at their home after being diagnosed with a mass in his abdomen.

©2019 by The Associated Press. All rights reserved. This material may not be published, broadcast, rewritten or redistributed.