The current and former vice presidents shared an elbow bump — the popular COVID-era handshake replacement — as did Biden and Karen Pence. 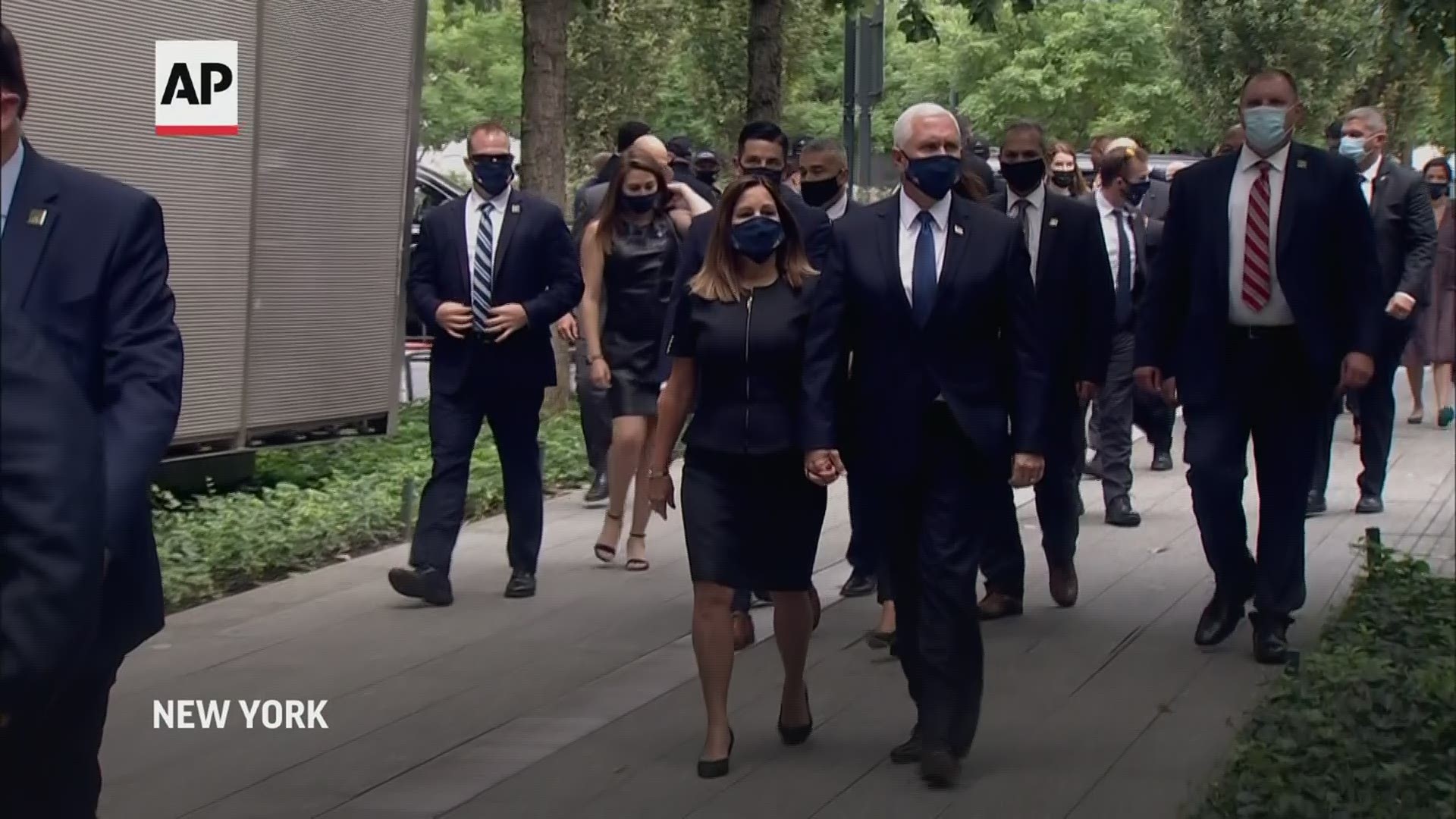 President Donald Trump and his Democratic rival, Joe Biden marked the 19th anniversary of the Sept. 11 attacks on Friday at memorial services where their differences in style couldn’t have been more sharply on display.

As Biden approached those who’d lost loved ones at Ground Zero and shared the pain of his own losses, Trump vowed that “America will always rise up, stand tall and fight back,” speaking at the Shanksville, Pennsylvania, site where hijacked Flight 93 crashed after passengers rushed the cockpit.

Biden also visited Shanksville later in the day, laying a wreath at the memorial and meeting with families, but the two did not cross paths. And while Americans were focused on the commemorations, the political significance of the visits to Shanksville was hard to ignore: Pennsylvania is a crucial battleground state in the 2020 election. Trump won there by less than 1 percentage point four years ago, and Democrats hope they can return it to their column this year.

Biden insisted that he would steer clear of politics on a national day of mourning taking place in the midst of another unfolding tragedy, the pandemic.

“I’m not gonna make any news today. I’m not gonna talk about anything other than 9/11,” Biden told reporters. “We took all our advertising down, It’s a solemn day, and that’s how we’re going to keep it, OK?” The Trump campaign did not follow suit, in a break with tradition, and was quick to point out Biden ads that were still running Friday. 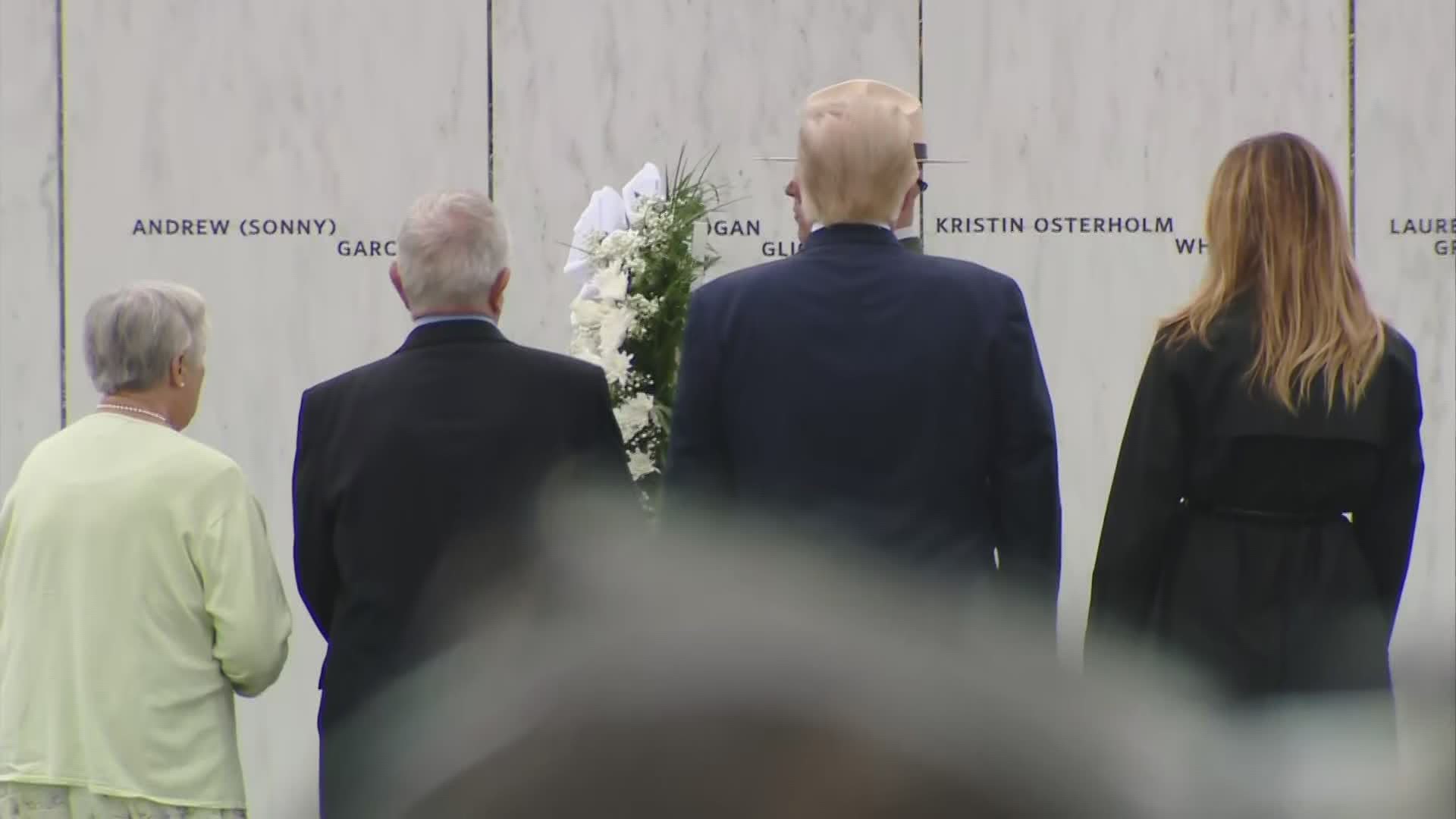 Biden's campaign said that any airings had been inadvertent and that they were reaching out to affiliate stations for an explanation and to remedy.

In Shanksville, Trump shared the story of Flight 93, which officials say had been headed for Washington, D.C. until passengers teamed up against the hijackers, memorably declaring “let’s roll” as they took them on mid-flight.

RELATED: US marks 9/11 anniversary at tributes shadowed by coronavirus

“The heroes of Flight 93 are an everlasting reminder that no matter the danger, no matter the threat, no matter the odds, America will always rise up, stand tall, and fight back,” Trump said as he voiced empathy for the families of the victims, singing out several by name and telling them their pain “is the shared grief of our whole nation."

Trump also noted that the country had come together after 9/11, which was a striking contrast to the stark divisions on display today as the nation grapples with the pandemic, economic turmoil and a reckoning over race and police violence.

“It was a unity based on love for our families, care for our neighbors, loyalty to our fellow citizens, pride in our great flag, gratitude for our police and first responders, faith in God and a refusal to bend our will to the depraved forces of violence, intimidation, oppression and evil," Trump said.

It was a different scene in Lower Manhattan as Biden attended the 9/11 Memorial & Museum’s annual commemoration at Ground Zero, along with Vice President Mike Pence.

In a rare moment of detente in a vitriolic campaign, Biden approached Pence after arriving and tapped him on the shoulder to say hello. The current and former vice presidents then shared an elbow bump — the popular COVID-era handshake replacement — as did Biden and Karen Pence.

Biden's running mate, Sen. Kamala Harris, spoke at a memorial ceremony in Northern Virginia, a few miles from the Pentagon where terrorists crashed yet another plane on Sept. 11, 2001.

While public officials were not part of the official program in New York, Biden spent time at the ceremony consoling families in attendance. At one point, as the names of victims were being read, he spotted a woman crying in the crowd. Amanda Barreto, 27, of Teaneck, New Jersey, lost her godmother and aunt in the 9/11 attacks.

She said Biden “wanted to let me know to keep the faith.” He told her “he knows what it means to lose someone. He wanted me to stay strong. And he’s so sorry for my loss.” She said she appreciated his comments and would be voting for him this fall.

Biden also spotted 90-year-old Maria Fisher, who lost her son in the attacks. He told her he, too, had lost a son, a reference to his son Beau’s death from cancer. “It never goes away, does it?” he lamented, and handed her a rose.

“It takes a lot of courage for someone that lost someone to come back today,” Biden later told The Associated Press. “I know from experience, losing my wife, my daughter, my son, you relive it, the moment as if it’s happening. It’s hard. ... So I admire the families who come.”

In Shanksville later Friday, Biden laid a wreath at the memorial and greeted the families of several victims, voicing respect for the sacrifices they'd made. He then paid a visit to the Shanksville Volunteer Fire Department, delivering a Bundt cake, pastries and refreshments. Biden said the last time he'd visited, he'd promised to bring beer — and he came through, presenting two six-packs to a group of firefighters, to cheers.

The National Park Service, which co-hosts the annual Flight 93 memorial event in Pennsylvania, had originally said it was planning an abbreviated ceremony this year with no speakers to minimize the spread of the coronavirus. But after Biden and then the White House announced their plans to visit, the agency’s website was updated to reflect a new schedule that included remarks from Trump.

In 2016, the 9/11 memorial events became a flashpoint in the presidential campaign after then-Democratic nominee Hillary Clinton abruptly left the Ground Zero ceremony and was seen stumbling as she tried to get into a van. Trump, who spoke repeatedly of that during the campaign, also spent the day in New York and paid his own visit to the memorial in Lower Manhattan.

AP’s Advance Voting guide brings you the facts about voting early, by mail or absentee from each state: https://interactives.ap.org/advance-voting-2020