Trump not ready to commit to election results if he loses

The president told "Fox News Sunday" that it's too early to make such an ironclad guarantee, and he scoffs at polls showing him lagging behind Democrat Joe Biden. 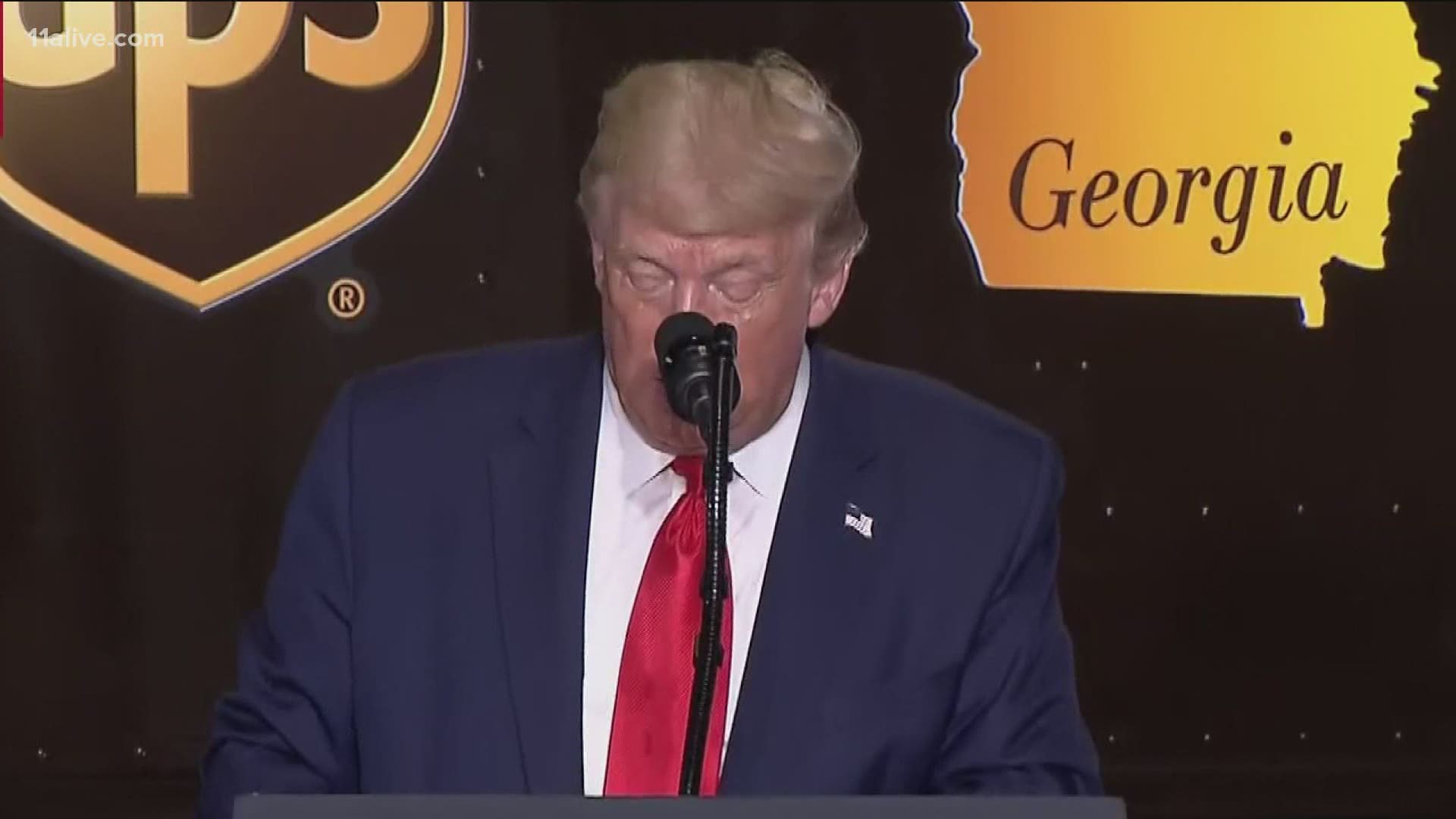 President Donald Trump is refusing to publicly commit to accepting the results of the upcoming White House election, recalling a similar threat he made weeks before the 2016 vote, as he scoffs at polls showing him lagging behind Democrat Joe Biden. Trump says it's too early to make such an ironclad guarantee.

"I have to see. Look ... I have to see," Trump told moderator Chris Wallace during a wide-ranging interview on "Fox News Sunday." "No, I'm not going to just say yes. I'm not going to say no, and I didn't last time either." The Biden campaign responded: "The American people will decide this election. And the United States government is perfectly capable of escorting trespassers out of the White House."

Trump also hammered the Pentagon brass for favoring renaming bases that honor Confederate military leaders — a drive for change spurred by the national debate about race after George Floyd's death. "I don't care what the military says," the commander in chief said.

The president described the nation's top infectious diseases expert, Dr. Anthony Fauci, as a "a little bit of an alarmist" about the coronavirus pandemic, and Trump stuck to what he had said back in February — that the virus is "going to disappear." On Fox, he said, "I'll be right eventually." The United States tops the global death toll list with over 140,000 and confirmed infections, with 3.7 million.

It is remarkable that a sitting president would express less than complete confidence in the American democracy's electoral process. But for Trump, it comes from his insurgent playbook of four years ago, when in the closing stages of his race against Hillary Clinton, he said he would not commit to honoring the election results if the Democrat won.

RELATED: DeVos says schools shouldn't get federal funds if they don't reopen in the fall

Pressed during an October 2016 debate about whether he would abide by the voters' will, Trump responded that he would "keep you in suspense."

Trump has seen his presidential popularity erode over his handling of the coronavirus pandemic and in the aftermath of nationwide protests centered on racial injustice that erupted after Floyd's death in Minneapolis nearly two months.

Trump contends that a series of polls that show his popularity eroding and Biden holding an advantage are faulty. He believes Republican voters are underrepresented in such surveys.

"First of all, I'm not losing, because those are fake polls," Trump said in the taped interview, which aired Sunday. "They were fake in 2016 and now they're even more fake. The polls were much worse in 2016."

Trump was frequently combative with Wallace in defending his administration's response to the pandemic, weighing in on the Black Lives Matter movement and trying to portray Biden, the presumptive Democratic nominee, as lacking the mental prowess to serve as president.

Among the issues discussed was the push for wholesale changes in policing that has swept across the nation. Trump said he could understand why Black Americans are upset about how police use force disproportionately against them.

"Of course I do. Of course I do," the president said, adding his usual refrain that "whites are also killed, too."

He said he was "not offended either by Black Lives Matter," but at the same time defended the Confederate flag, a symbol of the racism of the past, and said those who "proudly have their Confederate flags, they're not talking about racism."

"They love their flag, it represents the South, they like the South. That's freedom of speech. And you know, the whole thing with 'cancel culture,' we can't cancel our whole history. We can't forget that the North and the South fought. We have to remember that, otherwise we'll end up fighting again. You can't just cancel all," Trump said.

Wallace challenged Trump on some of his claims and called out the president at time, such as when Trump falsely asserted that "Biden wants to defund the police." The former vice president has not joined with activists rallying behind that banner. He has proposed more money for police, conditioned to improvements in their practices.

Trump continues to insist that Biden "signed a charter" with one of his primary rivals on the left, Sen. Bernie Sanders of Vermont. At one point in the interview, Trump calls on aides to bring him documentation to support his assertion. Trump, however, is unable to point to language from a Biden-Sanders task force policy document released this month by the Biden campaign.

President Trump reacts to Mary Trump's new book. Plus, he answers whether or not he will accept the 2020 election results. #FoxNewsSunday pic.twitter.com/KmmGdgzcVY

Trump stood behind his pledge to veto a $740 billion defense bill over a requirement that the Defense Department change the names of bases named for Confederate military leaders. That list includes Fort Bragg in North Carolina, Fort Hood in Texas and Fort Benning in Georgia.

The president argued there were no viable alternatives if the government ever tried. "We're going to name it after the Reverend Al Sharpton?" Trump asked, referring to a prominent civil rights leader. "What are you going to name it?"

Trump, 74, stuck to a campaign charge that Biden, 77, is unable to handle the rigors of the White House because of his age. As for polls showing the incumbent is trailing, Trump noted he was thought to be behind for much of the 2016 contest. "I won't lose," he predicted.

The president and top advisors have long accused Biden of using the pandemic as an excuse to stay in "his basement" in his Delaware home. Biden has indeed shifted much of his campaign online, but frequently travels in Delaware and Pennsylvania, organizing speeches and small gatherings with voters and community leaders that are within driving distance of his home. Biden's campaign says it will begin resuming normal travel and campaign activities, but only when health officials and state and local authorities say it is safe.

Questioned about the coronavirus, Trump chided Fauci, the National Institutes of Health expert, and repeated false claims that anybody could get a test and that increased testing was the only reason that the U.S. was seeing more cases.

Case are rising because people are infecting each other more than they were when most everyone was hunkered down. The percentage of tests coming back positive for the virus has been on the rise across nearly the entire country.