Fire and ice: Record weekend highs to cold and snow in Denver Tuesday

Fall begins Tuesday but it won't feel like it! Temperatures will b above average across Eastern Colorado. Look for a few isolated showers late Tuesday afternoon. 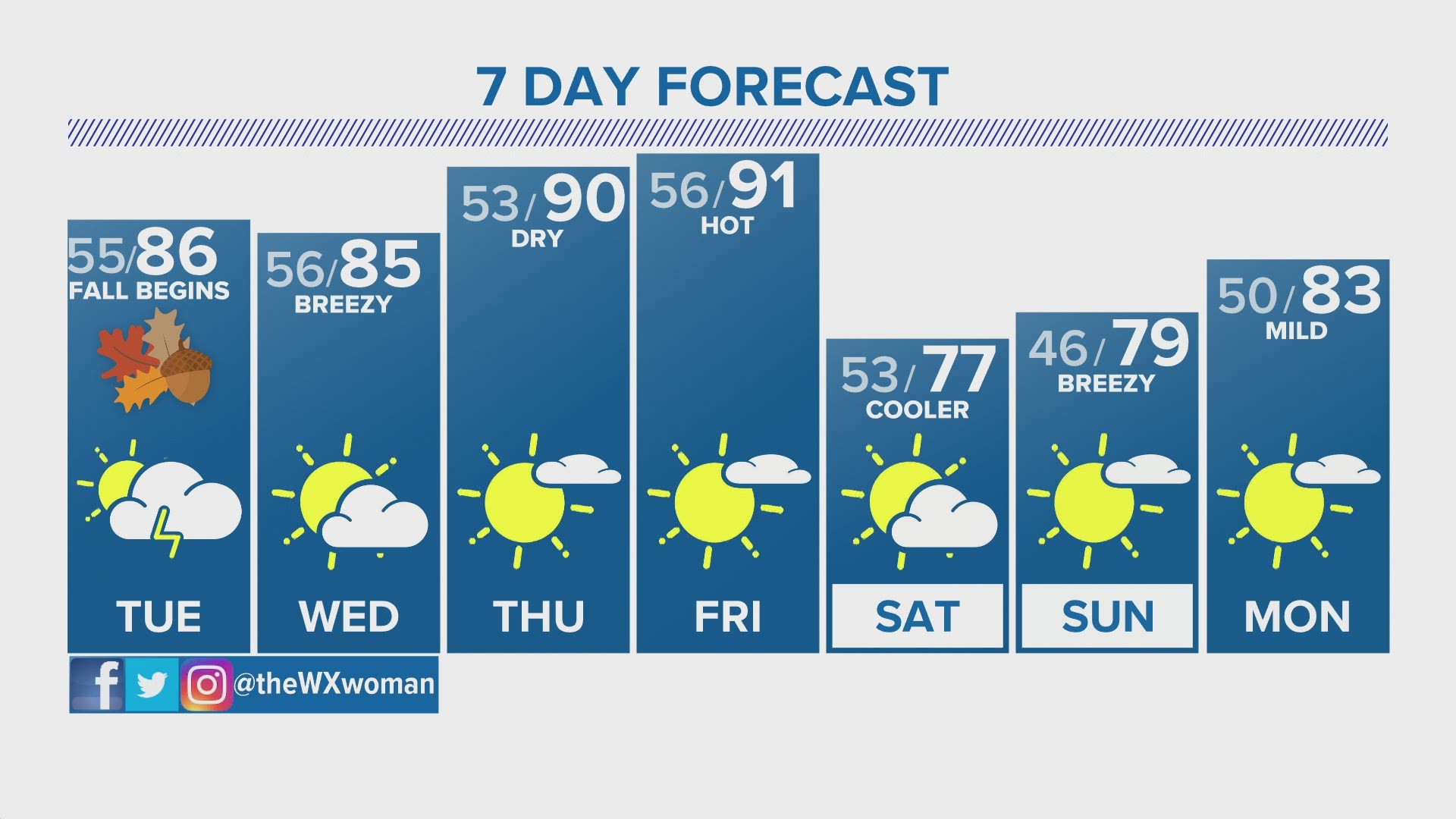 TODAY AT A GLANCE: Fall officially begins Tuesday but it'll feel more like summer! Temperatures will soar into the mid to upper 80s Tuesday afternoon. A weak system will move across Colorado bringing a small chance for a few afternoon showers to the Front Range.

An Air Quality Alert is in effect until 4 p.m. Tuesday for the the northern mountains and Larimer county. Smoke from the Cameron Peak fire and Mullen fire will cause visibility to be poor and air quality to be unhealthy for sensitive groups at times. You may want to limit your time outdoors this afternoon. Air quality and visibility will be moderate in metro Denver

Highs climbed to 90 degrees over the weekend, on Saturday, setting a new record for number of 90 degree days Denver has seen in a season. That total is now at 74 days. The record was previously set in 2012 when Denver saw 73 days at or above 90. Temperatures will warm close to 90 again for the end of the week! Thursday and Friday's highs will also be close to record-setting. A cool front drops temps into the mid 70s for the weekend!

TUESDAY: Partly cloudy with a chance for a 20% for showers in the afternoon. Morning lows from 53 to 58, afternoon highs from 83 to 88.

WEDNESDAY: Partly cloudy, breezy and mild. Morning lows from 53 to 58, afternoon highs from 82 to 87.

SATURDAY: Mostly sunny, cooler, with isolated showers. Morning lows from 50 to 55, afternoon highs from 75 to 80.

RELATED: Miss getting daily 9NEWS forecasts to your phone? Here's how to get them back

EMAIL FORECAST: Sign up to have the weather forecast delivered to your inbox twice a day!

TRAFFIC CENTER: Keep up on crashes and travel times here

If you have a weather report, photo or video to share, you can contact the 9NEWS Weather Team in these ways:

The 9NEWS Weather team of Kathy Sabine, Becky Ditchfield, Danielle Grant and Kylie Bearse update the Denver weather forecast multiple times each day. Bookmark this link to always have the latest forecast from 9NEWS. The team values your local weather reports and often features your photos and videos during weather segments in all newscasts.