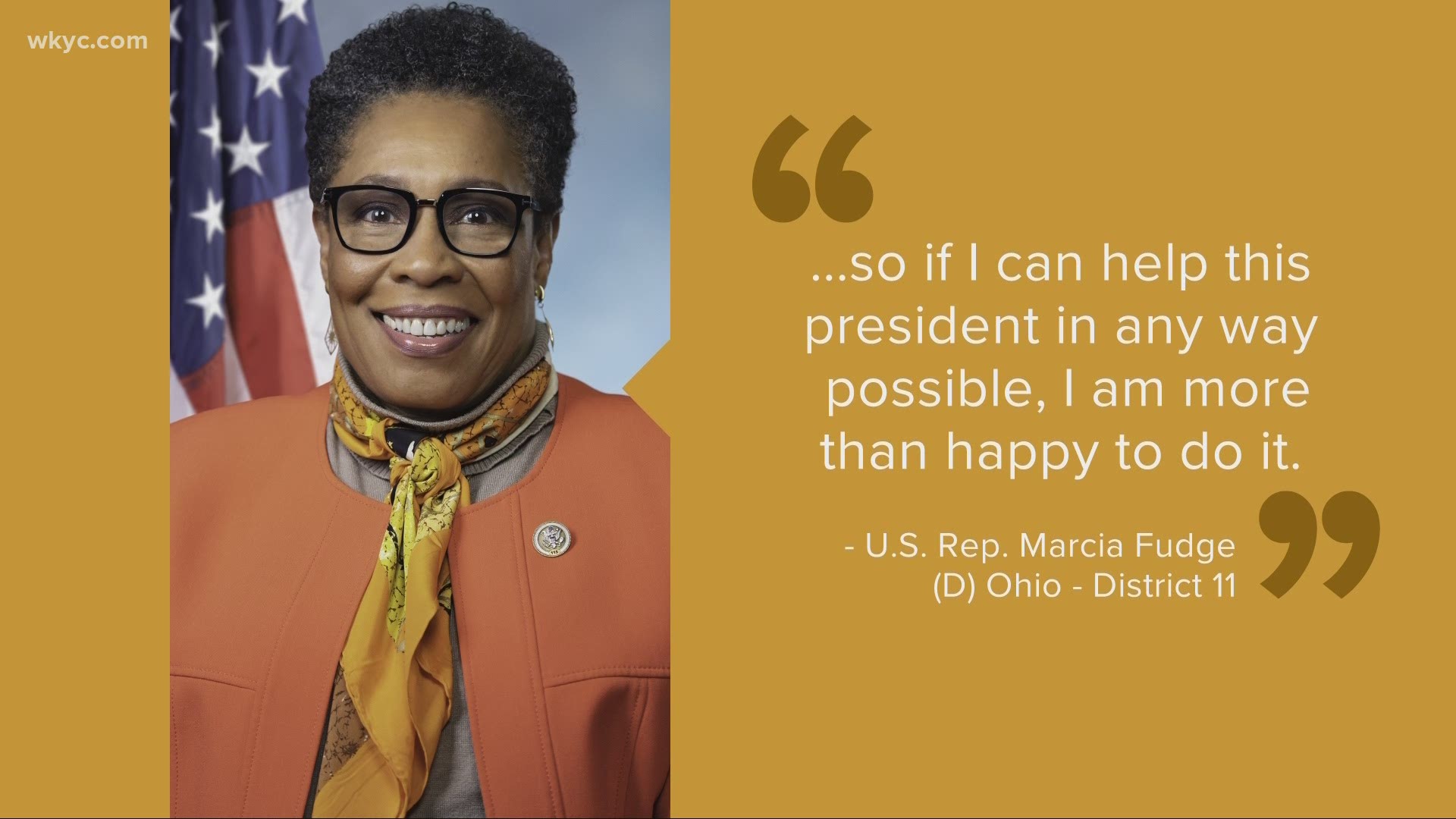 CLEVELAND — President-elect Joe Biden continues to evaluate possible members of his cabinet, and it appears one of his selections will hail from Northeast Ohio.

According to a report by Politico and then confirmed by NBC News, Biden will nominate U.S. Rep. Marcia L. Fudge to serve as the next U.S. Secretary of Housing and Urban Development. The 68-year-old has served as representative of Ohio's 11th congressional district since 2008.

Two sources spoke of Fudge's selection to NBC's Kirsten Welker and Geoff Bennett. Neither the Biden campaign nor Fudge's office has confirmed the reports, and 3News is working to independently gather more information.

NEWS: Biden has chosen Rep. Marcia Fudge to lead the Department of Housing and Urban Development (HUD), two sources tell @kwelkernbc and me. Fudge had long been a top contender, but she and her allies were pushing for Agriculture Secretary.@tylerpager first reported.

Fudge had previously told Politico of her desire to become the next Secretary of Agriculture, citing her loyalty to the winning presidential ticket of Biden and Vice President-elect Kamala Harris. At the time, Fudge also lamented her belief that Black politicians such as herself are often relegated to a select few cabinet positions, and included HUD in that category.

"As this country becomes more and more diverse, we're going to have to stop looking at only certain agencies as those that people like me fit in," she told the publication last month. "You know, it's always 'we want to put the Black person in labor or HUD.'"

However, NBC's Jake Sherman caught up with Fudge at the U.S. Capitol late Tuesday afternoon. While the congresswoman would not confirm her selection, she said it would be an "honor and a privilege" to lead the department.

"It is something that in my wildest dreams I never would've thought about," she said. "If I can help this president in any way possible, I'm more than happy to do it."

We caught up with @RepMarciaFudge in the capitol just now.

She said if she were asked to be hud secretary — which @politico scooped— she’d be honored. Here’s the full quote. She wouldn’t confirm much. pic.twitter.com/4lk9EFIVwX

A graduate of the Ohio State University and of Cleveland State University's Marshall College of Law, Fudge first worked for the Cuyahoga County prosecutor's office and eventually rose to the rank of Director of Budget and Finance. She made her first run for political office in 1999, and was elected the first African American mayor of Warrensville Heights.

Fudge was reelected mayor twice before her life changed forever in 2008, when Rep. Stephanie Tubbs Jones died of a cerebral hemorrhage suffered while driving her car. The congresswoman's death at the age of just 58 sent shockwaves across the area, with Fudge being personally affected, having served as Jones' chief of staff before becoming mayor. Fudge decided to run in the race to fill Jones' 11th district seat, and after easily winning the Democratic primary cruised to victory in the heavily Democratic district.

Fudge has held numerous positions during her 12 years in Congress, including recently as chair for the House Committee on Agriculture's Subcommittee on Nutrition, Oversight, and Department Operations. She also served as Chair for the 2016 Democratic National Convention, being called in at the last minute after permanent DNC Chair Debbie Wasserman Schultz resigned following allegations of bias during that year's presidential primaries.

However, Fudge's tenure has not been without controversy, notably due to her connections to disgraced former Cuyahoga County Judge Lance Mason. Fudge had written a letter to the court in 2015 asking for leniency in the sentencing of Mason for the brutal assault of his then-wife Aisha Fraser, calling him "a good man who made a very bad mistake." Following Mason's release from prison, Fudge also faced allegations she helped Mason get a job at Cleveland City Hall, a charge she strenuously denied.

Following a divorce, Mason stabbed Fraser to death in November of 2018 in front of their children, and is currently serving 35 years to life in prison after pleading guilty to aggravated murder. Fudge further distanced herself from Mason and mourned the "horrific" killing of Fraser, but her role in the ordeal made headlines across the country, and may have played a part in her decision not to challenge Nancy Pelosi for Speaker of the House that winter.

Should she be confirmed by the Senate, Fudge would replace Dr. Ben Carson, who has served as HUD secretary since the beginning of President Donald Trump's administration. A special election would also need to be held to replace Fudge in the House of Representatives, and Cuyahoga County Councilwoman and Democratic Party Chair Shontel Brown has told 3News' Russ Mitchell she will run for the presumably open seat. Politico also reports former State Sen. Nina Turner, who gained national recognition for her role in Sen. Bernie Sanders' presidential campaigns, may also throw her hat into the ring.

This is a developing story and 3news will continue provide updates.