In the one-hour phone call with election officials, Trump insisted he won the state and threatened legal consequences against Raffensperger and his staff. 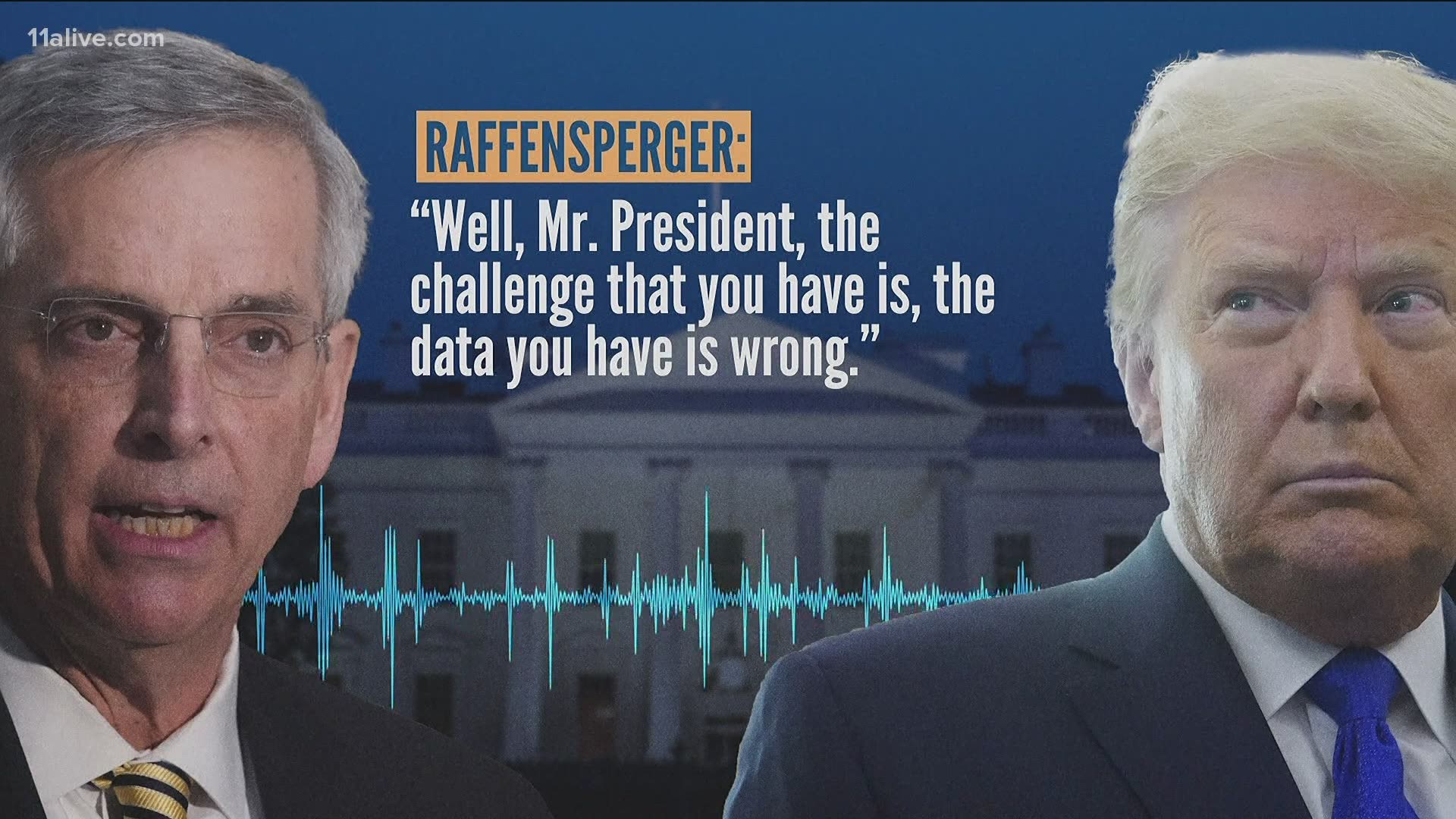 ATLANTA — Georgia's Secretary of State is weighing in after audio of a phone call between him and Donald Trump was leaked to the public on Sunday - and amid a myriad of claims by the president.

Brad Raffensperger described it as feeling like "David going up against Goliath" fighting misinformation.

"Bit-by-bit, we debunk it, but our megaphone's not that large, we have 40,000 Twitter followers and President Trump has 80 million," he said.

In an interview with 11Alive's Brendan Keefe, Raffensperger suggested such claims had been repeated during the call that was recorded.

He said in an interview with 11Alive's Brendan Keefe that no one in his home was responsible for the recording, but he also said there was no agreement ahead of time that the call wouldn't be recorded.

"He had plenty of people on that call and so the information's out there in the public domain now," he said.

And from that call has come many details that have now taken over the political landscape just days before two Senate runoffs.

The Secretary of State said the call was hastily arranged after the president saw him on Television.

"I was on Fox News, Saturday morning, and he didn't like what I said because I said that we ran a fair, honest election in Georgia and I explained how he lost the election."

11Alive News obtained a recording of the call from a government source. In the conversation, the president pressures Raffensperger to "recalculate" the Georgia vote count because "I just want to find 11,780 votes," Trump said.

In the one-hour phone call, Trump insisted he won the state.

Despite the contents of the recording, Raffensperger wouldn't venture into the legality of Trump's comments.

"I'm an engineer," he said. "Lawyers, they'll debate both sides of that coin."

Trump would later take to Twitter to describe the call suggesting that Raffensperger was "unwilling or unable to answer questions such as the 'ballots under table' scam, ballot destruction, out of state 'voters', dead voters, and more."

He said that, had it not been for that tweet, the world would have likely never heard the contents of that meeting.

"It was a private conversation as far as I was concerned," he said. "And he broke privacy when he put out a tweet - but the tweet was false."

As a result, he said he felt compelled to respond.

"If you're gonna put out stuff that we don't believe is true, we're going to respond in-kind," he said.

And as for false claims repeated by the president during the call, Raffensperger pointed to Trump's representatives.

"I do believe that his advisors have not served him well," he said. "Rudy Guiliani came down to this building here - he's been here twice - and both times he's given false testimony that's been totally debunked."

He added that Guiliani "sliced and diced" video to create a false narrative.

"We had people come in, several media sources have seen the whole run of the 24-hour - 24-hours-a-day surveillance that we had there and totally debunked it," he added. "So, ballots weren't stuffed, and so Rudy Giuliani knows this and yet he has said this and he has said it twice."