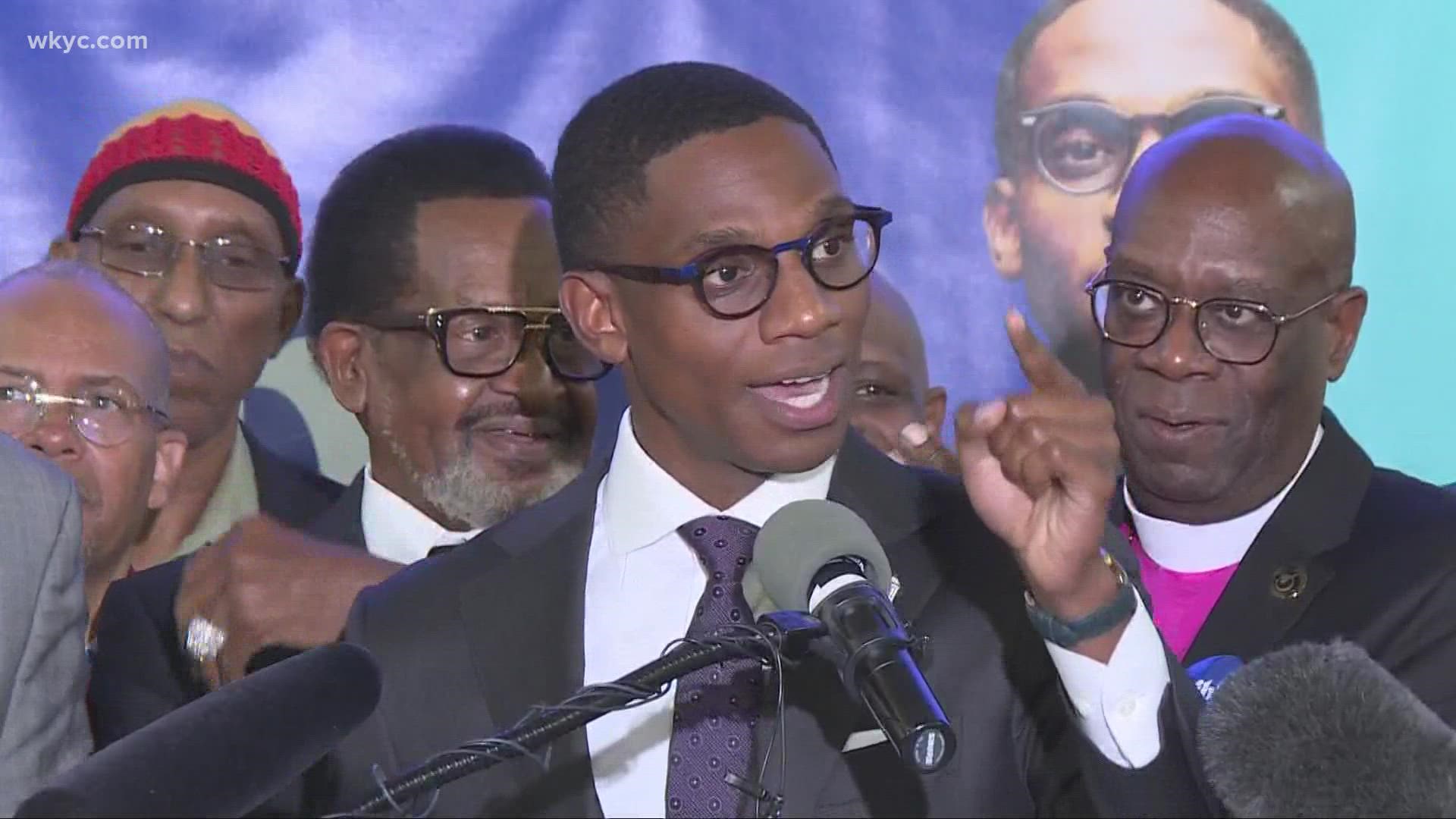 CLEVELAND — Raised on the city's East Side but unknown to voters just 300 days ago, Justin Bibb will become Cleveland's 57th mayor.

Just 34-year-old, he will become the second youngest mayor in the city's history behind former mayor Dennis Kucinich, who was elected at age 31.

Bibb won decisively in the September primary and again last night without every holding public office. He campaigned on that outside status, arguing Cleveland needs change and new thinking.

It worked well against City Council President Kevin Kelley, whom Bibb tied to four-term incumbent Mayor Frank Jackson. Bibb has said that Jackson and Bibb were steady leaders but he portrayed them as lacking vision and bold leadership.

Bibb also portrayed himself as a progressive, backing police reform and talking up technology. In one campaign mailer, Bibb featured himself riding a scooter with a gang of millennials.

Bibb says his time as business and nonprofit executive, where he focused on using data to guide decisions, is the experience City Hall needs now.

But he takes City Hall during a time of crisis, brought on by several failing departments and economic stress triggered by the pandemic. He also will have to wrestle with remaking the police department according to Issue 24, a charter amendment that passed last night and shifts oversight of the department to a civilian-led board and commission. Bibb said last night he has not time to waste.

"The work is just beginning," the mayor-elect said. "Tonight we will celebrate, and tomorrow we are going to roll up our sleeves and do the hard work of moving our city forward, in a better direction."

Bibb will succeed Frank G. Jackson, who has held the office of mayor of Cleveland for 16 years. He will also be the second youngest mayor in the city's history behind Dennis Kucinich, who was just 33 when he took office in 1978.

Bibb's opponent, current City Council President Kevin Kelley, conceded defeat around 10:30 p.m. When all votes were tallied, Bibb outlasted Kelley by just under 15,000 votes, or a percentage margin of 63%-37%.

"When you have elections, you can do one of two things: ... You can feel like you were somehow done wrong, or we can come together," Kelley said as he offered his support to the new mayor. "We believe in a better Cleveland, and because of that, we are not going to hold grudges."

On the road to Cleveland City Hall, which began nearly a year ago for some, Kelley and Bibb bested five other candidates. Combined, they raised and spent more than $2 million, each benefiting from financial support from labor unions.

The two candidates often sparred in debates and town halls over the differences in their respective resumes. Kelley has been a member of Cleveland City Council since 2005, representing several West Side neighborhoods, including Old Brooklyn, in Ward 13. He became council president in 2014.

The 34-year-old Bibb came in as a political outsider. He works for the Spokane, Washington-based nonprofit Urbanova, which helps cities and others employ smart technology to be more efficient. He has sat on local boards, including the Regional Transit Authority's.

The pair also differed in their view of Issue 24, the proposed charter amendment that would shift police oversight – including discipline and policy -- to a civilian-led board and commission. Kelley and police oppose the issue, arguing it gives too much authority to people untrained in policing; Bibb is a vocal backer of Issue 24, saying he's willing to share power and that civilian oversight is needed to advance police reforms.

Issue 24 passed on Tuesday by a wide margin, which means Bibb will have the opportunity to appoint board members once he is sworn in as mayor.

Bibb's campaign was driven, in part, by younger voters whose seemed to respond to his message of change. He paid special tribute to those supporters in his victory speech.

"Over a hundred students across this city and counting that fueled this movement," he said. "Don't tell me young people can't roll up their sleeves and make change in this city."