Bibb addressed resume and career path in an interview with 3News' Mark Naymik. You can watch the full conversation below. 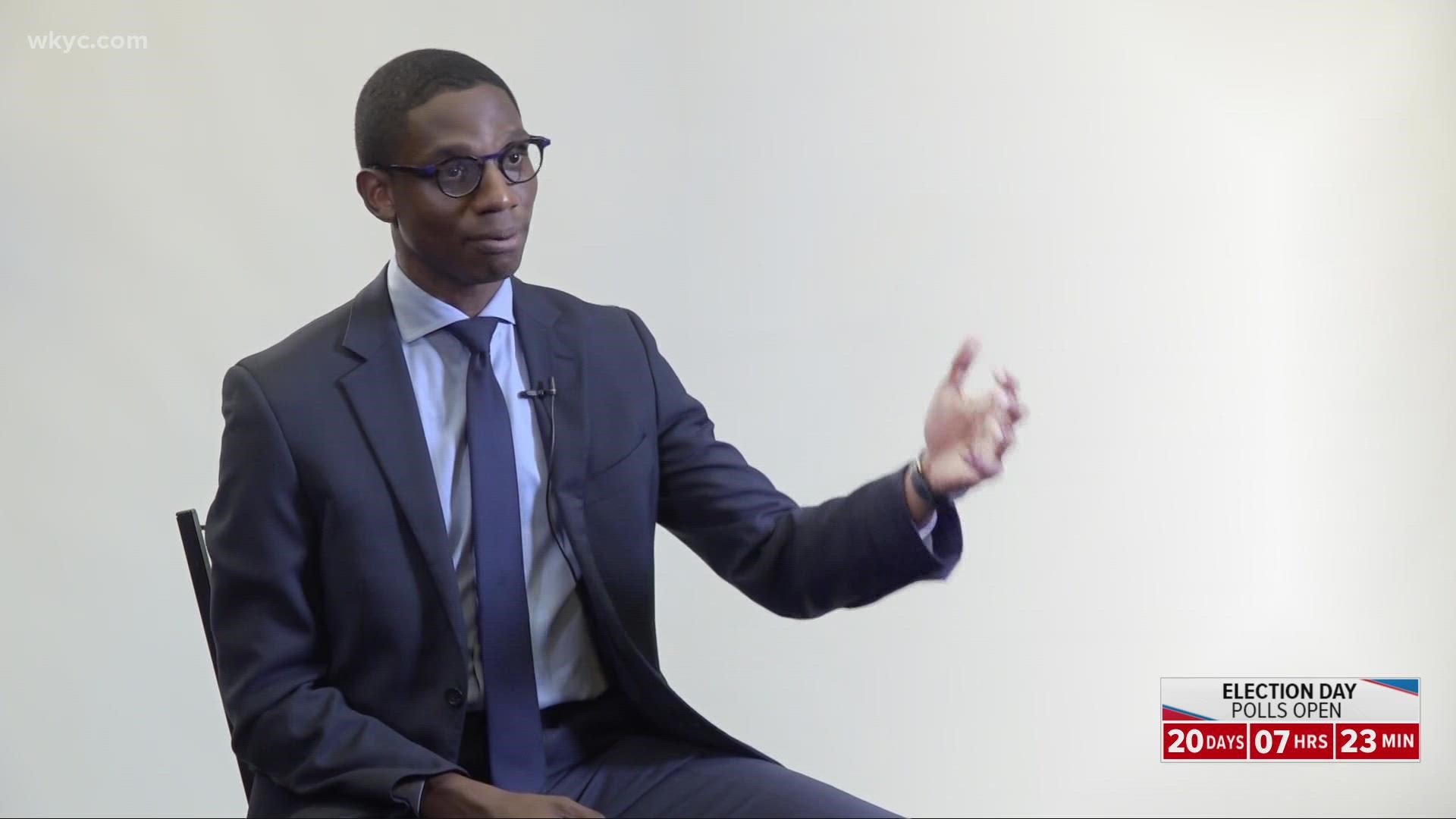 CLEVELAND — Though just 34, Cleveland mayoral candidate Justin Bibb has carried big titles in his young professional career, including chief strategy officer at a nonprofit and vice president at a bank. He’s also held the title --  “Senior Consultant and Head of Global Cities Practice” -- at a well-known consulting firm.

But his resume is also filled with frequent job changes. Bibb's resume shows he’s not held a job for more than two years during any single stretch.

Bibb recently addressed his resume and career path in an interview with 3News.

“Well, we're living in a different age where my generation doesn't stay at a firm for 20 plus years like you saw with the pride generation before us,” he said. “At every job I've had, I've had impact. I've been promoted in several of those jobs, and I've worked at some of the highest levels of government and the private sector. And I'll also say this in terms of my civic impact and civic commitment. I've been a good representative of what leadership can look like when you're working for a local government or if you're working for a large Corporation. And you're also doing the hard work of being an ambassador for that organization in the community as well.”

Watch a larger outtake of the interview below:

While finishing his degree in urban studies at American University in Washington D.C., Bibb started working in 2008 as an associate partner for Gallup, a management consulting firm in Washington.

He continued working at Gallup after graduation until September 2010. That’s when he joined the National Conference on Citizenship, a Washington-based nonprofit that promotes civic participation across the country. There, he was a director with an annual salary of $80,000.

In an online primary forum in September with opponent and Cleveland Councilman Basheer Jones, Bibb described himself as the “youngest cabinet member” in FitzGerald’s cabinet.

He was not a cabinet member, though he was among the youngest staffers. His job title was “special assistant” to the executive. In this position, his annual salary was $75,000.

Bibb was charged with working on education initiatives, including FitzGerald’s much-hyped college savings program for every child in the county.

Considered one of FitzGerald’s signature initiatives, the college saving program created $100 accounts for county children who enrolled in kindergarten in 2013 and 2014. The goal was to motivate parents to start saving early for college through a tax-free account.  But the plan was ultimately scrapped for a lack of participation from parents.

Bibb told 3News he favored a different model, one similar to the New York-based Say Yes to Education scholarship and support program. Cleveland civic and educational leaders later launched a Say Yes initiative in the city in 2019, which promises college scholarships to virtually every child graduating from Cleveland high school.

“Unfortunately, the county executive at that time had a different opinion and he wanted to do the countywide college savings account program,” Bibb said. “And I did my due diligence as a good public servant.”

While working for FitzGerald, Bibb received a positive performance review, according to his county personnel file. In addition to scoring well on performance metrics, a supervisor wrote a positive review that says in part:

“Justin has been a tremendous asset to the new government. He has shown a remarkable instinct for networking with leaders and stakeholders in the community to carry out his responsibilities …. Justin has shown initiatives and suggested new approaches in a variety of areas, and his analysis of issues has been rigorous and sophisticated. One of Justin’s primary strengths is to not be constrained by conventional wisdom. Challenges for the future include executing some of the identified areas of priority.”

Bibb said he left the job when he believed FitzGerald was considering a bid for Ohio governor. (FitzGerald formally announced many months later, in April 2013. Public speculation began in Nov. 2012, according to news accounts.)

“I eventually left when I realized he was running for governor and I wanted my career go in a different direction and someone else took my role,” Bibb said about his reason for leaving while the college saving program was unrealized. “And I guess the rest is history in terms of the results of that initiative.”

Bibb moved to New York City for a management consulting job with a small company called kgb. There, he worked on business development and held two titles, according to his job history listed in his county personnel file. His annual salary was $111,000.

In 2014, Bibb left New York. He came back to Cleveland with plans to seek a law and business degree from Case Western Reserve University.

But between the time he left New York and started school, he returned to the county to work again as a special assistant to for FitzGerald, Bibb’s personnel file shows. You can review his file below:

While in his first year in law school, Bibb clerked for the blue-chip law firm Squire Patton Boggs, he said.

“It was a phenomenal experience,” he said.  “I learned a ton, but also I realized I did not want to practice big law.”

Later during his last year in law school, Bibb also returned to work for Gallup thanks to his close relationship with the firm’s CEO.

“And so, I was fortunate to get a call from one of my close mentors and someone that I consider family, the chairman and CEO of Gallup, who brought me back to Gallup as a senior advisor and eventually head of the global cities consultant practice at Gallup because he knew about my passion for cities,” he said. “And he wanted me to really help Gallup nationally think about how to use Gallup research expertise to help cities better use data to improve their respective cities across the country.”

After graduating from CWRU with his law degree and a Master of Business Administration, Bibb continued to work for Gallup until December 2018.

Bibb never practiced law and is not a member of the bar.

Bibb left Gallup for a job at KeyBank, where he became “Vice President, Corporate Strategy.”

Bibb said several times during the campaign, including an interview with 3News, that he helped manage a $1.7 billion budget there.

Asked for more detail, he said supported the institutional banking business, which was about a $1.7 billion business.

“One of the things I help lay the foundation for there is about a $2 billion fund to support middle-market businesses and healthcare, senior housing and advanced manufacturing in Northeast Ohio and also nationally and also really help the management team,” he added.

Bibb didn’t stay long at Key Bank. He left just 17 months later to work for Urbanova, a small nonprofit based in Spokane, Washington, that advises organizations and cities on how to measure and track their services.

Working from Cleveland with the title “Chief Strategy Officer,” he said he advised midsize city mayors on how to use data and technology to become more efficient.

Though campaigning, he said he continues to work for Urbanova, including advising Cleveland-based client Digital C, a nonprofit building a network of wireless access in poor neighborhoods across the city.

While Bibb’s job changes have not drawn public scrutiny, his civic work has. He was criticized during the primary by an independent political action committee for missing 13 RTA board meetings.

“According to our analysis, only miss ten meetings over the course of nearly three years of being on that board,” Bibb told 3News.  “At the time, I was on the board of RTA, I was heading up a business at Gallup which required extensive travel. And then I joined Key Bank in 2019, and I was required to be present at certain bank meetings as well.”

Bibb was paid $189,000 in 2019 from his job at KeyBank, Urbanova, and for his duties on the RTA, according to the financial disclosure form filed with the Ohio Ethics Commission. You can see that form below:

He also missed numerous meetings as a member of the Cleveland’s Charter Review Commission. A review of the attendance records contained in the charter’s annual report showed Bibb missed around 40 percent of the votes.

“Again, I was traveling and leading a business at Gallup,” Bibb said.

Just weeks to go before election day, Bibb continues to interview with voters, hoping to land his biggest title to date – that of mid-size city mayor.

“I think the challenges that we see in our city right now are so multifaceted,” he said. “Having somebody that has spent time working in government, working in the private sector and the nonprofit world gives me a unique advantage to not only reimagine what city option look like for post-pandemic Cleveland, but also how do we bring people together in my administration and in this community to solve these hard problems?”

RELATED: 'The most critical election of our lifetimes': Justin Bibb and Kevin Kelley square off in City Club of Cleveland debate ahead of mayoral election