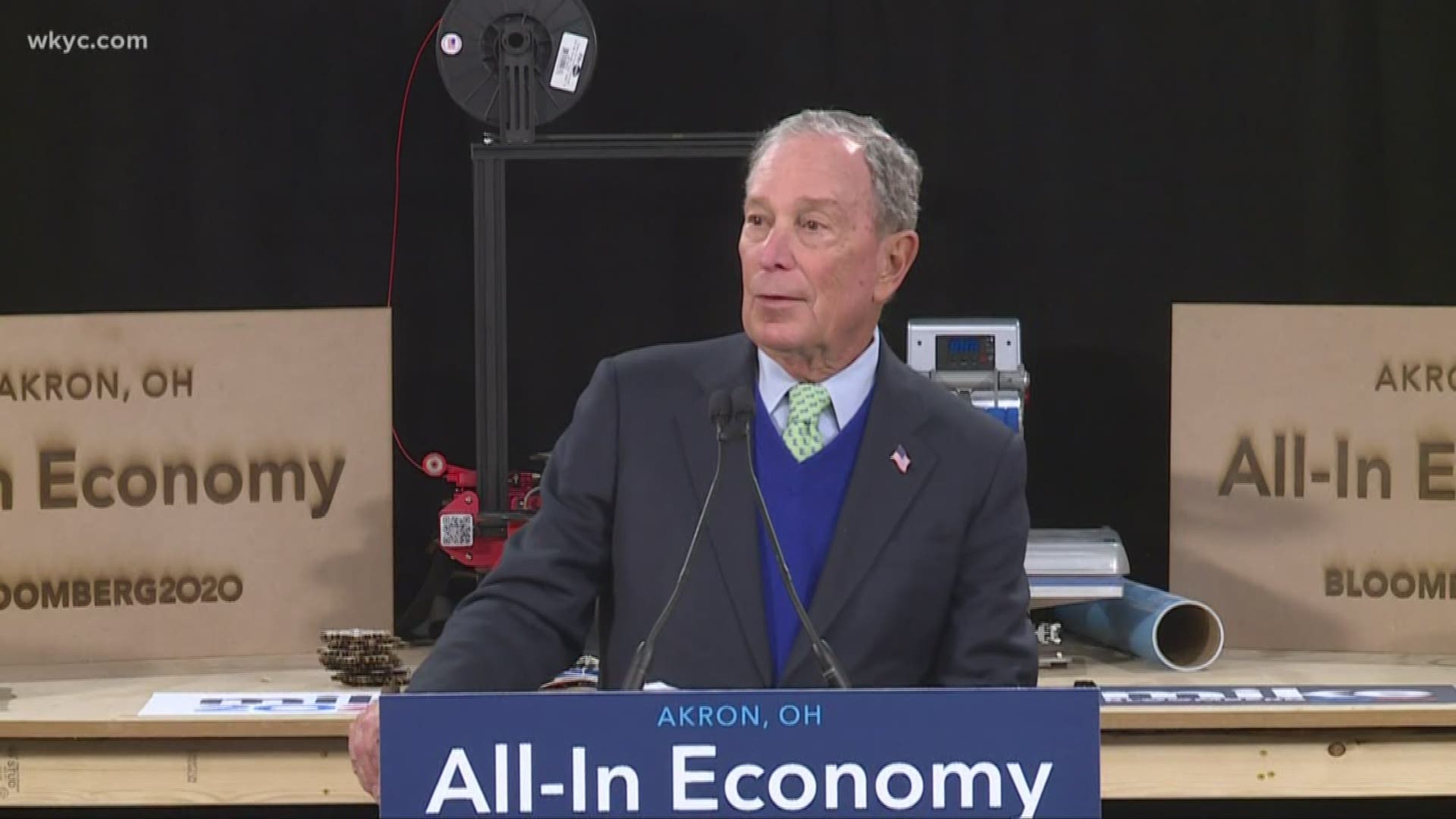 AKRON, Ohio — Ohio will be one of the key battleground states in this year's United States presidential election, but so far candidates have largely skipped the area in favor of early-primary regions like Iowa and New Hampshire.

However, with the Buckeye state's primary just over two months away, campaign stops are likely to become even more common, and one Democratic hopeful has made his way to Northeast Ohio.

Bloomberg's journey to this election has been a relatively odd one: A Democrat until 2001, he switched to the Republican Party that year and was elected Mayor of New York City. During his time in office, crime decreased and the city's infrastructure and environmental standing greatly improved. Yet Bloomberg also received criticism for his then-support of the NYPD's "stop-and-frisk" policy, and while the city's poverty rate remained flat its income inequality was the highest in the nation.

Bloomberg left the GOP during his second term in 2007 and was reelected again as an independent. He left office in 2013 still without a party label, but five years later rejoined the Democrats and committed millions of dollars in donations to help them gain control of the U.S. House of Representatives.

Despite previously saying he wasn't interested, Bloomberg entered the race for president on Nov. 24. He will not compete in Iowa and New Hampshire and will instead focus on the "Super Tuesday" (Mar. 3) states, and the latest Morning Consult poll has him placing fifth among Democratic candidates with 7% of the party electorate.

Bloomberg's campaign platform focuses greatly on gun control, environmental activism, and expanding healthcare for those who need it. But rank-and-file Democrats have, at times, blasted the former mayor for things like stop-and-frisk (which he has since renounced), his enormous wealth (reportedly $56.7 billion), and even his media company Bloomberg News. The latter has received scorn for its refusal to investigate Bloomberg or his Democratic opponents (although it did recently run a report critical of U.S. Sens. Bernie Sanders and Elizabeth Warren), a decision that led President Donald Trump's campaign to ban Bloomberg reporters from its own campaign events.

Akron Mayor Dan Horrigan will join Bloomberg at the event, and on Wednesday he officially endorsed his former New York counterpart for president. Horrigan had previously endorsed Northeast Ohio U.S. Rep. Tim Ryan, who dropped out of the race in October and has since endorsed former Vice President Joe Biden.

You can watch Bloomberg's speech in the player below: