Saturday, October 24 is the first day of weekend hours for early voting in Ohio 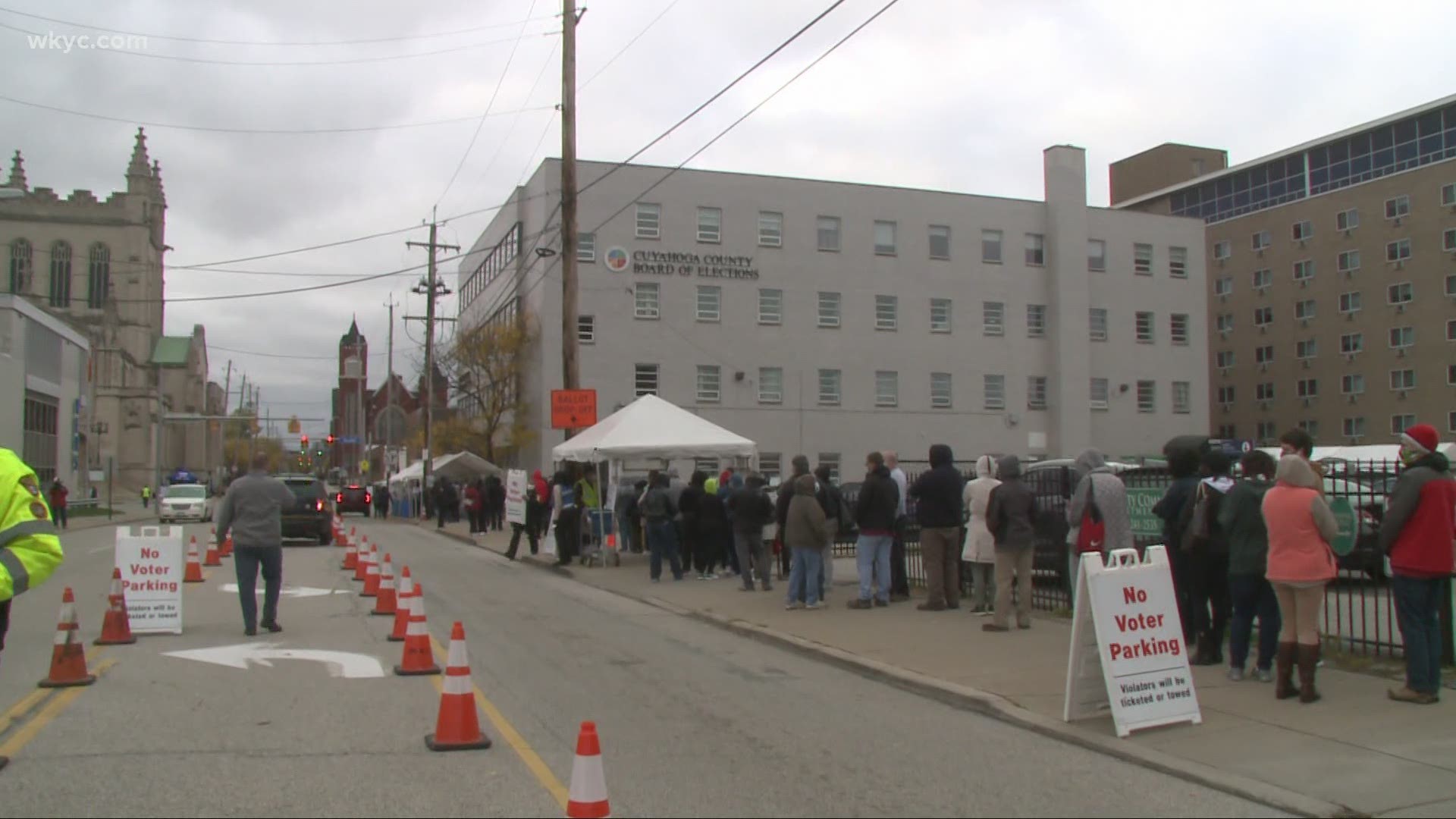 CLEVELAND — The line for early voting at the Cuyahoga County Board of Elections wrapped around the block and extended up the off-ramp for Interstate 90 in downtown Cleveland on Saturday, the first day for weekend hours for early in-person voting.

People showing up to vote wore masks and kept physical distance as they waited to cast their ballots for the 2020 presidential election, as shown in photos posted online by Cuyahoga County Democrats Executive Director Ryan Puente.

It wasn't long before Cleveland Police diverted the line to the roadway, according to Puente, who shared an updated image showing the line along Chester Avenue less than 30 minutes after posting the initial photos of the voters waiting along the off-ramp.

With just 10 days to go before the election on November 3, Cleveland is just one city where there have been long lines to get to the polls early.

While some have celebrated seeing so many people show up to vote as a sign of increased interest in the political process, others have pointed out that these long lines highlight issues with voter access and make apparent that the current system needs to be improved to make voting easier for everyone, especially those who have historically been disenfranchised.

Early voting line at the ⁦@cuyahogaboe⁩ is backed up to 90 pic.twitter.com/vWGukbyd0L

Just to give people an idea of how big the line is. #vote #VoteEarly pic.twitter.com/PypIpa5rTv

This year people have been turning out in record numbers for early voting at least in part due to the ongoing COVID-19 pandemic.

At the urging of officials and medical experts, high numbers of people participating in early voting will cut down on close contact at voting sites on November 3, and therefore help to avoid the possible increased spread of COVID-19.

Voting by mail, another form of absentee voting, is also up drastically around the country, including in Ohio.

For the first time, Ohio Secretary of State Frank LaRose has told county officials to expect up to half of all votes in the presidential election to be sent in by mail, because of the COVID-19 pandemic.

That’s double what we’re used to seeing. Only about 20-25 percent of Ohio voters have typically voted by mail in previous presidential election years, according to the Secretary of State's office.

If you choose to mail in your absentee ballot in Ohio, officials recommend you send it back at least seven days before the election. That date is October 27.

RELATED: Watch | Your step-by-step guide to sending in your absentee ballot in Ohio

RELATED: Watch | Why you shouldn't be surprised (or concerned) if Ohio election results aren't ready on November 3: Legally Speaking