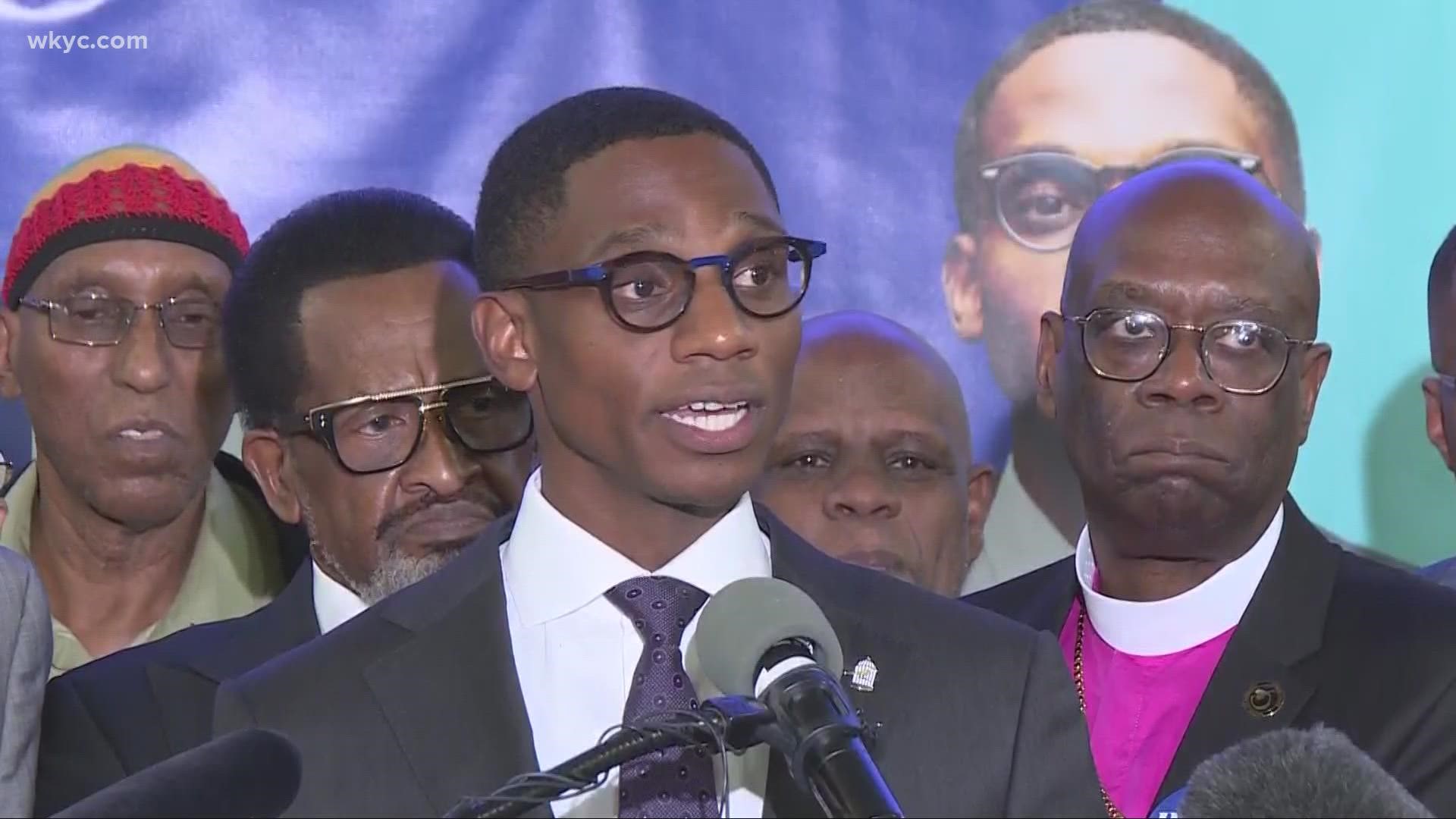 Scroll through our live blog below for real-time updates from election day throughout Northeast Ohio. Be sure to refresh this page often for the most recent information, which will appear at the top of the timeline.

1:55 a.m. As we close out our live blog for Election 2021, we have a special announcement: Cleveland's mayor-elect, Justin Bibb, is scheduled to appear on GO! at 6:45 a.m. You can read more about his victory over Kevin Kelley here.

1:35 a.m. During his victory speech, Justin Bibb started to outline some of his priorities as Cleveland's next mayor. "Tonight we will celebrate. And tomorrow, we're going to roll up our sleeves and do the hard work of moving our city forward in a better direction," Bibb told his supporters. "Not one mayor can solve these problems in isolation. It's going to take a people-powered movement to change our city. When I take that oath in January, I'm not taking that oath by myself. We the people are taking that oath together."

1:00 a.m. We have a rundown of results of several key school board races and school levies from across Northeast Ohio. Click here for more.

12:45 a.m. We've compiled a list of results from all of the Cleveland City Council races. Of note, with current City Council President Kevin Kelley running for mayor this year, his seat in Ward 13 was up for grabs. Ken Johnson's Ward 4 spot was also open after the longtime councilman was sentenced to six years in prison on federal corruption charges.

12:30 a.m. Here's a look at some of the other mayoral results of note across Northeast Ohio:

12:05 a.m. We can now report that Issue 24, the controversial charter amendment that would shift Cleveland police discipline and polices to a civilian-led board and commission, has passed. Cleveland Mayor-Elect Justin Bibb was a strong supporter of Issue 24 and will have the opportunity to appoint members to the board.

11:35 p.m. Click here for a sample of reaction from social media on the election of Justin Bibb as Cleveland's next mayor.

11:20 p.m. During his victory speech, Bibb made a point of thanking the more than 100 student workers who assisted his campaign. "Don't tell me young people can't roll up their sleeves and make change in this city," the 34-year-old Bibb told supporters in his victory speech.

10:42 p.m. As Kelley makes his concession, 34-year-old Justin Bibb has moved up to the microphone to give his victory speech as Cleveland's mayor-elect at Olivet Institutional Baptist Church. You can watch his speech below.

10:34 p.m. Cleveland City Council President Kevin Kelley is addressing his supporters at The Harp on Detroit Avenue. Kelley is expected to concede the race for Cleveland mayor to Justin Bibb. You can watch his remarks in the player below.

10:06 p.m. 3News' Mark Naymik reports that Justin Bibb is expected inside his watch party at Olivet Institutional Baptist Church any minute now. Bibb continues to hold a substantial lead over Kevin Kelley in the race for Cleveland mayor.

Justin Bibb expected inside his watch party at Olivet Institutional Baptist Church any minute now. And yes he gave a lot of thought to the backdrop of being at a church over the old days of hotel ballrooms

9:45 p.m. 3News' Mark Naymik reports that Justin Bibb is not at his watch party at Olivet Inst. Baptist Church. Bibb is watching the results from his war room elsewhere. "Can't imagine he will wait much longer given the trend is in his favor," Naymik added. The margin of lead for Bibb is nearly 10,000 votes over Kevin Kelley.

Justin Bibb is not here at watch party at Olivet Inst. Baptist Church. He's watching from his war room elsewhere. Can't imagine he will wait much longer given the trend is in his favor.

Meanwhile, Justin Bibb continues to lead Kevin Kelley by nearly 9,000 votes in the Cleveland mayoral race. 29% of scanners have been uploaded.

8:57 p.m. Justin Bibb continues to stretch out his lead over Kevin Kelley in the race for Cleveland mayor. Bibb now holds a 7,000 vote lead, having tallied 14,622 votes with 6% of scanners uploaded, while Kelley has 7,672.

8:47 p.m. Our Lynna Lai is at The Harp on Detroit Avenue, site of Kevin Kelley's watch party. Kelley is currently trailing Justin Bibb in the race for Cleveland mayor by 5,000 votes. "As a candidate, you always want voters to show up," Kelley told Lai. "We did what we could to drive out the turnout and the rest is up to the voters."

Cleveland mayoral candidate Kevin Kelley arrives at The Harp for his election night party. Is he disappointed in 2:1 early returns? #3election @wkyc pic.twitter.com/vEBNBtBWHR

Shontel Brown has made her way to the campaign party and is now addressing audience after being elected to Ohio's 11th Congressional District seat. #3Elections @wkyc pic.twitter.com/t0DZSCvBcf

8:05 p.m. Shontel Brown has been elected as the newest representative to Ohio's 11th Congressional District. The Associated Press called the victory for Brown over Laverne Gore just prior to 8 p.m. Brown will succeed Marcia Fudge, who vacated her seat to became Secretary of Housing and Urban Development in the Biden Administration.

7:30 p.m. The polls are now closed. You can track full election results across Northeast Ohio here.

6:15 p.m. Amani Abraham gives us a look at some notable school board races, which have gained more attention due to some hot-button issues like mask mandates, vaccines, and critical race theory.

5:50 p.m. Let's check in with our reporters Marisa Saenz and Will Ujek for some of their Election Day observations on Twitter.

These type of off-year elections historically see around 30% turnout in @CuyahogaCounty and with about 2 hours to go tonight, turnout is just over 22% #3Election @wkyc pic.twitter.com/VZxRJky7Gc

On the ballot tonight: Issue 24.

It's controversial, with voters and organizations either for or against it.

If passed by voters, the charter amendment would shift police discipline, polices to a civilian-led board and commission. #3Election @wkyc https://t.co/fjx7YRqiyu

You can check out Marisa's look at Issue 24 here:

5:17 p.m. We have just over two hours to go until the polls close. 3News' Mark Naymik and Lynna Lai take a look at how the two candidates for Cleveland mayor, Justin Bibb and Kevin Kelley, are spending their Election Day.

4:33 p.m. According to the Cuyahoga County Board of Elections, so far there has been close to a 21% voter turnout with three hours until the polls close. The BOE says there are 877,661 eligible voters in the county and 182,415 ballots have been cast so far.

In Cleveland, 18% of eligible voters have turned out so far. Ward 17 on the city's west side has seen nearly a 34% turnout.

4:22 p.m. Northeast Ohioans have been making their way to the polls throughout this Election Day. Here is a look at our photo gallery.

PHOTOS: Northeast Ohioans head to the polls on Election Day

4:06 p.m. 3News' Marisa Saenz joins Stephanie Haney for a look at Issue 24, which would put the final decision on Cleveland police policies and the discipline of officers in the hands of a civilian-led board and commission.

1:45 p.m. Check out these pictures from 3News viewers as they share their "I voted" sticker. Send us your pics HERE.

Photos: Viewers share their 'I voted' stickers on election day

1 / 6
Viewer submission
It's election day in Ohio, and these voters are sharing their 'I voted' sticker. Send us your picture by texting 216-344-3300 with your name and location included.

11:30 a.m. You have just eight hours left to vote in today's election.

"Thank you all of your support and getting out to vote," he wrote.

Early morning here at the polls!

Thank you all for your support and getting out to vote. @cuyahogaboe Polls close today at 7:30 PM. pic.twitter.com/tfq3ov5b6X

8:15 a.m. Here's what Cleveland mayoral candidate Justin Bibb had to say about his vision for the city when we caught up with him at the polls this morning.

“We cannot afford more of the same," he said. "Our campaign is focused on bold, new visionary leadership and that’s why I’m the best leader to lead this city coming out of this pandemic.”

7:59 a.m. Cleveland voters, you may be wondering what Issue 24 means for you. 3News' Mark Naymik breaks down everything you need to know before making your choice on Issue 24 today.

"Cleveland is in a tough spot right now," Kelley told 3News. "It is critical that we have a mayor that’s ready to be mayor on day one. We’re in a surge of violent crime. We have a very fragile economy, but I’m positive our best days are ahead of us – but we have to get this right.”

Mayoral candidate Kevin Kelley with the thumbs up as he arrives to cast his ballot. @kevinkelleyCLE @wkyc pic.twitter.com/YQlmNT9c0x

Kelley is facing off against Justin Bibb in the mayoral race.

The polls are open in 3…2…1 VOTE! pic.twitter.com/dZd3HAilJK

6:31 a.m. Cleveland mayoral candidate Justin Bibb posts his first tweet of the day. "Let's give our city a chance at a fresh start," he tweeted while asking for voter support.

Today is Election Day! I’m asking for your vote, Cleveland.

Let’s give our city a chance at a fresh start. #CLECantWait pic.twitter.com/Go3VwMvhyb

Vote! Vote! Vote! The polls are now open! Here's everything you need to know about today's election from finding your...

6 a.m. Calling all early risers! We're just 30 minutes away from the polls opening in Ohio.

5 a.m. We break down some of the biggest races in today's election:

3:30 a.m. Check the clock! We only have three hours left until polls start welcoming voters throughout the state.

3 a.m. Don't forget to share your "I Voted" sticker with us! You can send us a picture by using #3Election on Facebook or Twitter. You can also text us your pictures at 216-344-3300, just be sure to tell us your name and we just might use your photo on TV or right here on WKYC.com.

12 a.m. Election day is finally here! Polls will be open throughout Ohio for in-person voting from 6:30 a.m. until 7:30 p.m. If you were hoping to mail your absentee ballot, that deadline has since passed, but you can still deliver it to the Board of Elections up until the polls close at 7:30 p.m.

RELATED: Ohio Secretary of State: Early voting for November election up nearly 18% from 2019