Elections and Registration Chief Richard Barron addressed the accusations during an update on the ballot-counting process Friday evening. 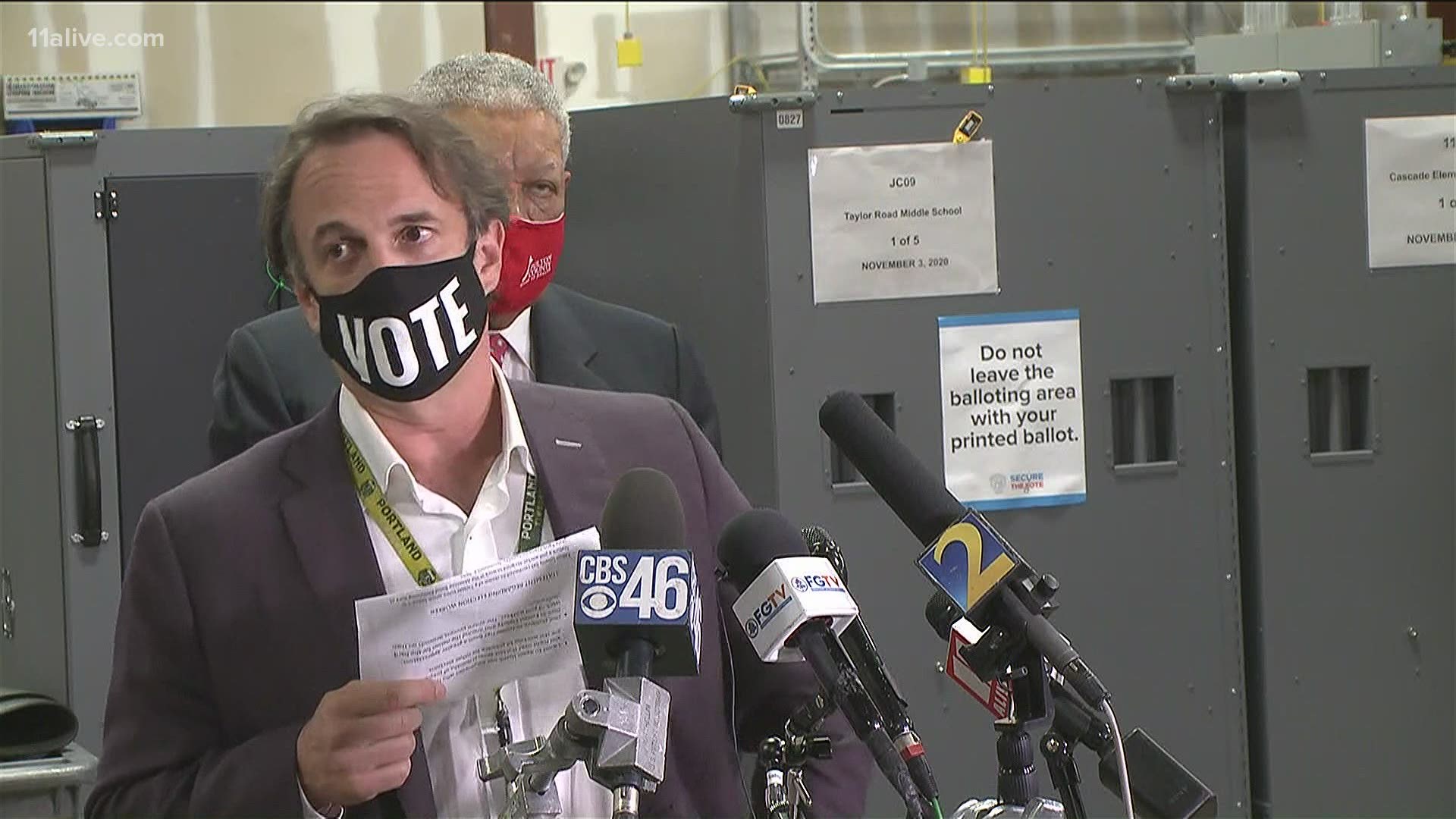 ATLANTA — Fulton County election officials are calling a video that spread on social media, disparaging an election worker and accusing him of crumpling and discarding a ballot, "shameful."

Elections and Registration Chief Richard Barron addressed the accusations during an update on the ballot-counting process Friday evening.

The video, which officials said was posted to Twitter, claimed to show an election worker at State Farm Arena crumpling a ballot while counting was underway. However, Barron said that was "undeniably" not what happened, explaining that what was crumpled was the instruction sheet that came in the ballot packet - not the ballot itself.

"It's been questioned if the employee in the video was discarding one of those ballots," Barron said. "The answer is no - undeniably, no. At no time was the poll worker able to extract the ballot."

Barron said that, at that station, the only action taken is the separation of the outer envelope from the inner envelope. Actual ballot extraction happens at the next stage of the process and is only done by workers assigned to that duty, Barron said.

Barron said the video was taken by another person in the ballot-processing area and uploaded where a caption was added that characterized the poll worker as "agitated."

Barron said he and other election officials reviewed the video, which was later removed from Twitter, and concluded that a ballot was never in danger. Instead, Barron said the paper that was crumpled was just that - a piece of paper, and only included the instructions on how to fill out the ballot properly.

"At no time did you see him remove anything from the envelope," Barron said, noting that a ballot sheet is actually 8 inches by 19 inches - much bigger dimensions than the piece of paper in question.

RELATED: VERIFY: No, there were not ballots found in a dumpster behind the Spalding County elections office

Barron said that, after reviewing the video, he personally contacted the worker, who he said is now in "hiding" because all of his personal information, including his car's license plate, has been spread, and he's getting threats.

He added that the worker in question was actually one of their best and fastest employees on the machine who trained others on how to use it.

"He was very good at it," Barron said. "We depended on him."

Barron added that he expressed "sorrow that all of this has happened to him for simply wanting to be an election worker and doing nothing but a good job at that."

Barron said that no threats had been sent to the Fulton County elections office. He added that there has been discussion about giving the worker protection, but he didn't want to elaborate on that.

Meanwhile, election officials said they are on track to complete their count in Fulton County by Friday night before turning their attention to for runoff elections.