Just eight days before he debates Joe Biden in Cleveland, President Trump is holding a pair of events in Ohio. 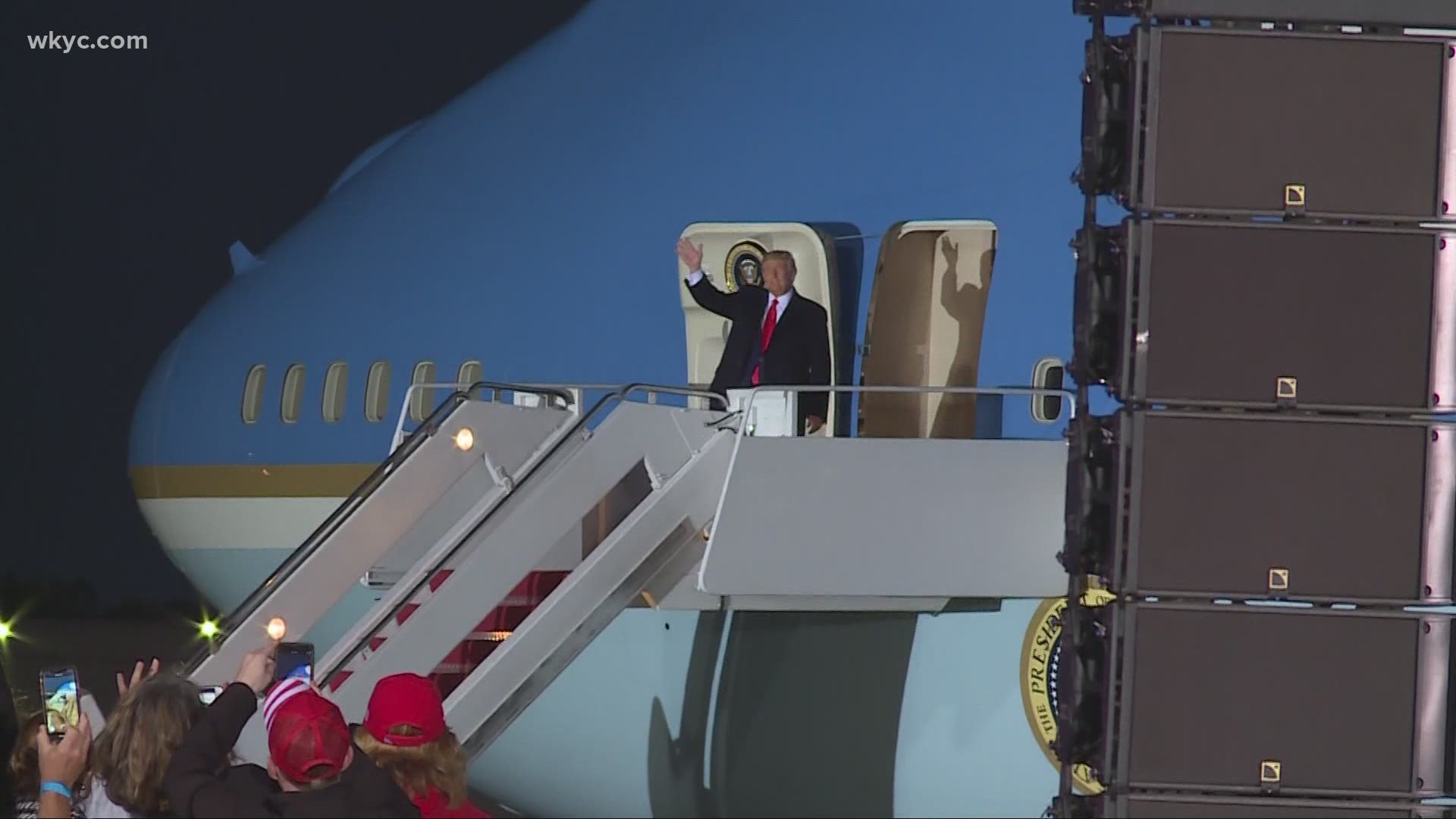 SWANTON, Ohio — President Donald J. Trump is visiting Ohio on Monday, just 43 days before the nation decides who the next leader of the nation will be.

The president is stopping first in Dayton, before heading north to Toledo for a campaign rally this evening. The event is being held at the Toledo Express Airport. 3News' Mark Naymik and Kelly Matter are covering the rally for us.

Doors to the event open at 4 p.m., with the rally scheduled to start at 7 p.m.

Here's a timestamped look at some of the activities taking place leading up to this evening's campaign rally.

President Trump was to start speaking at Grand Air at 7 p.m., but ended up starting late due to his Dayton speech running long. He eventually arrives in Northwest Ohio and spoke for roughly an hour.

Supporters arriving at Monday's campaign rally for President Trump in Swanton went through mandatory temperature checks. Masks were optional and a volunteer was handing out disposal masks while another offered sanitizer.

As President Trump continues to speak in the Dayton area ahead of the Swanton rally, 3News Mark Naymik has a look at what's happening at the Toledo Express Airport prior to tonight's rally. 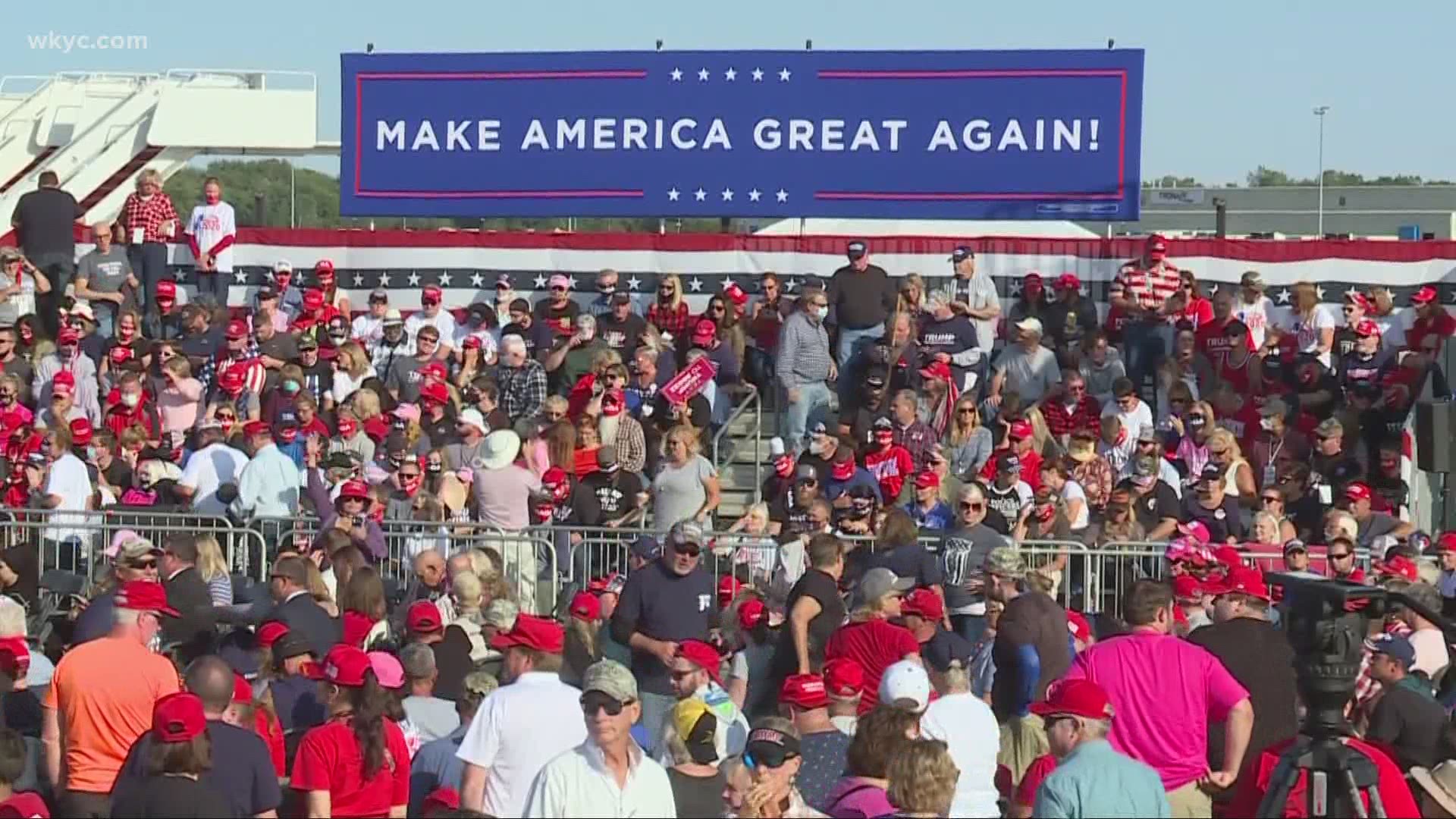 The president has begun his speech. Click below to watch.

President Trump has landed in Dayton and is to give a rally at the Dayton International Airport, focusing on the American worker. Following this rally, Air Force One will head to Swanton.

Gov. Mike DeWine met with the president on Air Force One, according to Lt. Gov. Jon Husted.

Governor ⁦@GovMikeDeWine⁩ on Air Force One talking with ⁦@realDonaldTrump⁩ about Ohio and the election pic.twitter.com/NbPCgZwNgI

President Trump has departed Joint Base Andrews and is heading to his first Ohio stop of the day, at the Dayton International Airport. The day's schedule had him originally set to depart JBA at 3:20 p.m., so as of now he's about an hour behind.

Heading to the Great State of OHIO, will be there soon! #MAGA pic.twitter.com/PawzHeeYbO

Doors are open at the Grand Aire facility at Eugene F. Kranz Toledo Express Airport, where President Donald J. Trump will lead a rally at 7 p.m.

Hundreds of people have waited to get in for hours, lining Airport Highway since early this morning.

At this point, President Trump is supposed to be en route to Dayton International Airport for a rally there before coming to Swanton.

Protesters are out to show their opposition to President Donald Trump as he comes into Eugene F. Kranz Toledo Express Airport. Among the demonstrators are the AFL-CIO and members of the International Brotherhood of Electrical Workers (IBEW). Democratic presidential nominee Joe Biden is featuring a Toledo IBEW member, Larry Tscherne, in his campaign.

Trump supporters lining up at airport in Swanton, Ohio, near Toledo. View from my car on the way in an hour ago. pic.twitter.com/GvG0gO7K23

Check out some more images from Toledo:

President Trump is in Ohio just eight days before he squares off with Joe Biden in the first of three presidential debates in Cleveland.

Even before the president set foot in Ohio, Biden put out the following statement:

"President Trump has failed Ohio. From a bungled pandemic response that has cost jobs and lives, to openly calling for a boycott of Goodyear, to abandoning workers in Lordstown whose jobs he promised to protect — Trump has broken promise after promise and turned his back on the Buckeye State at a moment when we are in desperate need of real leadership.

Ohio deserves a leader in the White House who will fight for workers and families — not just corporations and the super wealthy. As president, I’ll ensure that we not only recover from this crisis and end this pandemic, but that we support the small businesses that fuel our economy and create millions of good-paying jobs. There’s nothing Americans can’t do if given half a chance — and as president, I will help bring this country together so we can build back better than ever before."

Ohio has long been a bellwether. No Republican has won the White House without carrying the state since the advent of the modern two-party system, and no Democrat has since 1960.

Meanwhile, Biden has not announced any plans to make a campaign stop in Ohio before next week's debate. According to The Hill, Biden leads by 2.4 points in the RealClearPolitics average of polls in Ohio.

“Biden hasn’t spent big here in comparison to Trump and despite that, we’re still tied, so that tells you Ohio is ready to go blue,” Ohio Democratic Party chair David Pepper told The Hill. “A good, hard closing pitch here, with visits and television ads all over the state could clinch Ohio for Biden.”

Trump and Biden will square off at the Health Education Campus (HEC) of Case Western Reserve University and Cleveland Clinic on Tuesday, Sept. 29, inside the Sheila and Eric Samson Pavilion.

The debate will be 90 minutes long, airing from 9 p.m. to 10:30 p.m. The event will consist of six 15 minute segments. Fox News anchor Chris Wallace will serve as the debate's moderator.