11Alive Anchor Jeff Hullinger is in the 39th President's hometown of Plains this week. 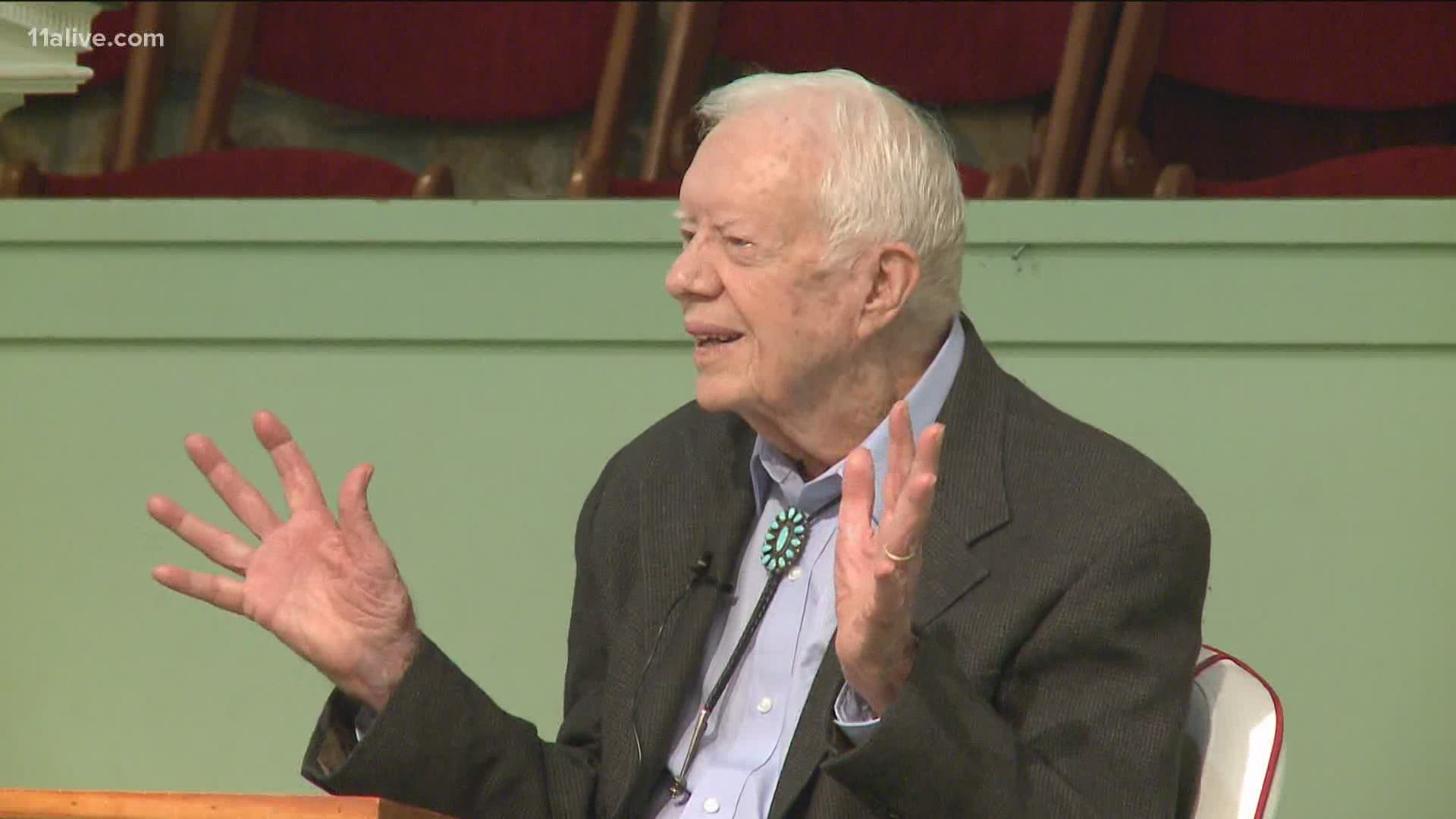 PLAINS, Ga. — One of the most beloved traditions of our region and state has quietly come to an end - former President Jimmy Carter, the world's best known Sunday school teacher, will no longer shepherd the sabbath congregants.

Hope for resumption remains in Plains, Ga., but for now the Covid-19 pandemic, combined with the challenge of advancing age for the nation's oldest living president, has become too much.

Maranatha Baptist Church has about 30 members, but as many as 450 attend when President Carter teaches.

Ms. Fuller has served as the regular Sunday replacement for her uncle, the 39th President of the United States.

“I’m always second guessing what I’m doing, but he is always just a phone call away," she said.

I asked her if President Carter is okay not teaching his class again.

“Probably not,” she responded wistfully.

Maranatha Baptist with President Carter and Mrs. Rosalynn Carter in attendance is unforgettable - the hottest ticket in the state, gnats included.

I attended (with 11Alive photojournalist Stephen Boissy) the week after the Emory University announcement that Carter had brain cancer in 2015.

1,000 people queued in line beginning at 12:01 a.m. for Sunday admission to the church parking lot - slumber in your car until sunrise.

The lesson taught by the former president that August was “Moral Improvement.”

RELATED: Jimmy Carter says we must 'say no more to a racially discriminatory police and justice system'

President Carter, reading from the Gospel of Mathew, in a loud recognizable voice, preached: “You heard it was said that you will love your neighbor and hate your enemy, but I say to you, love your enemies and pray for those who persecute you.”

President Carter spoke of sex, too, eliciting a laugh from the adoring congregation.

In many ways this church is an extension of Carter - even the offertory wooden containers the church passes around were handcrafted by the president.

His niece said he "never once has to look at any reference" when he teaches Sunday School.

"The first time I filled in for him, I told the people, 'I know I’m not who you came to see,' and then he entered," she said. "He had been in another room watching to see how I did.”

Two years ago, President Carter was having difficulty standing for 45 minutes to teach his class, but he didn’t want to sit.

“I had to do a lot of convincing,” said Jill Stuckey, Superintendent of the Jimmy Carter National Historic Site. “He came over for a normal Saturday night meal, I didn’t invite anyone over. I told him, 'You need to sit to teach, how can I help?'"

After a long silence, Carter offered Stuckey a solution.

She called Dr. A Wayne Johnson, a homecare specialist, and he contacted Russell Brown. Within two weeks, President Carter had the “Rocket Chair," which rises in height to the lectern.

Church members have prayed for his recovery, and his son Chip told me Wednesday his father has resumed swimming in the backyard pool and making calls on behalf of the Carter Center to donors.

If they're over for good, his 40 years of Maranatha Baptist Sunday school teaching are certainly an indelible part of Georgia lore.

Ms. Fuller offered: “I will always bow down to him as a Sunday school teacher.”

But you never know - President Carter might surprise us again.

Trailblazer C.T. Vivian remembered as resilient warrior during the movement

Brenda Wood's Last Word on Congressman John Lewis: 'We didn’t deserve him. But Lord, did we need him!'

Elder to ancestor: Spirit, strength of John Lewis etched into many hearts, reunited with Dr. King

'So extraordinary on so many levels' | Atlanta remembers the life of C.T. Vivian