Here's how Ohio House members voted on the impeachment inquiry against President Trump, along with their reactions

The vote was 232-196, with all Republicans against the resolution and two Democratic defectors joining them. 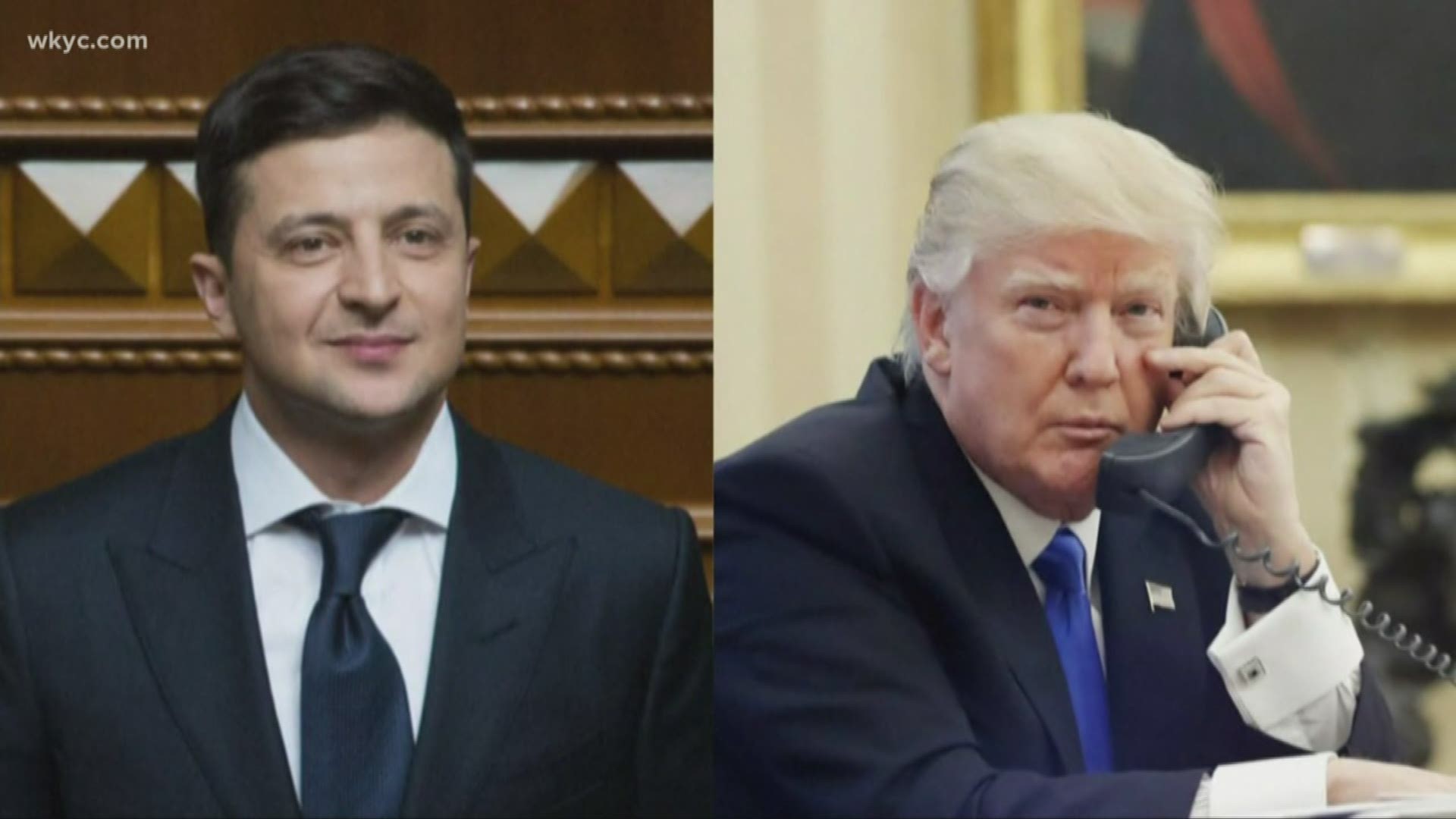 Democrats rammed a package of ground rules for their impeachment inquiry of President Donald Trump through a sharply divided House Thursday, the chamber's first formal vote in a fight that could stretch into the 2020 election year.

The vote was 232-196, with all Republicans against the resolution and two Democratic defectors joining them.

“It absolutely is a big deal. Impeachment is not something we’ve seen many times in U.S. history,” said Justin Buchler, a political science professor at Case Western Reserve University. “We have not seen a set of impeachment hearings like this where the President is running for re-election as this is happening.”

To see how your local House members voted, see the chart below:

The vote laid down the rules as lawmakers transition from weeks of closed-door interviews with witnesses to public hearings and ultimately to possible votes on whether to recommend Trump's removal from office.

The action also took on more than technical meaning, with each party aware that the impeachment effort looms as a defining issue for next year's presidential and congressional campaigns.

Democrats spoke of lawmakers' duty to defend the Constitution, while Republicans cast the process as a skewed attempt to railroad a president whom Democrats have detested since before he took office.

“The Senate is absolutely assured to acquit Donald Trump. The Senate is majority Republican. The Republican party is maintaining a wall of unity. There is no chance, regardless of any evidence that comes out, that they will convict him, none whatsoever,” said Buchler.

Here are statements and reactions from Northeast Ohio's representatives:

Rep. Jordan, one of the presidents most-vocal defenders, retweeted a statement from the Republicans on the House oversight committee (of which he is a member) calling the impeachment process a "sham."

He also spoke on the House floor in opposition to the inquiry.

"This political show-boat resolution does nothing to undo the previous five weeks of secretive meetings, selective leaks, and Soviet-style inquisition from Nancy Pelosi, Adam Schiff, and their cronies. The American people are catching on to what’s been happening behind closed doors in the Capitol basement. Democrats aren’t interested in due process or anything resembling fairness. Their goal is to remove the President from office and disenfranchise the 63 million Americans who voted for the him, and they don’t really care how they do it.

"The American people deserve to hear the facts. Yet, it’s hard to believe, under this resolution now even fewer Members of Congress will be permitted to participate in this fabricated investigation – which means even more information about this impeachment sham will be hidden from the American people. Other than voting to declare war, there is no more consequential action the U.S. House can take than the process to impeach the President.  This is nothing more than spite against President Trump, and what’s is going on in the Democrats’ secret bunker is a shameful embarrassment to our country."

Rep. Gibbs fired off a series of tweets on the matter, which we have compiled into this statement:

"Today’s vote is the culmination of Democrats’ dishonest three-year effort to impeach President Trump, which started before he was even sworn in. This isn’t about Ukraine or some imagined abuse of power.

"Democrats have been seeking revenge on President Trump for winning the 2016 election, as evidenced by the widening Department of Justice investigation into the origins of the fake Russia collusion story. This impeachment resolution is not only illegitimate on the merits, it is a gross distortion of the process itself. Speaker Pelosi is empowering Adam Schiff to continue an unfair process that stops House Republicans from executing any real subpoena power and denies the President basic due process.

"Sham, illegitimate, a farce, disgraceful; today’s resolution was all of the above."

"Today, the U.S. House of Representatives voted to pass a resolution providing a clear path forward on the public-facing phase of the House impeachment inquiry into the conduct of President Donald Trump. The passage of this resolution will allow the American people to view public-hearings and discover firsthand the abuses of power carried out by President Trump and his Administration, in addition to any attempts to cover them up.

"Many credible witnesses with direct knowledge of the conduct and actions of the President and those close to him have come forward. They include decorated military veterans and career foreign service officers – people who have dedicated their lives to serving the United States. They have detailed disturbing breaches of U.S. national security and a shadow foreign policy campaign pressuring a foreign country, Ukraine, to interfere in a U.S. election in favor of President Trump’s reelection. Specifically, the witnesses have reaffirmed the original whistleblower complaint that the United States, at the direction of President Trump, withheld vital military assistance as a means to pressure Ukraine into investigating conspiracy theories relating to President Trump’s likely electoral opponent. If this proves to be true, the actions are illegal and violate our Constitutional traditions of separating partisan political gain from U.S. foreign policy.

"This resolution provides a pathway for such individuals to testify publicly and be questioned on a bipartisan basis by members of both political parties. Together, we will unveil the truth, the whole truth, and nothing but the truth relating to any abuses of power carried out by the President and his Administration."

"This is a critical moment in our history. The President of the United States pressured a foreign nation to investigate his political opponent while withholding crucial American support. Make no mistake: not only is it an abuse of power, it is illegal. The testimonies from those present for the call and the demands for the investigation of a political opponent are damning. President Trump continues to put his personal agenda above the American people.

"The President’s lawless actions threatens our free and fair elections, our national security, and our democracy. We must send a strong, unequivocal message that President Trump and his Administration are not above the law – there are consequences to their corrupt actions.

"The President is not a king. In the very first article of the Constitution, the Founding Fathers created Congress to write our laws and act as a check on the Executive Branch. This duty is not held lightly. Every member of Congress takes an oath to support and defend the Constitution of the United States, and it is now more important than ever before to remember this pledge. I urge my colleagues on both sides of the aisle to remember the sacred oath we swore to uphold. We must put country before party."

"As a former prosecutor who firmly believes in due process, I cannot condone an inquiry that began before receiving bipartisan approval from the entire House, has been conducted without a shred of transparency and has allowed a single political party to play the role of judge, jury and executioner. While Speaker Pelosi and House Democrats continue to focus on this partisan proceeding to undermine the President rather than on working across party lines to deliver results for Americans, I will continue to focus on the issues that matter to Ohio families like combating the opioid epidemic, restoring the Great Lakes, expanding jobs and opportunity, lifting wages and ensuring our veterans get the health care they deserve."

"Today, I voted NO on the impeachment inquiry. The impeachment of any president is as serious as anything we can vote on as a member of Congress because it represents a fundamental break in the system of self-government that defines our nation. At a minimum, impeachment requires a fair and open process that affords due process and transparency to the President and the American people. The process to date, and that articulated in this resolution, fails on all fronts. Simply put, I refuse to support an impeachment inquiry that robs the President and House Republicans of due process and is conducted solely at the discretion at the Democratic majority."

This story will be updated as more statements come in.