Senate Bill 113 seeks to legalize the safe use of consumer grade fireworks in Ohio on and around major holidays. The bill now heads to the Ohio House. 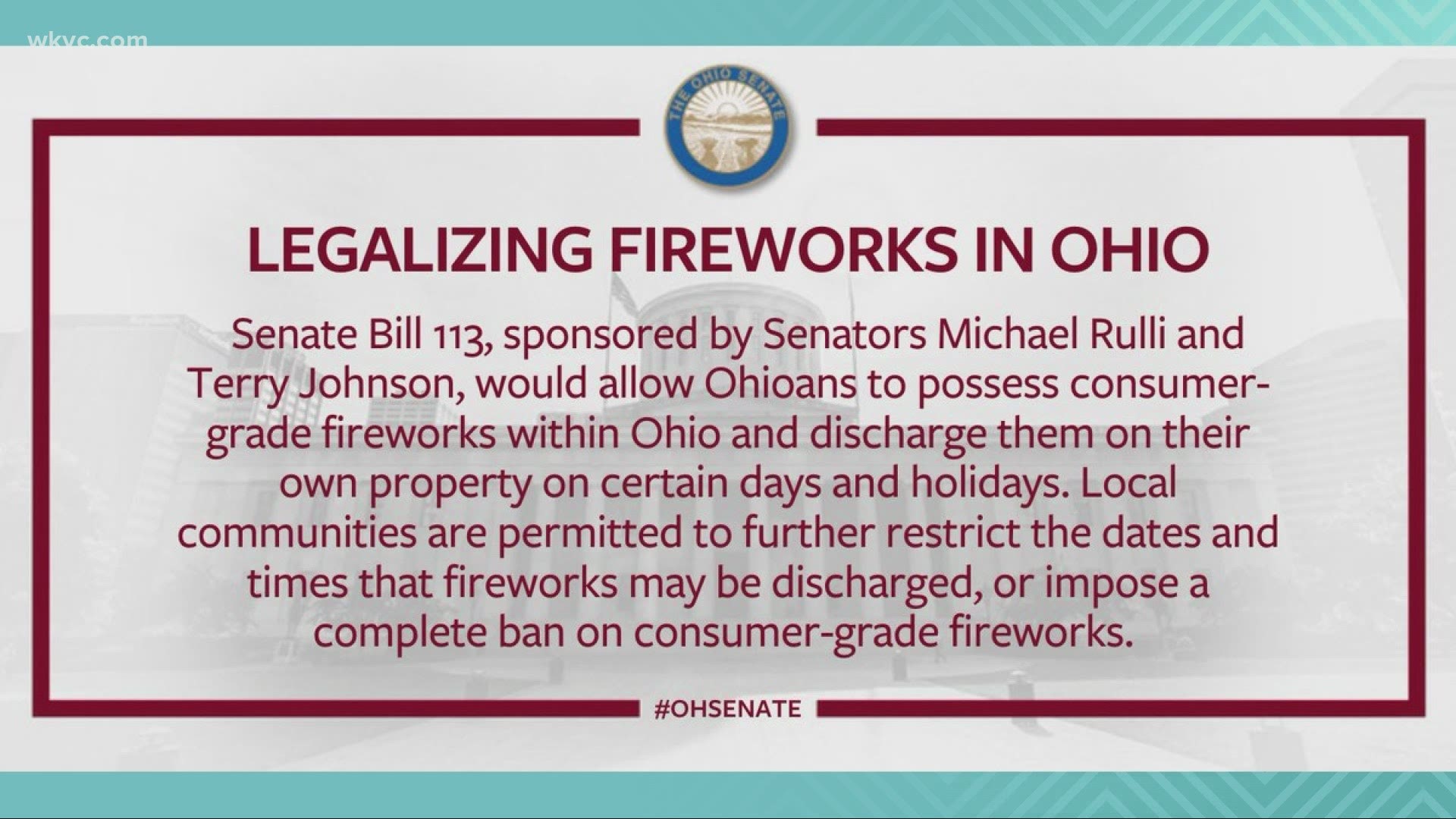 COLUMBUS, Ohio — The Ohio Senate has passed a bill that would allow residents to legally celebrate certain holidays, inclduing Fourth of July weekend, by shooting off fireworks.

The bill, sponsored by Sen. Michael Rulli (R-Salem) and Sen. Terry Johnson (R-McDermott), would allow Ohioans to discharge consumer-grade fireworks in the state on the following days:

"Patriotic Americans have been, albeit illegally, shooting off fireworks in this state for as long as I can remember, without the safety measures included in this legislation," said Rulli. "With proper parameters and safety precautions, Ohioans will soon be able to celebrate our holidays safely, while enjoying this time-honored tradition."

The bill would establish the Ohio Fire Code Rule Recommendation Committee to advise the State Fire Marshal regarding rules around local firework usage, sale and manufacturing. The committee would be made up of the State Fire Marshal, local fire chiefs, a local police chief, and members from the Ohio State Pyrotechnics Association, Ohio Optometric Association, Prevent Blindness Ohio, Ohio Pyrotechnic Arts Guild, Ohio Chapter of the American Academy of Pediatrics and the Ohio Council of Retail Merchants.

Senate Bill 113 would still allow local municipalities to restrict or ban the use of fireworks in their communities.

“I was delighted today with the bipartisan vote that Senate Bill 113 received in the Ohio Senate. For too long Ohioans have been saddled with a consumer-grade fireworks law that was largely ignored and was all but unenforceable," Johnson said. "My bill, if enacted into law, will once again allow Ohio citizens to legally celebrate a number of major holidays—and most especially our American Independence Day—by setting off fireworks.”

"The bill also has huge implications for northeast Ohio businesses, like Phantom Fireworks, who have employed hundreds of people in Youngstown for decades," added Rulli.

Senate Bill 113 will now go to the Ohio House for further consideration.