The legislation removes a legal requirement that people try to retreat from a confrontation before shooting to kill in perceived self-defense. 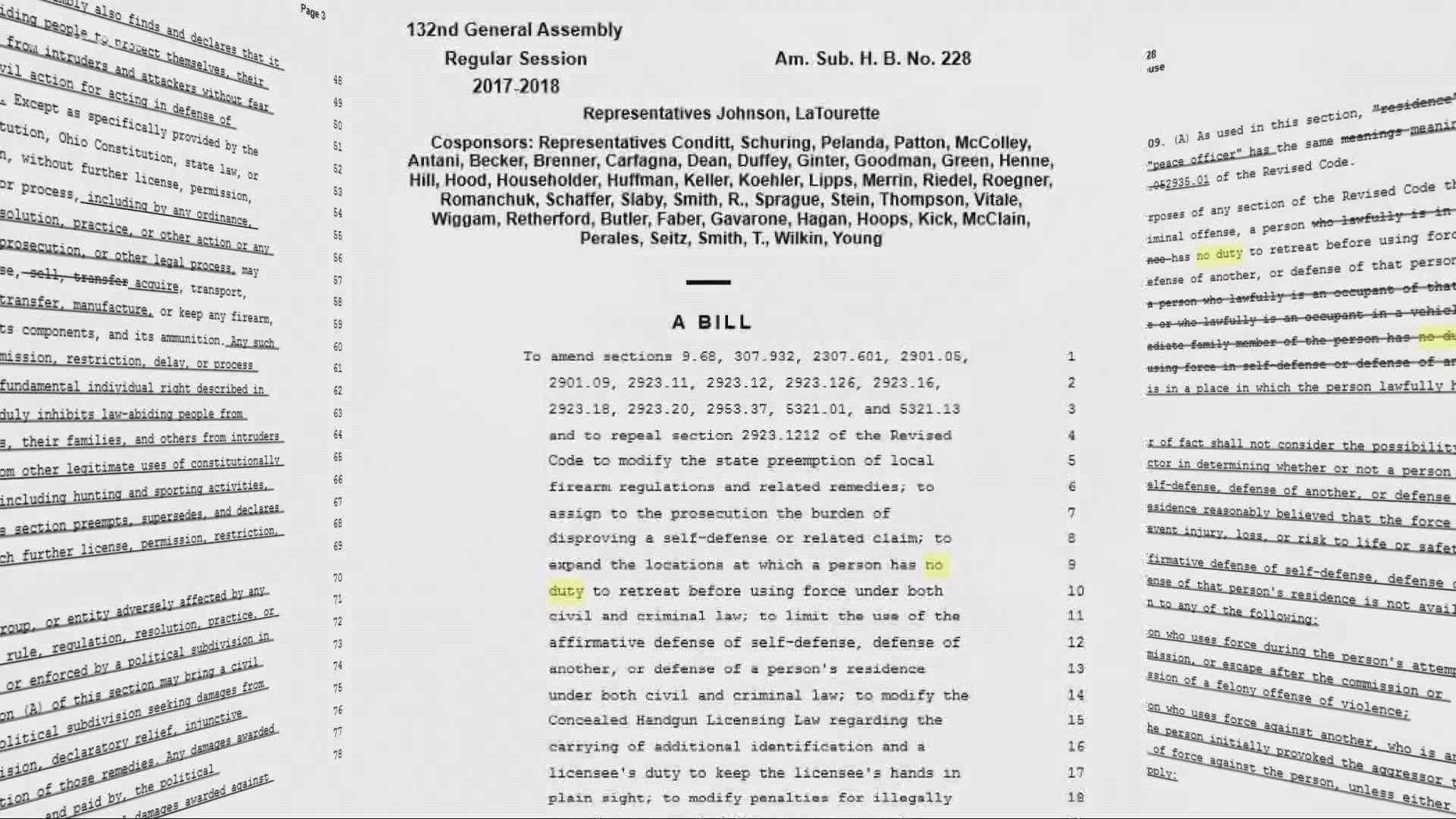 COLUMBUS, Ohio — The Ohio House passed legislation late Thursday evening that removes a legal requirement that people try to retreat from a confrontation before shooting to kill in perceived self-defense.

The Senate agreed on Friday to amendments to the bill and it moves to Ohio Gov. Mike DeWine's desk.

The legislation, commonly referred to as “stand your ground,” passed the House in a 52-31 vote around 11:30 p.m. Thursday. On Friday, the bill passed 18-11 with four Republicans opposing the changes.

If it becomes law, it rescinds what’s known as the “duty to retreat” from a confrontation before using a firearm in self-defense.

It's unclear what DeWine will do next. He has said that lawmakers shouldn't take up other gun bills until some protections are passed, but none of his proposals were part of SB 175.

In 2008, lawmakers removed the duty to retreat in a confrontation in one’s home or vehicle, a concept known as “castle doctrine.” Senate Bill 175 would expand the castle doctrine to almost any place where a person is lawfully present.

If a person does shoot someone else and claim self-defense, the legislation says a court cannot consider the possibility of retreat when assessing whether that person used force in self-defense.

House Republicans passed the bill despite opposition from law enforcement, prosecutors, and anti-gun violence activists. In doing so, they handed a major victory to the firearms lobby and gun owners’ associations. A small handful of Republicans joined Democrats in opposing the legislation.

Rep. Kyle Koehler, R-Springfield, introduced the proposal as an amendment to an unrelated piece of gun legislation after his original bill stalled out in committee. The parliamentary move served to circumvent a committee vote.

Koehler said it’s illogical to place a legal duty to evade a perilous situation on a gun owner who’s facing a threat from someone with no regard for the Ohio Revised Code.

“If someone is bent on killing another individual, the laws we write on paper do not matter,” he said.

Democrats said the policy incentivizes shootouts when avoiding violence is an option.

Several of them, including four Black women from the caucus, said the legislation has major racial implications. A jury, they said, is more likely to take a white person’s claim of self-defense at face value than it might a Black person’s.

Conversely, a Black person is more likely to be perceived as a threat than a white person, they said.

Rep. Erica Crawley, D-Columbus, asked Koehler directly on the floor whether he had spoken to any Black people about their thoughts on the legislation. Koehler, in response, said he considers a Black child he’s helping raise anytime he acts as a lawmaker.

The legislation still needs approval from the Senate, which hastily scheduled a Friday floor session (Thursday was thought to be the last lawmaking day of 2020). A Senate committee passed a stand your ground bill last week, but the full chamber has not yet voted on it.

Gov. Mike DeWine remains an X-factor on the matter.

After the 2019 Dayton shooting left nine dead and 27 injured, DeWine pushed for legislation to bolster the background check system used before a firearms purchase, toughen laws on people in possession of guns if they’ve lost the legal right to wield them, and expand a legal process for courts to temporarily seize guns from people in mental health crises.

The legislation, barring a major shift among lawmakers, is all but dead for the session. DeWine told the Cincinnati Enquirer this week that lawmakers shouldn’t move on gun-rights expansions but didn’t say whether he’d veto stand your ground.

After campaigning on the merits of the legislation, Rep. George Lang, R-West Chester Twp., abstained from voting. House Speaker Bob Cupp. R-Lima, attributed it to a potential “conflict of interest.”

Lang owns a business that sells liability insurance for gun owners should they shoot to kill in self-defense. He operates the business along with two executives of Buckeye Firearms Association, a local gun-advocacy organization.

One of those two, Dean Rieck, testified in support of the same legislation before a Senate committee last week.

“If you honestly believe you are about to die, it is cruel and absurd to expect you to attempt escape, delaying your own self-defense and putting your life in even greater danger,” he said.

The Ohio Association of Chiefs of Police has opposed the proposal, arguing it allows for gun violence where a non-violent escape is possible.

Lou Tobin, a lobbyist with the Ohio Prosecuting Attorneys Association, has said the bill is predicated on inaccurate assumptions that prosecutors file homicide charges against people who justifiably use force in self-defense.

Speaking to a Senate committee, he echoed a common criticism from Democrats that there is no crisis in the criminal justice system of unwarranted homicide charges against people who used force in self-defense. He called the proposal a solution “in search of a problem.”

At least 25 states do not require retreat before shooting in self-defense, according to a May research brief from the National Conference of State Legislatures.

In 2018, the Ohio House and Senate voted to override Gov. John Kasich on a similar issue, amending the law to place the burden of disproving a self-defense claim on the prosecution.

That same year, guns killed 1,555 Ohioans, according to data from the CDC.

The Ohio House passed legislation late Thursday evening that removes a legal requirement that people try to retreat from a confrontation before shooting to kill in perceived self-defense. https://t.co/uEyK3MTpU7