President Donald Trump spoke from the Whirlpool plant in Clyde this afternoon before attending a campaign fundraising event at the Shoreby Club in Bratenahl. 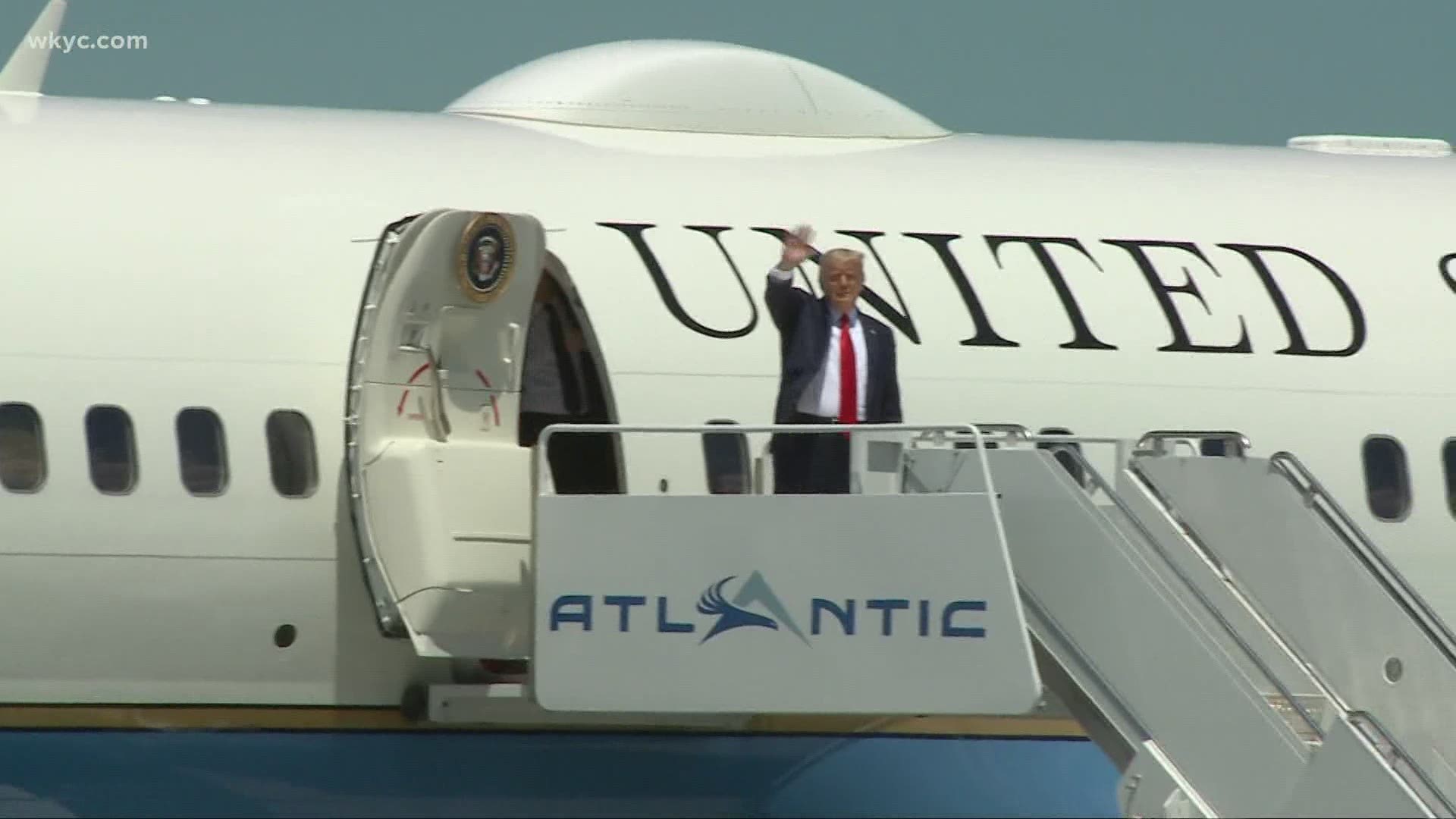 BRATENAHL, Ohio — President Donald Trump was in Northeast Ohio today for a campaign fundraiser and a visit to a local plant.

Here's a breakdown of everything you need to know about his visit... Stay with 3News throughout the day for the latest coverage of President Trump's time in Northeast Ohio.

President Trump exited Air Force One at Burke Lakefront Airport shortly after 1:30 p.m. where he made some comments to the crowd who was there to welcome his arrival. During some brief comments, President Trump addressed the news that Ohio Gov. Mike DeWine had tested positive for COVID-19. Read his full statement HERE.

Upon leaving the airport, his first stop will be in Clyde where he will tour the Whirlpool facility. White House officials said the visit is meant to demonstrate how Trump "continues to put American jobs first." He will make comments from the Whirlpool plant around 3:15 p.m.

RELATED: Trump to be 1st president to visit Sandusky County in over 100 years

President Trump was joined by Lt. Gov. Jon Husted, Rep. Jim Jordan, and several others as he journeyed from Cleveland to Clyde to tour the Whirlpool plant.

.@realDonaldTrump says @WhirlpoolCorp is a “shining example of what tough and smart policies can do to bring jobs to communities all over Ohio.” @wkyc #wkyc #whirlpool #election2020 #ohio pic.twitter.com/NQrZ1HbS3Q

You can watch President Trump's remarks from Clyde in the player below.

Ohio Gov. Mike DeWine was expected to welcome President Trump upon his arrival in Cleveland, but he is instead returning home after his office reported he tested positive for COVID-19.

President Trump's visit to Northeast Ohio ends with a 6 p.m. campaign fundraiser at the Shoreby Club in Bratenahl. As 3News' Mark Naymik reported earlier this week, all in attendance have been told they will receive a rapid COVID-19 test. All guests must have a negative test for permission to attend.

“We feel that knowing every person on our club property on Thursday has tested negative for COVID-19 is an important safety assurance for our members and our employees,” an e-mail from the Shoreby Club told its members.

Thursday’s event is a joint fundraiser for Trump's re-election campaign and the Republican National Committee, Naymik reports. Tickets cost a minimum of $5,600. Guests who contribute $100,000 will have more exclusive access to the president and other GOP officials.

As the president prepared to head to Bratenahl for the fundraiser at the Shoreby Club, our cameras caught images of activists from both sides of the political spectrum holding signs and chanting.

Activists from both sides of the aisle, as well as voices from the #BLM movement, are awaiting @realDonaldTrump’s visit to Bratenahl, OH this evening for a fundraising event. pic.twitter.com/oOfZa8bCLR

President Trump's return to Ohio comes as a new poll shows Joe Biden is currently leading the state by four points. Biden also has a focus on Ohio with a virtual event scheduled for Thursday afternoon hosted by Senator Sherrod Brown in Cleveland.

The presidential election will be held Tuesday, Nov. 3.