Some protesters were able to enter the building, but police got everyone out. A total of five protesters have been arrested. 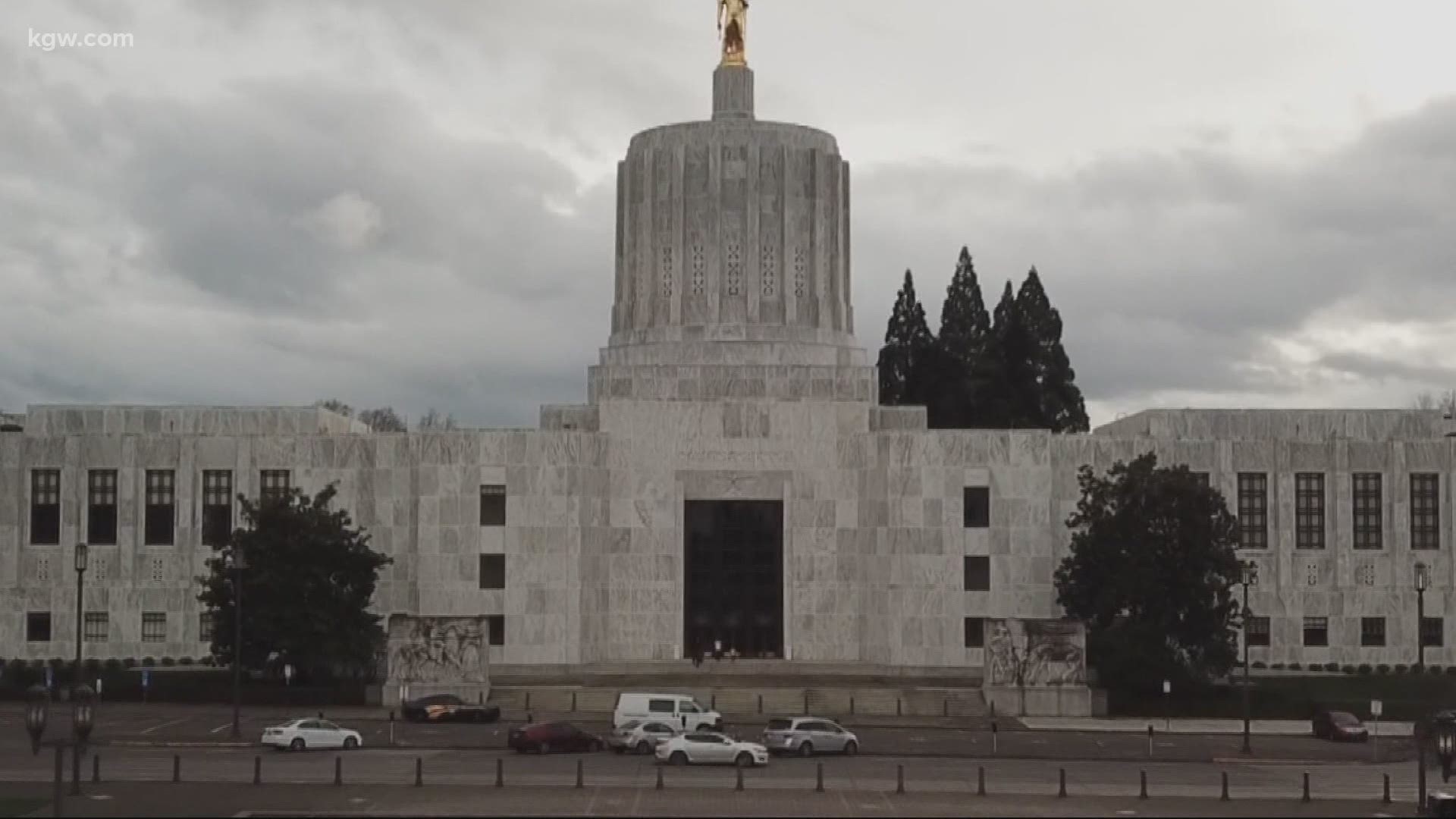 SALEM, Ore. — A man accused of allegedly assaulting reporters during a protest at the Oregon Capitol earlier this month was arrested Sunday after he turned himself in to law enforcement.

Jeremy Roberts, 40, allegedly attacked two reporters during the Dec. 21 protest, according to the Oregon State Police (OSP). He turned himself in Sunday at 4:15 p.m. Roberts was lodged at the Marion County Jail and faces the following charges: criminal mischief, disorderly conduct, assault, harassment and probation violation.

A group of protesters gathered at the Oregon Capitol on Dec. 21 after lawmakers convened for a special legislative session to address COVID-19 and wildfire relief.

Some protesters entered the building, which is closed to the public due to COVID-19 restrictions. OSP said in a press release that at least two protesters used chemical agents against troopers, including Lyles, who was accused of spraying officers with bear spray.

OSP declared an unlawful assembly. Police told protesters to leave the area or they would be arrested. Salem police closed nearby streets temporarily.

Video shared on social media showed a crowd of protesters scattering after tear gas was reportedly deployed near a Capitol entrance.

Oregon State Police have deployed blue tear gas at protesters standing at the entrance of the Oregon State Capitol. Most scattered away from the doors, but remain on the grounds. #SalemOR #orleg pic.twitter.com/TRdH1S590C

Two journalists, Brian Hayes of the Salem Statesman-Journal and Sergio Olmos of OPB, said they were assaulted by protesters Monday afternoon. OSP identified Roberts as the person that attacked the two reporters.

Around 1:30 p.m. police took Pruitt into custody after they said he tried to break into the Capitol by breaking a window of one of the doors. By 2:30 p.m., Salem police began to reopen nearby streets.

OSP said troopers did not deploy any tear gas.

Lawmakers were at the Capitol on Monday to address several bills during the one-day special legislative session, including a proposed eviction moratorium, a restaurant relief package, a bill to protect schools from some coronavirus-related lawsuits, and a measure for COVID-19 and wildfire response and recovery.

As of 5:35 p.m., the Oregon Senate and House had passed HB 4401, a six-month extension on the eviction moratorium and plan to pay landlords up to 80% of what they're owed. And both chambers also passed SB 5731, the bill that allocates $800 million for COVID-19 and wildfire relief.

#BREAKING: Oregon Senate passes 6-month extension on eviction moratorium, plan to pay landlords up to 80% of what they're owed (HB 4401 -- passed by the House earlier tonight). Both chambers also passed SB 5731 which allocates $800 million for COVID/wildfire relief. #HeyDan

Courtney said he'd return to the Capitol on Tuesday to talk with police about how protesters were able to get inside so close to lawmakers and what security upgrades may be needed as a result.

The protest was organized by far-right group Patriot Prayer in opposition to statewide COVID-19 mandates, and group leader Joey Gibson objected to the legislature meeting without public input.

"State legislators will B there in person but they illegally closed the meeting to the public," Gibson said in a tweet. "We have an amazing opportunity to confront these criminals hiding from the people."

"The Oregon State Police encourage people to exercise their First Amendment rights, but it must be lawfully," OSP said. "Please, discontinue the acts of vandalism or destruction of property. If you commit a crime you will be subject to arrest." 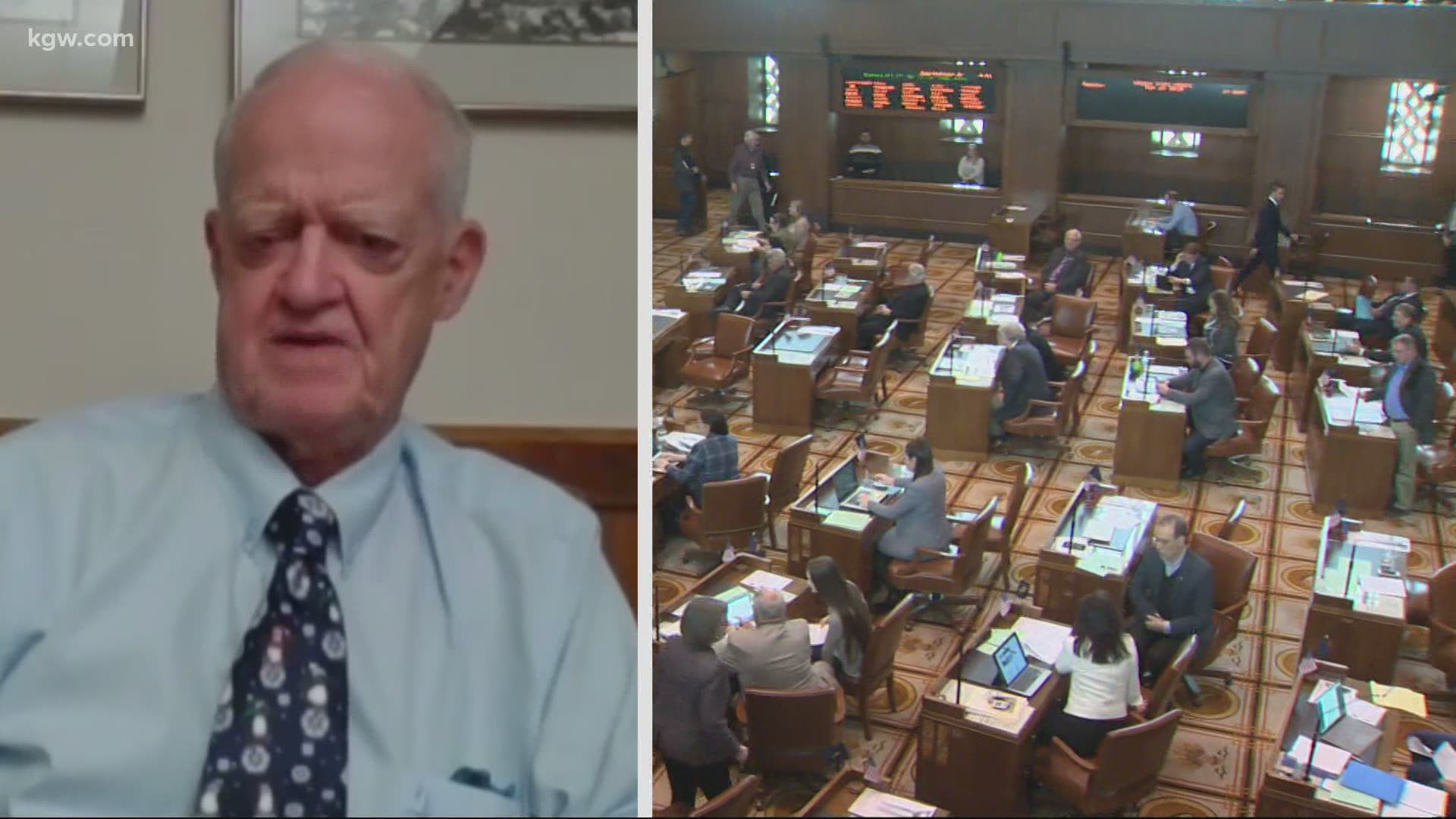