President Trump called for the boycott after reports surfaced that Goodyear told employees that they could not wear "MAGA" or Blue Lives Matter attire. 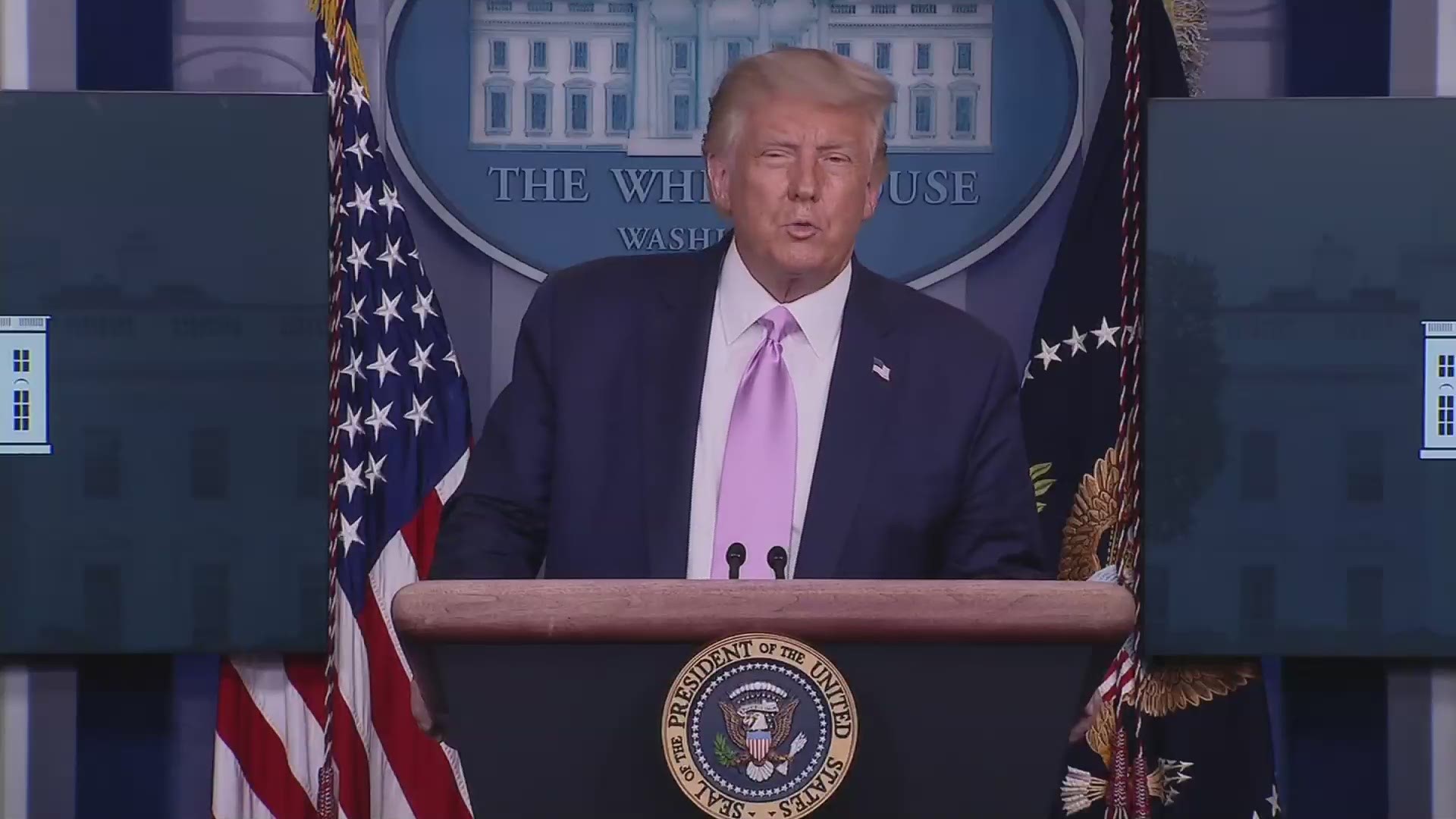 COLUMBUS, Ohio — President Donald Trump held a briefing at the White House on Wednesday and addressed his tweet from earlier in the day calling for a boycott of Akron-based Goodyear.

"I'm not happy with Goodyear," Trump stated when asked about his tweet. "What they're doing is playing politics. The people who work for Goodyear, I can tell that I poll very well with them."

A Goodyear employee told a TV station that the company's zero-tolerance policy was "discriminatory." The worker claimed the photo was taken during a "diversity training," but Goodyear said Wednesday that wasn't true.

"There's something wrong with the top of Goodyear. What the radical left does is they make it impossible for people to do business if they're Republican or conservative," Trump added during his briefing. "They’re using their power over these people, and these people want to wear whatever it is that we’re talking about. And so I would be very much in favor of people who don’t want to buy there. And you know what? They’ll be able to get a good job because we set a jobs record over the last quarter. ...You’ll be able to get another good job.”

When asked point blank if people should boycott Goodyear, Trump responded, "I don't know. It's up to people whether they buy Goodyear, but I wouldn't recommend it."

He was also asked if he would insist that his presidential limousine, 'The Beast,' swap out its Goodyear tires. “I would swap them out, based on what I heard. We’ll see what happens,” Trump said. "Look, you’re going to have a lot of people not wanting to buy that product anymore. We'll see."

RELATED: Amid President Trump's call for Goodyear boycott comes revelation that his limousine 'The Beast' uses tires from Akron-based company

"Goodyear became the focus of a conversation that created some misconceptions about our policies and our company," Goodyear said in a statement shared on Twitter. The company added that its corporate office did not release the zero-tolerance slide and it was not part of a "diversity training class."

Goodyear added that it has zero tolerance for any forms of harassment or discrimination, so it's been a longstanding corporate policy to ask employees to "refrain from workplace expressions in support of political campaigning for any candidate or political party, as well as similar forms of advocacy that fall outside the scope of racial justice and equity issues."

The company said it appreciates the "diverse viewpoints" of all its more than 60,000 employees and has "always wholeheartedly supported both equality and law enforcement."

Goodyear also said it's not "anti-police."

"Nothing could be further from the truth, and we have the upmost appreciation for the vital work police do on behalf of our shared communities. This can't be said strongly enough," Goodyear's statement said.

Yesterday, Goodyear became the focus of a conversation that created some misconceptions about our policies and our company. Goodyear has always wholeheartedly supported both equality and law enforcement and will continue to do so. pic.twitter.com/oO6jUg2rTR