Is mail-in voting safe? Yes, and Ohio's system is among the best in the country, LaRose says

Ohio's secretary of state held a virtual town hall and answered absentee voting questions, what will happen on Election Day and more. 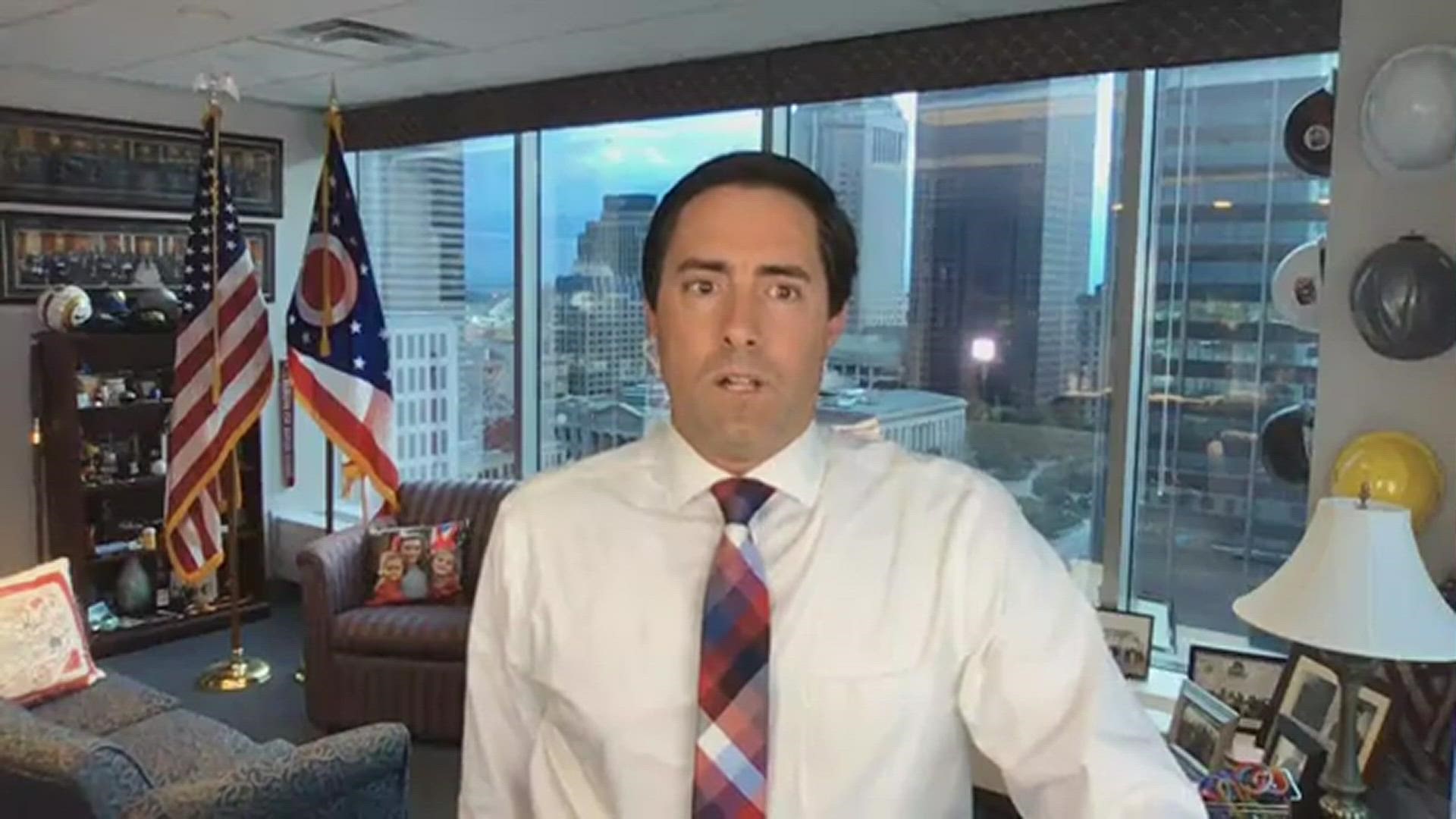 COLUMBUS, Ohio — When it comes to November's election, Ohioans have three choices for getting their ballots in, and "all of them are good choices," according to Ohio Secretary of State Frank LaRose.

As long as Ohioans are registered voters - the deadline this year is Oct. 5 - you may choose among early voting, mail-in/absentee ballots, or in-person voting.

Ohio has permitted four weeks of in-person early voting for quite some time. This year, early voting starts Oct. 6.

Ohio has four weeks of voting by mail, also known as absentee voting. For nearly 20 years, Ohio has had this option, and LaRose said about 25% of Ohioans tend to exercise this option in most elections.

"We know that that number is going to even higher this year," he said during a virtual town hall on Monday.

The secretary of state's office is sending out 7.8 million absentee ballot request forms to every voter in the state, following years of precedent, LaRose said. These will be mailed around Labor Day weekend.

The secretary also mentioned that Ohio is a model for such voting, noting the nonpartisan Brookings Institution recently rated Ohio as one of the top states in the nation for its absentee voting process.

We also have "safe and secure in-person Election Day voting," LaRose said. "This to me has to be one of the options available to Ohioans."

In the spring, the state Legislature opted to have an all vote-by-mail primary because of the rise and spread of COVID-19, and LaRose said he hopes that is the only time that ever happens.

LaRose said 35,000 people need to work as poll workers in order for the in-person option to work. With the pandemic this year, traditionally older poll workers are opting out of working the polling location due to health concerns.

LaRose is calling upon a "new generation" of poll workers to take up the flag and keep the engine of democracy humming. There are several practices his office is putting into place to help ensure this happens.

1. Ohio Supreme Court has granted permission for lawyers to receive CLE credits if they sign up to be a poll worker.

2. Youth at the Booth lets 17-year-olds sign up to be poll workers.

3. Companies are being encouraged to participate in Give a Day for Democracy to give their workers a paid day off to be a poll worker.

4. Work a Day, Donate Your Pay encourages charities and nonprofit groups to partner with boards of elections and lets poll workers' salaries be donated back to the groups.

If you're interested in signing up to be a poll worker, which is a paid position, you can visit voteohio.gov/defenddemocracy

Sign up to be a poll worker at https://t.co/5oqAuPTjLa 🇺🇸 pic.twitter.com/pcCNg7dLTR

How to register to vote?

You can register online at voteohio.gov. Have your driver's license or state-issued ID available to expedite the process. You must register by Oct. 5 in order to be able to vote in the Nov. 3 General Election.

Keeping people and their votes safe

Guidelines will be coming soon from the SOS in collaboration with the Ohio Department of Health and the Centers for Disease Control and Prevention to each of the 88 county boards of election as far as what precautions in-person polling locations must take to keep voters safe during the pandemic. LaRose pointed to the ingenuity of Ohio businesses such as grocery stores for the steps they've taken to protect customers and workers, noting he expects such inventiveness will be seen at the polls as well.

LaRose also said the office is focused on vote security and cybersecurity in order for Ohioans to trust that their elections are accurate. He said Ohio ranks at the top of the heap when it comes to cybersecurity but it is still something that his office pays a lot of attention to.

Voting machines are tested before their use and they are not connected to the internet, LaRose said, and a full audit is conducted after the election to make sure things came out in an "honest and forthright way," LaRose said.

LaRose derided the Ohio Democratic Party's lawsuit that calls for absentee ballot requests to be made available via email, saying email is antiquated and creates a security vulnerability with the attachments that be emailed in. LaRose instead said he wants to see a secure online portal be made available where people could request an absentee ballot, rather than via email.

"There's no good reason not to be a voter in Ohio," LaRose said. "People have risked their lives in combat zones to cast a ballot. ... Nobody should sit it out."

What is the status of the request of Attorney General Dave Yost as to the use and number of dropboxes?

"Every county board of elections has a secure dropbox. They're usually in a well-lit area with a video camera on them. They have to have video surveillance on them 24 hours a day. These boxes are serviced by a bipartisan team of staff members from the board of elections that goes them every day and cleans out the ballots or the request forms that have been received. It's a good convenience and every board of elections has one. Many of them are drive-up locations," LaRose said.

"The question that has come up, though, is some counties have said we want to add a second one, or a third one, or a fourth one. The problem with this, though, is the Ohio Revised Code is very gray on this. The Legislature has spoken on this previously, but it was only a temporary measure and when the Legislature spoke on it, they said 'one per county.' What I don't want to do is jeopardize dozens of counties around the state potentially adding extra boxes and ending up in a protracted lawsuit as a result of it, which would be expensive and distracting as we are leading up to Election Day. I've asked the attorney general for a legal opinion on this, if we can add extra dropboxes in each county, and if he says we can and that it's legal to do that, then I'd be happy to have the county bipartisan board of elections make that decision on if that's best for their county or not to add additional dropboxes.

Is absentee balloting secure, is it trustworthy?

"I know the president has raised concerns on this. The president has to be focused on all 50 states. We're just focused on Ohio. So while the president raises concerns that may be valid in other states, especially states that are just now figuring out how to do absentee voting, remember that Ohio's been doing this for 20 years. We're pretty good at it," LaRose said.

"Here in Ohio, there are four reasons why you know your ballot is secure and this is a trustworthy system:

1. We remove deceased voters from the voter rolls and we maintain accurate voter lists. I apologize to no one for maintaining the accuracy of our voter rolls," LaRose said.

2. You have to authenticate who you are before you even request your ballot. That includes your full name, date of birth, last 4 of Social Security number, and driver's license/state ID

4. You can track your ballot in Ohio, just like tracking a package, on voteohio.gov."

"Ohioans have grown accustomed to this (sending out absentee ballot request forms). This is something we have done in even number elections back to 2012. ... Here's another reason why it's crucial - we expect turnout in the 2020 election to be the highest we've seen, bar-none. What that means is that for us to have that safe and secure experience on Election Day, we need to have a lot of Ohioans take advantage of early voting and vote by mail. Of course, it's a safe option for those who are concerned about leaving their house (due to COVID-19). ... Voting by mail is a secure process in Ohio. Sending out the request form is a very straightforward proposition.

"By the way, we're doing it entirely with federal money. We're not spending a dime of state money. I was able to access federal CARES dollars that we're using for the entirety of that mailing and I believe it will serve Ohioans well."

Why is ballot harvesting a bad idea?

"It has led to documented cases of fraud in other states. It has never been used in Ohio. A Republican was prosecuted for this in North Carolina. ... It's not something that is acceptable when either party does it."

I heard non-citizens can vote in Yellow Springs. Is that possible?

"Not if I have something to say about it and I do have something to say about it," LaRose said. "We got this question from the Greene County Board of Elections that said the village of Yellow Springs wants to put an issue on the ballot that says that they were going to allow non-citizens to vote. We advised the village of Yellow Springs that that's not constitutional, but that's not our job to reject a ballot initiative. As long as they got enough signatures they can put it on the ballot, even if it's clearly unconstitutional.

"So, they did. They put it on the ballot and they got it passed. ... It's a foolish idea and it's a dangerous idea. Just a couple of weeks ago, we got a letter from the Green County Board of Elections that asked what do they do, since the village of Yellow Springs wants them to accept voter registrations from non-citizens and be ready to accept votes in local village elections from non-citizens. I sent a very strongly worded letter back to them in no uncertain terms ... only U.S. citizens can vote," LaRose said.

"Now, let's be clear: As a nation, we welcome legal immigrants to come to this country for hundreds of years. It's been a great thing for the prosperity of this nation. ... But to allow non-citizens to vote is really in many ways an insult to those who have earned their citizenship. And for those who are not U.S. citizens ... they could be committing a felony. That could jeopardize their process if they are working to become a citizen or subject them to deportation."