Stunning tree of lights is gift to I-35 holiday travelers 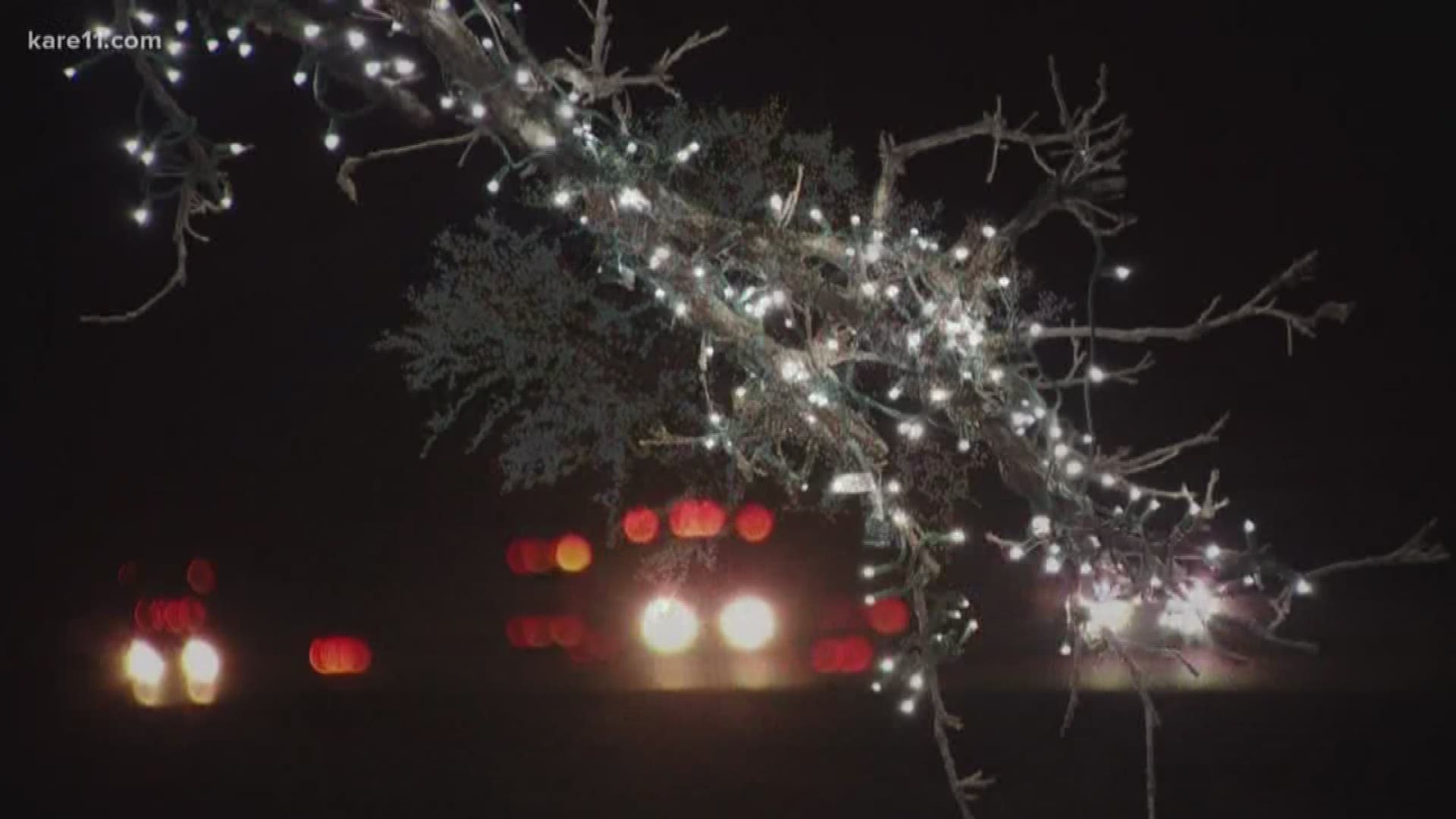 FARIBAULT, Minn. – For years Jerry Lageson has endured the unrelenting din of I-35 traffic flowing within a few hundred feet of his home.

But Jerry won’t be cursing holiday travelers further filling the freeway. He’s too busy giving them a gift.

“I’d say millions of people have probably seen it,” Jerry says of his creation.

“It's a red oak,” Jerry clarifies. “It was fairly small when I bought the property, but I thought, that tree's going to amount to something someday.”

Inspired by a similar tree near MSP International Airport, Jerry put up his first lights seven years ago. This fall, he spent three nights in a rented lift adding 12,000 more.

“I had a guy stop the other day from Iowa,” Jerry says. “He said, ‘This tree is almost spiritual.’ I don’t know if it’s spiritual, but it does lift your spirits up a little bit.”

Each year Jerry collects cards, letters and cash donations from his mailbox. The senders thank Jerry as they write of the warm feelings evoked by his tree.

“All of them are people I've never met,” Jerry says. He wonders sometimes how they manage to find his address.

The letters are nice, but it was a phone call that’s proven to be Jerry’s most memorable interaction with a fan of his tree.

The call came from Nottingham, England. Andy Black had seen Jerry’s tree online. Inspired, Andy had already begun putting up lights on the plum tree in front of his home.

“Totally out of the blue,” Jerry says. “You can’t make it up.

Nor could Jerry make up what happened just this week, when Andy and his wife Lisa flew from England to Minnesota to see Jerry’s tree in person.

“It's better than what you can imagine it to be,” Andy says.

Then the two tree men – members of a select group - compared notes on lights, wiring and electrical consumption.

Credit: Boyd Huppert, KARE 11
A semi passes by Jerry Lagerson's tree along I-35 near Faribault, Minnesota

“I’ve always admired the way that Americans dress their lights on their houses and I wanted to find a way to dress the lights on my house,” Andy says.

Credit: Boyd Huppert, KARE 11
Andy Black rests a hand on the tree he flew from England to see

The Brit gave Jerry’s tree a pat along its trunk and said, “To most people, they probably think this is a normal tree, but this is a special tree.”

Jerry doesn’t disagree. “In this dark world we can use a little light,” he says.

Note: Jerry's tree will remain lit through New Year's Day. It is located along I-35, just south of Faribault, Minnesota.

Watch more of Boyd Huppert's Land of 10,000 Stories below:

On a mobile device you can watch more Land of 10,000 Stories here.

Submit your story ideas to Boyd by filling out the form below.

App Users, if you are having trouble seeing the form, please click here.